Hello MarketClub members everywhere! I've just returned from a short mini break over Christmas and New Year's to see the market crashing down this morning. This should come as no surprise to anyone as I have been talking about the negative chart implications that we were seeing in the major indices last year.

As far back as November 16th I warned that a weekly Trade Triangle had given a signal to move to the sidelines in the DOW index. That same Trade Triangle signal was followed a short while later in both the S&P 500 and the NASDAQ. The rocky start to the New Year should have come as no surprise to MarketClub members. 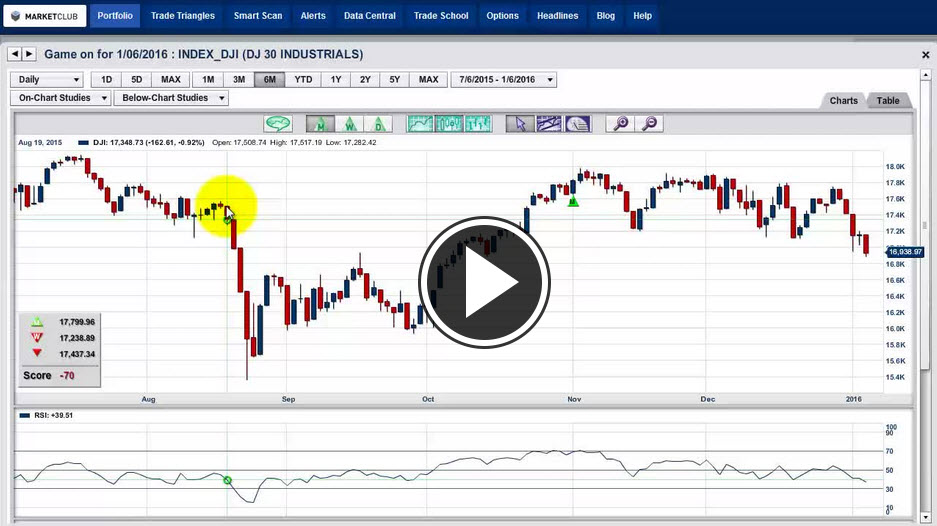 Concern over China along with a weak equity market here in the US was enough to push Gold (FOREX:XAUUSDO) to its best levels in some time and in doing so gave an important Trade Triangle buy signal. The Trade Triangle buy signal occurred on Tuesday, January 5th at $1,081.55. This is the first buy signal in gold in approximately three months and I believe it is one you should pay close attention to. My upside target for gold is the $1,130 to $1,140 area.

Just as gold was making new highs, Crude Oil (NYMEX:CL.G16.E) was making 11-year lows, breaking below the $35 a barrel level this morning. With all the continued unrest in the Middle East and the friction between Saudi Arabia and Iran, it is just a matter of time before this whole area spins into economic chaos which could eventually be the driving force to lift the price of crude. However, that is a ways off at the moment and I still have a downside target of $28-$30 for a barrel of crude oil.

As I write this commentary before the market has opened, Apple Inc. (NASDAQ:AAPL) is flirting with breaking below the $100 a share level. Way back on the 16th of November the Trade Triangle technology gave a signal to be on the sidelines, the price then was $112.27, over 10% ago.

I stated then that I thought the smartphone market was saturated - now Apple has cut back 30% on its iPhone 6 and 6s factory orders. While the smartphone market may be saturated, the Apple watch market may be growing to the detriment of FitBit Inc. (NYSE:FIT) which was down 18% yesterday. Once again the Trade Triangle technology indicated that FitBit was in a downward trend before yesterday's 18% drop.

In today's video, I will be examining all the major indices, several stocks and of course the gold market that looks to be heating up right now.

It is good to be back from the holidays and we have a really exciting quarter ahead of us, full of opportunities.