Today when I saw that precious metals started to rise after a correction I detected on the charts my favorite pattern called the Bull Flag. This pattern can change the targets depicted in my earlier gold and silver posts, better say enrich them.

Gold is in the blue multi-month uptrend. The angle is not as sharp as it was at the start of the year, but it still can take gold to fresh highs.

The Bull Flag Pattern consists of two parts – the first is the flagpole (highlighted in vertical orange line) and the flag itself (orange trend channel). Gold reversed from the downside of the flag and now is trying to break up the midline at the $1272 level.

The true breakout means that the market should take off from the resistance located on the upside of the flag at $1289 to accomplish the pattern. The target is located at the distance of the flagpole applied to the breakout point. It was marked by the dashed horizontal orange line at $1365. It means that the current market is strong enough to take the price above both the previous post target at $1307 and beyond the upside of the blue uptrend at $1345. 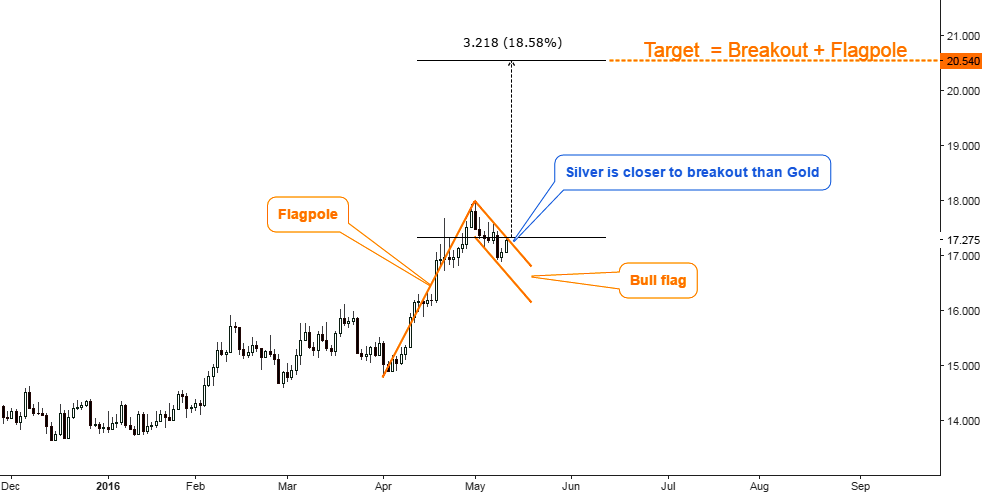 Silver is strong indeed as you can visually compare the position of the price of both metals in the flag and you can find out that this metal is closer to the breakout point than gold hence it's stronger.

The ultimate bullishness of silver is also seen in a larger flagpole and a shorter flag. I will dedicate one of my next posts to the Gold/Silver ratio to illustrate the strength of the silver.

The price should break and close above the $17.30 level to confirm the pattern. The target is located at the distance of the flagpole applied to the breakout point at $20.54, a sweet target for the bulls as we will change the ten ($20) and it’s a very important psychological factor. This ambitious mark will beat the previous silver post’s target set at $18.23.

You can see from both charts that sentiment is still bullish. I mean tactical short term view. Top metals move upside without serious retracement which would be marked as medium-term corrections. I updated the goals for you to keep up with the market stream. I expect the medium term pullback after we complete these flags. Let’s see what it will bring us.