The charts tell the story, says precious metals expert Michael Ballanger, adding that the mining and metals market have the forward momentum of Secretariat as he clinched the Triple Crown. 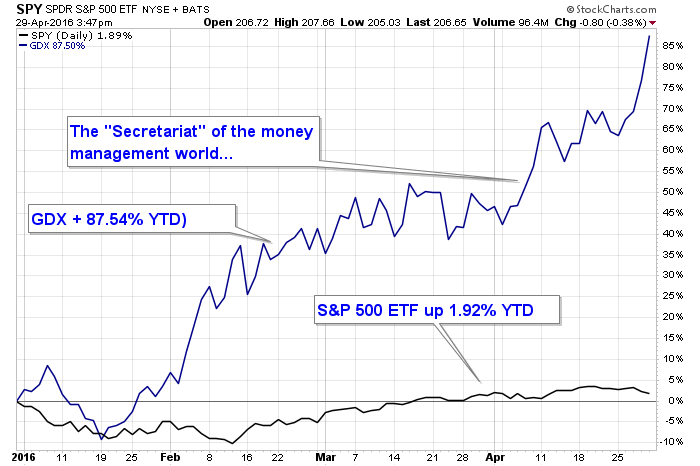 Today's missive is going to be exceedingly "chart-infected," because many times a picture is worth one thousand words, especially in the case of the precious metals markets these days. I put on a 2% hedge prior to the FOMC meetings and the Wednesday press release and have since removed it, taking a small hit versus the mindboggling leap in my GDXJ position and associated advances in the juniors (KAM.V over $2). That's the beauty of a "hedge" versus a "short," and that is precisely what I have been thinking since the COT moved above 200,000 Commercial net shorts a few weeks back, with the gold and silver prices refusing to retrace.

One look at the chart below and you are immediately struck by the "shock and awe" campaign of "no corrections," where the market doesn't allow traders to buy back their favorite mining positions at prices representing only the meagerest of percentage pullbacks. In fact, after nearly 40 years of trading the miners, I have never ever seen a market with such awesome power behind it that is truly such a wonder to behold. The HUI has exploded out of the post-FOMC gate like Secretariat at the Belmont Stakes in 1973. (If you ever want to see an incredible feat by a horse, watch the Youtube clip of the race that clinched the first Triple Crown in 25 years AND was won by an incredible 25 lengths.) Just as that horse left the pack at the halfway point of the race, precious metals are massively outperforming the SP by a vast margin, and are forcing the money managers to be dragged into the market, teeth clenched and fingers clawing the ground.

The miners are all collectively on wheels again and all of the mining brokers and analysts are all busy replacing 10-year-old business suits and paying off loan sharks and second and third mortgages taken out during the tail end of the 20112015 bear market. Six-year-old BMWs and Benzes are being turned in and brand-new ones are being leased off the lot as visions of corporate-finance-bonus sugarplums dance in their heads. Those financial advisors out there feeling the heat are the ones still flogging Netflix and Apple and the biotechs, but even Facebook, which hit a record high today, is still only up 11%.

As I reflect back upon the frustration of 20112015, and as I think about that mind-boggling Jan. 19 massive capitulation by the sovereign wealth fund (from northern Europe) that slammed the HUI to under 100, it is really only a modest degree of recovery that has revisited us these past few months. From where I sit, the TSX Venture exchange looks terrific and is on a tear, and since this is the exchange that houses all of the explorers and developers, it is only just beginning to get "legs." From the next two charts, it is imperative to put everything into its proper context.

Take a glance at the six-year chart of the TSX Venture exchange; despite a huge rally so far in 2016, it is still down a horrific 72% since 2011. However, the TSX.V topped back in May 2007 at 3,363, and that may suggest there is a lot of room for serious money to be made in the higher-quality explorer developers (like Kaminak Gold Corp. [KAM:TSX.V]) over the balance of 2016. Additionally with the GDX up over 87.5% versus the TSX.V up 43%, the downside risk in the TSX.V is materially less than the other precious metals exchanges.

Today is yet another Friday, and at 3:30 I will be taking the Commitment of Traders Report and, after scanning it once, tossing it directly into the waste bin. From where I sit, the bullion banks have lost control of the gold and silver markets, and while I have to be cognizant of their power and influence, the sheer volume of the recent 14-week advance off those cataclysmic lows of Jan. 19 has set a new paradigm for analysis in this space. Now, could this be a final capitulation by someone who has called for a "near-term correction into June," thus setting himself up for the ultimate reversal? Well, perhaps, but what I DO know is that the move above 210 in the HUI has now vaulted the gold miners into a "blow-off stage" move, and when any market finally goes vertical within the ascending parabola, you just KNOW that while the terminus is close, the price cannot be determined. We could see this blow-off take the HUI to 300 next week, before things cool off. As an investor, I had hoped for a pullback rather than this wondrous excuse for a Saturn rocket, because the technical picture would have been better-footed, but I am sure as hell not standing in the path of this gilded Mack truck barreling down the road with its glittering cargo of attention-starved mining stocks any time soon.

Since the market has spoken, be glad you stayed long and join me in celebrating the elimination of Alpo as a food source.

Disclosure:
1) The following companies mentioned in the interview are sponsors/billboard advertisers/special situations clients of Streetwise Reports: None. The companies mentioned in this interview were not involved in any aspect of the interview preparation or post-interview editing so the expert could speak independently about the sector. Streetwise Reports does not accept stock in exchange for its services. The information provided above is for informational purposes only and is not a recommendation to buy or sell any security.

3) Interviews are edited for clarity. Streetwise Reports does not make editorial comments or change experts' statements without their consent.

4) The interview does not constitute investment advice. Each reader is encouraged to consult with his or her individual financial professional and any action a reader takes as a result of information presented here is his or her own responsibility. By opening this page, each reader accepts and agrees to Streetwise Reports' terms of use and full legal disclaimer.