CVS Health Corporation (NYSE:CVS) had recently capped off a fantastic 2015 performance in several metrics (EPS growth, revenue, dividends, share buybacks and acquisitions) that drive shareholder value. I posted that CVS presented a compelling investment opportunity in the healthcare space. This premise was based on the fact that CVS has been highly acquisitive, continues to deliver robust growth, growing its dividends over time and has an aggressive share buyback program. CVS recently reported a record year in 2015 and continues to drive and position itself for long-term success. With its recent acquisitions and partnerships, specifically, the acquisition Target’s pharmacies and Omnicare will significantly expand its footprint and ability to dispense prescriptions to the general public and in assisted living and long-term care facilities that serve the senior patient population. As the United States continues to absorb an aging population alongside growing overall healthcare costs, more specifically prescription drug costs, CVS looks poised to benefit and continue to outperform the broader market. 2015 was a record year for CVS and with a 21% boost in its dividend payout only underscores this premise. The release of its Q1 2016 earnings reiterates this premise and this company is maintaining its growth story. I content that CVS will continue to deliver sustained growth and position itself for long-term success to drive shareholder value.

CVS reported strong earnings for Q4 2015 and year-end results. Net revenue increased 10% to $153.3 billion while adjusted EPS increased to $5.16 or 14.8% as compared to the prior year. CVS also offered 2016 guidance of robust EPS growth of 11% to 14% or $5.73 to $5.88 and revenue growth of 17%-18.5%. At current levels (~$105), CVS boasts a P/E of ~23 and given its growth rate, acquisitions, partnerships, aggressive stock repurchase program and dividends I believe this company is undervalued. During 2015, CVS announced that it would boost its dividend by 21% and reiterated its five-year long-term financial targets. Capital returns in the form of share repurchases will likely reach the $4 billion mark during 2016, and the dividend will increase by 21% to $1.70 per year starting this year. CVS repurchased 48 million shares while returning $6.6 billion to shareholders in 2015 and is expected to return $5 billion in 2016. It is noteworthy to point out that this is the thirteenth consecutive year that CVS has increased its dividend payout. In 2015, CVS generated $6.5 billion in free cash flow which exceeded the high end of its guidance (Figure 1).

Moving forward to Q1 2016 results, comparing Q1 2015 to Q1 2016, net revenues increased 18.9% to $43.2 billion, and operating profit increased 2.0% to $2.2 billion. Adjusted EPS increased 4.0% to $1.18 and generated free cash flow of $1.8 billion and cash flow from operations of $2.4 billion. CVS confirmed full year Adjusted EPS of $5.73 to $5.88. CVS provided second quarter adjusted EPS guidance of $1.28 to $1.31 and confirmed full-year free cash flow of $5.3 to $5.6 billion. The Omnicare and Target acquisitions are beginning to come to fruition per CVS. Revenues in the Retail and Long Term Care (LTC) segment increased 18.6%, or $3.2 billion, to $20.1 billion, primarily driven by the addition of the LTC operations via the acquisition of Omnicare, addition of the pharmacies and clinics from the Target acquisition and pharmacy same store sales growth (Figure 2). 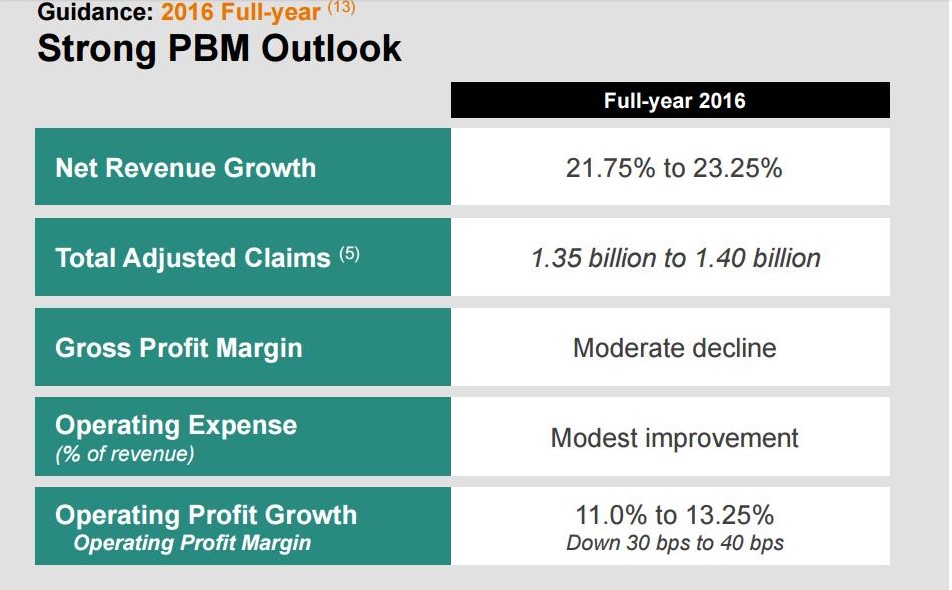 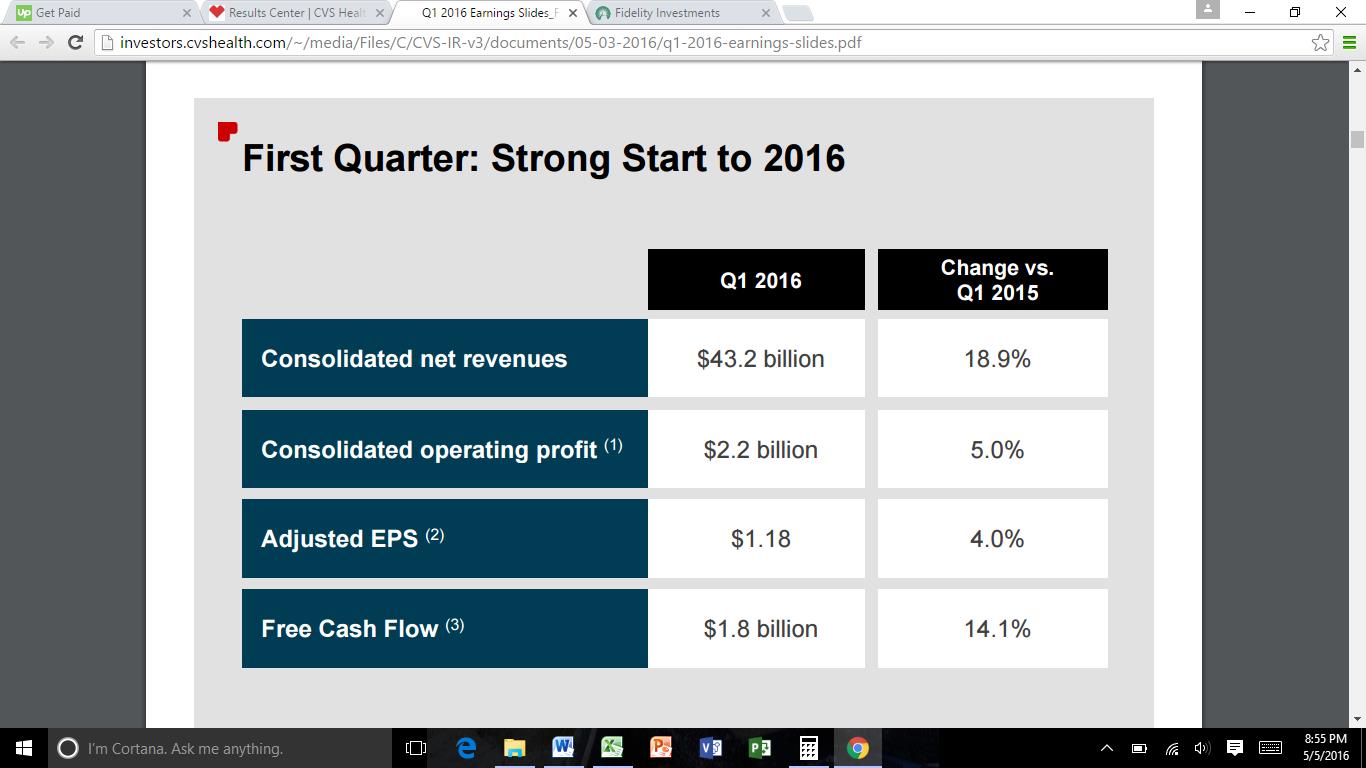 CVS acquired Omnicare for $13 billion in August of 2015 and acquired all of Target’s pharmacies for $1.9 billion in December of 2015. These two acquisitions are now becoming fully integrated and will continue to boost both top and bottom line revenues while geographically expanding its footprint across the US particularly in the Pacific Northwest via the Target acquisition where CVS has limited operations. The Omnicare acquisition has significantly expanded its ability to dispense prescriptions in assisted living and long-term care facilities that serve the senior patient population. CVS will also expand its presence in the rapidly growing specialty pharmacy business. In terms of specialty pharmacy, this business increased 31% in 2014 and is expected to grow to 44% of total drug spending by 2017. Omnicare’s complementary specialty pharmacy platform and clinical expertise will augment CVS Health’s capabilities and enable CVS Health to continue to provide innovative and cost-effective solutions to patients. CVS Health expects to achieve significant purchasing and revenue synergies as well as operating efficiencies from this combination. The Q1 2016 results are encouraging as one part of the majority of the increased revenue came as a direct result of this acquisition.

Per CVS, the Omnicare business is performing well and in line with expectations thus far, and multiple opportunities exist to drive enterprise value. CVS expects to complete the majority of Omnicare integration activities by year end of 2015. Throughout the first half of 2016, they expect to achieve benefits of purchasing synergies.

Opportunities to drive long-term revenue synergies focused on transition of care and care coordination offering for acute care in the home setting enabling CVS to capture a portion of the 2 million patients discharged from skilled nursing facilities annually. CVS should begin to realize revenue synergies in 2H16 and growing thereafter.

CVS has also partnered with three telehealth companies – American Well, Doctor On Demand and Teladoc to explore how direct-to-consumer telehealth providers, retail pharmacy, and retail clinic providers can collaborate to improve patient care. Taken together, CVS is growing its business organically and via strategic acquisitions and partnerships to drive shareholder value and growth now and into the future. The two key acquisitions are well underway and should bear fruit into 2016. 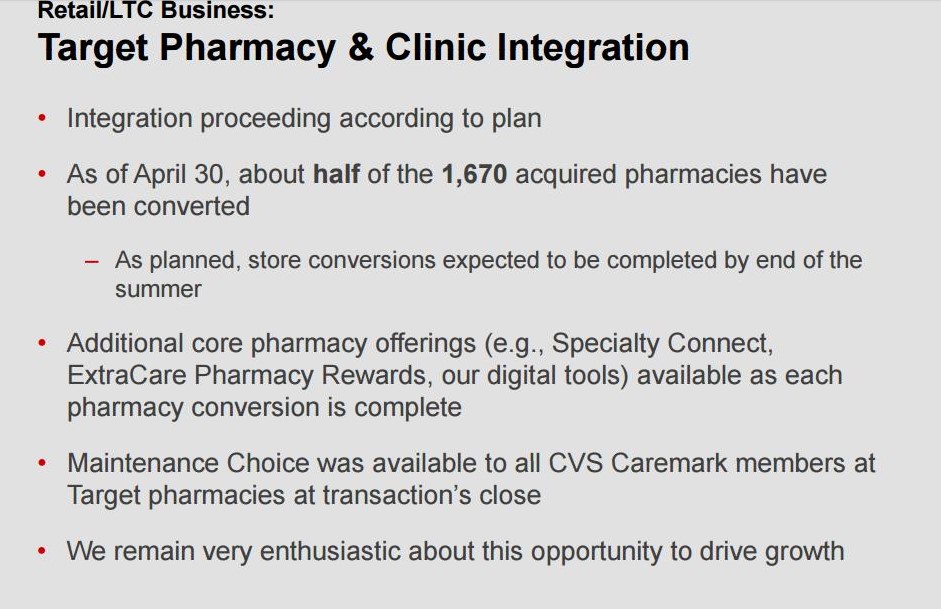 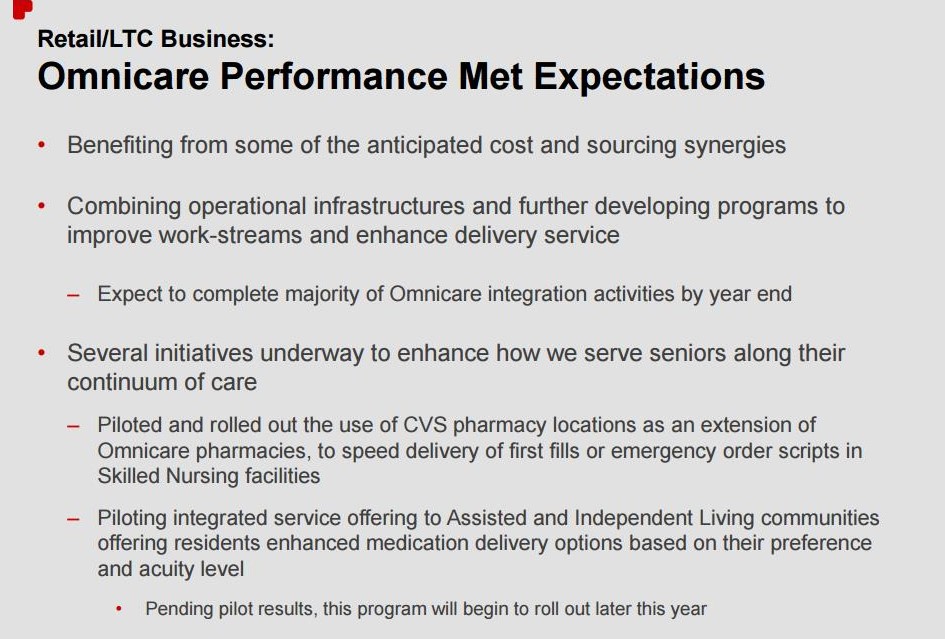 In addition to growing revenues and profits, CVS offers a backdrop of dividend payouts along with a share repurchase program. CVS has increased its quarterly dividend payout by over 1,000% over the past 10 years from $0.04 to $0.42 per quarter. With the newly approved 21% boost in its dividend, beginning in 2016 CVS will have a quarterly payout of $0.4235. This translates into a 1.6% yield based on its current price.

Due to the Target pharmacies purchase, CVS Health reduced its share repurchase guidance for 2015 by $1 billion, from $6 billion to $5 billion. Despite the decrease, the $5 billion earmarked for share repurchases still accounted for more than 4% of outstanding shares. For 2016, CVS has guided that it aims to deploy $4 billion to repurchase shares. This remains an aggressive buyback program and along with its dividend shareholders are doubly rewarded.

CVS is well-positioned for continued future growth and success in the expanding healthcare space as further supported by its current Q1 2016 quarterly and annual 2015 earnings report. CVS has been highly acquisitive, growing dividends over time and buying back its shares to drive shareholder value. Its major acquisitions and partnerships via Omnicare, Target pharmacies, and Telehealth companies position CVS to continue its strong performance and competitiveness in the marketplace. These acquisitions are well under way of being fully integrated under the CVS umbrella and will likely make a meaningful impact on revenue and EPS throughout 2016. The company does not shy away from deploying capital to acquire other assets to drive growth into the future. In addition to their acquisitive mindset, CVS also offers the backdrop of dividends and share repurchases to add value to shareholders. CVS appears to be undervalued based on its growth and future earnings as measured by its P/E and PEG ratios. Considering the most recent quarterly and annual earnings report, CVS may be a great holding for any long-term investor.