Hello MarketClub members everywhere! The votes are counted and almost everyone got this one wrong, including the British betting shops. It's official - England is leaving the EU after 43 years.

I guess I was in the right camp when I posted this on June 14th.

The early reaction was the British Pound falling to its lowest levels since 1985 and stock markets around the world crashing. The one bright spot was the rush into gold which once again shot up over the $1300 level and seems poised to move to the $1400 level. 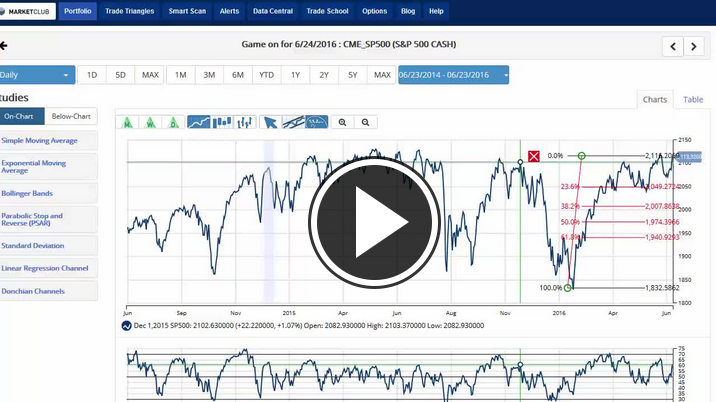 Indices: Looking at the major indices here in the U.S. this morning they are all going to be sharply lower and under pressure.

DOW (INDEX:DJI): The Trade Triangles have been neutral on this market and are presently on the sidelines. Key levels to watch today: A move below 17331 sets this index up to move down to some key Fibonacci levels. A 50% Fib retracement is 16822 and a 61.8 Fib retracement is 16500. These two areas should offer some form of natural support. The really big level to watch in June is 16545 which would turn the DOW into a bear market if breached.

NASDAQ (NASDAQ:COMP): A move today or next week below 4678 will put this index under pressure and set it up to test the 50% Fibonacci retracement level of 4583. The major level to watch this week is the 4581 level, if breached it would represent a major reversal in the NASDAQ to the downside.

Gold (FOREX:XAUUSDO): Earlier today around 2 AM EDT we saw the first inkling of traders moving into gold. When results came in from Sunderland, a northern industrial part of Great Britain and very close to where I was born and grew up, traders started buying gold. The feedback from Sunderland was the first clue that the mood of the country was for a change. Most of the London crowd had completely misread the mood of the country, sorta of reminds you of Washington D.C., doesn't it?

With gold well and truly over the 1300 level this morning you can now set your sights on higher target levels for this precious metal. A 50% Fibonacci retracement pushes gold back up to $1430. A 61.8% Fibonacci retracement takes this market back to $1516. I expect both upside targets hit in the coming months.

Crude Oil (NYMEX:CL.Q16.E): The oil market was not immune to the sharp drop in equity prices around the world today. Fortunately, the Trade Triangles were on the sidelines and managed to avoid today's sharp sell-off. Here are the Fibonacci levels I will be looking for in crude oil: A 50% retracement pushes crude oil back to the $45.31 level. A major Fibonacci retracement of 61.8% pushes crude even further down to $43.78 a barrel.

4 thoughts on “See EU Later - Brexit is for Real”