Hello MarketClub members everywhere. Once again it falls on the shoulders of the Federal Reserve to keep monetary policy loose. With expectations of 4 rate hikes in 2016, we are down to one at this moment in time. I doubt that the Fed has it in them to raise rates again in 2016, which means that 2017 is going to be a reset year for America. Not only are we going to see a new president, but the likely hood is we are going to see a reset of interest rate here in the US. 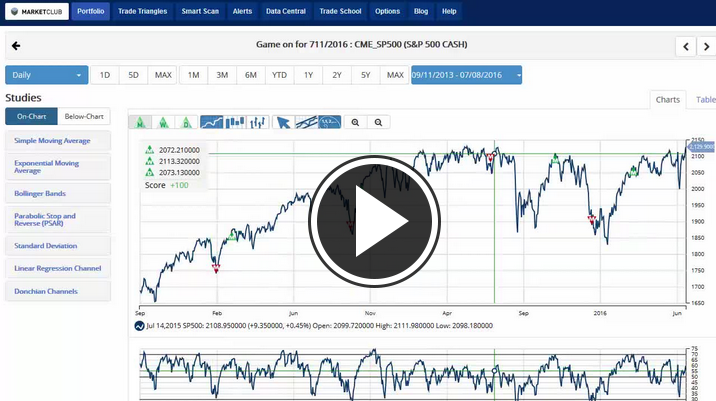 Last week, the surprise was the non-farm payroll figure showing 287,000 jobs created compared to 175,000 forecast. Look for this number to be revised downward in the future. The non-farm payroll figure was enough to jump start the equity markets pushing the S&P 500 (CME:SP500) to close within a point lower than its best ever close on May 21st, 2015 at 2,130.82. The DOW (INDEX:DJI) followed but was unable to overcome its highs at 18,351.36 on May 20th, 2015. Both of these indices are now in a positive mode according to the Trade Triangles. The only laggard in the group is the NASDAQ (NASDAQ:COMP) index which has moved into a neutral mode requiring a sideline position.

This week is setting itself up to be a most interesting one as the proximity of the old May highs are the last barrier for stocks moving higher. So fasten your seat belts it is going to be an interesting ride.

The big question is, can cheap money continue to drive stocks higher? Maybe the only person who can answer that question is Janet Yellen, the chairperson of the Federal Reserve board. As you know, I have not been a big fan of the Federal Reserve policy, as I believe that the FED has been in deep water without a life preserver for quite some time. Like many big institutions they are just hoping and praying something comes along to save their hides. The odds are it will be inflation, that seems like the only way we can get out of this mess that the FED put the country in. Stocks, on the other hand, have benefited greatly from the cheap money that the FED has been throwing around for the last seven years.

A good inflation indicator is gold (FOREX:XAUUSDO) which has been moving steadily higher for most of the year. Gold continues to be in a positive mode with targets in the intermediate term of $1390-$1400. Long-term I see gold moving significantly higher.

The crude oil (NYMEX:CL.Q16.E) market which I predicted would move lower has moved into my Fibonacci support zone. The 50% retracement level is $45.08, the next major 61.8% retracement level would take oil down to $43.51. While the trend according to the Trade Triangles is down at the moment, I continue to think that these Fibonacci levels will begin to act as support for crude oil. I would not, however, try to pick a bottom at this point but rather wait for the Trade Triangles to turn and indicate that the market has made a low and is headed higher again.

In today's video we will be catching up on all these markets and sharing with you are very latest thoughts. Thank you for watching.

2 thoughts on “Can Cheap Money Continue To Drive The Market?”