Hello MarketClub members everywhere. I thought this would be a good time to review the events of the last seven trading days. First, we had Great Britain’s historic exit from the EU on July 23rd which immediately sent the markets of the world into a chaotic downward spiral with the DOW (INDEX:DJI) losing over 5% in just over 48 hours! After hitting a low of 17,063, the DOW abruptly reversed course in what I mistakenly labeled a “Dead cat bounce”. It was more like “Who let the cat out of the bag” as the markets proceeded to go up just as fast as they went down catching many traders on the wrong side of the market. 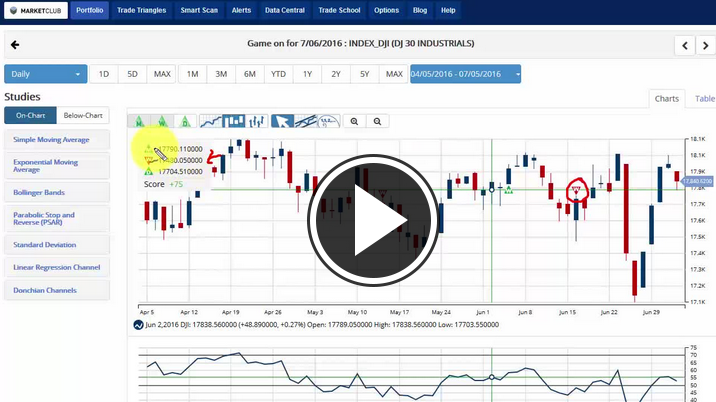 If you follow the Trade Triangles and I hope you do, you know that they were on the sidelines during this epic battle between the bulls and the bears where both sides were badly mauled and bruised. Having a position on the sidelines is a position - make no mistake about it. It's just as important as being long or short the market. If the market is undecided as to which direction it is headed why take a position in the market. Isn't it best just to stay on the sidelines until a trend develops that you can latch onto and make some big profits?

My answer is YES - because it makes sense to do so.

After America's big holiday on July 4th, traders came back to a more realistic market one that had recalibrated world events. The mood, however, was entirely somber on Tuesday as selling pressure immediately came into the indices pushing them lower and smart money moved into the gold market sending it higher.

There appears to be a great deal of uncertainty still surrounding the equity markets and the low, and low-interest rates that the Federal Reserve has been employing to help stimulate growth. Unfortunately, the Fed is in deep water and has been for quite some time and has no concrete idea of how to get out of this mess that they helped create. It is hard to imagine interest rates going much lower; it is also hard to imagine interest rates going higher given the lack of growth both here in the US and the rest of the world.

Bottom line it is a mess.

In today's video I will be looking closely at all of the major indices and telling you what I think is going to happen in those markets. Of particular interest, this short trading week is how we close this Friday. Many professional traders will have the eyes glued to see how the major markets close this Friday.

Yesterday I talked about the gold (NYMEX:GC.Q16.E) train and this morning I see that gold is trading well above the $1370 level. My immediate target for gold is between 1395 and $1400 an ounce.

Crude oil (NYMEX:CL.Q16.E) has fallen back to an area of good support and remains in a somewhat negative mode based on the Trade Triangles.

One thought on “This Is A Short But Important Trading Week”