CVS Health Corporation (NYSE:CVS) recently announced fantastic Q2 2016 numbers across the board. Increased EPS growth, revenue and free cash flow coupled with dividends and share buybacks bode well for CVS investors. CVS’s acquisitions of Target pharmacies and Omnicare are becoming fully integrated under the CVS umbrella. Collectively, these are great attributes that drive shareholder value over the long-term. I’ve written several articles presenting a compelling investment opportunity in the growing healthcare space via CVS. My investment thesis is based on the fact that CVS has been highly acquisitive, continues to deliver robust earnings growth, revenue growth, growing dividends and has an aggressive share buyback program in place. CVS recently reported fantastic quarterly results for Q2 2016 in 2016, positioning itself for long-term success. With its recent acquisitions of Target’s pharmacies and Omnicare, these proactive measures will significantly expand its presence and ability to dispense prescriptions to the general public and in long-term care facilities. As healthcare costs continue to rise (specifically prescription drug costs) and the population continues to age with the elderly comprising a larger segment of the overall population, CVS looks poised to benefit. The release of its Q2 2016 earnings reiterates this premise while the company is maintaining its growth narrative. I content that CVS will continue to deliver sustained growth and position itself for long-term success to drive shareholder value.

CVS reported robust earnings for Q2 2016 and the stock immediately responded in a meaningful way, popping over $5 per share or >5%. At current levels (~$97), CVS boasts a P/E of ~22 and given its growth rate, acquisitions, partnerships, aggressive stock repurchase program and dividends I believe this company is undervalued. During 2015, CVS announced that it would boost its dividend by 21% and reiterated its five-year long-term financial targets. It is noteworthy to point out that this is the thirteenth consecutive year that CVS has increased its dividend payout. 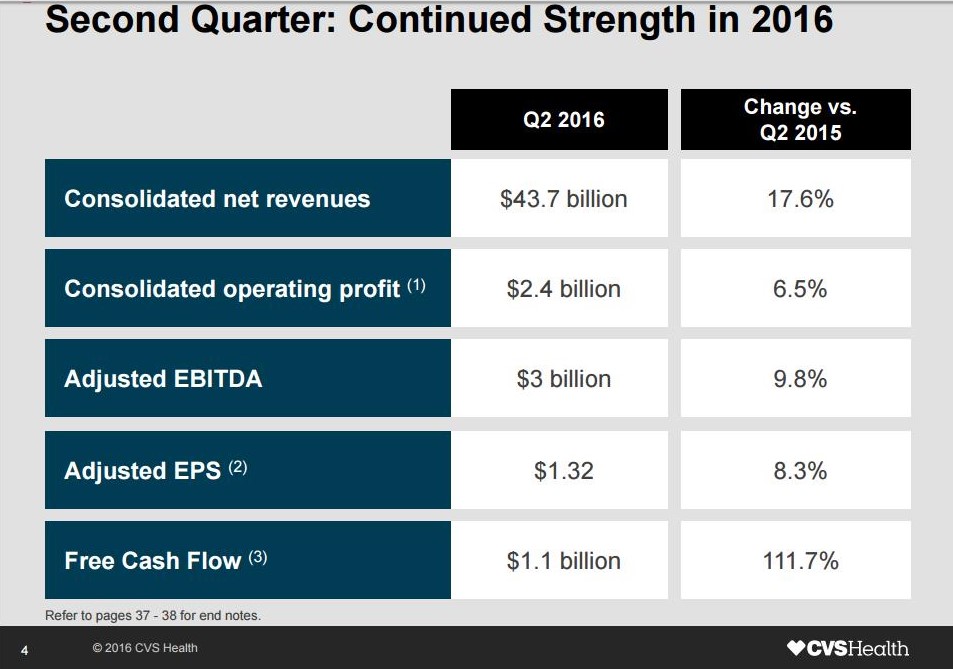 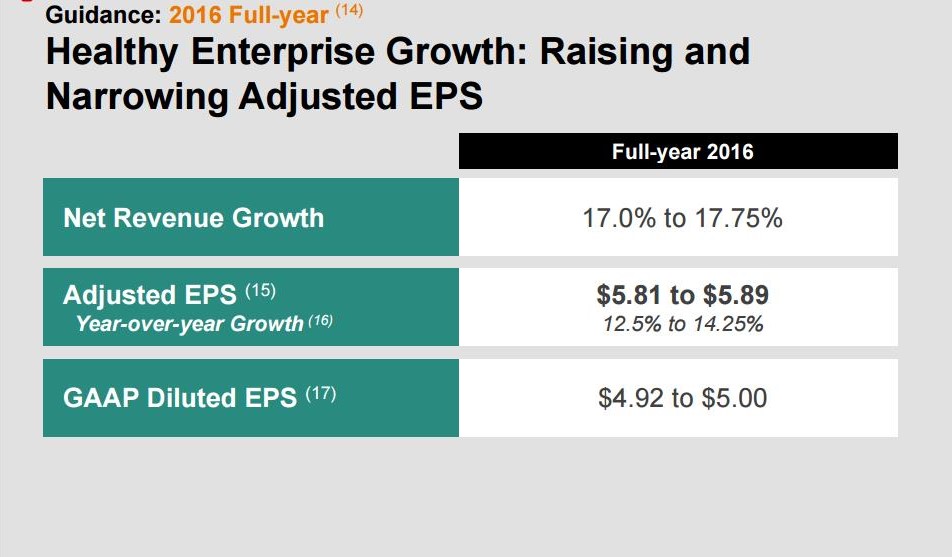 The Omnicare and Target acquisitions - Integration

CVS acquired both Omnicare and all of Target’s pharmacies in 2015 to drive future growth and revenue. These two acquisitions are now becoming fully integrated and will continue to boost both top and bottom line revenues. These acquisitions will geographically expand CVS’s presence across the US where CVS had limited operations prior. The Omnicare acquisition has significantly expanded its ability to dispense prescriptions in assisted living and long-term care facilities that serve the senior patient population. The Omnicare asset has allowed CVS to expand its presence in the rapidly growing specialty pharmacy business. There’s tremendous growth in the specialty pharmacy space. This space saw business increase 31% in 2014 and is expected to grow to 44% of total drug spending by 2017. The Q2 2016 results are encouraging as a significant increase in revenue came as a direct result of this acquisition and was specifically broken out as a main contributor in the respective segments.

CVS stated that the integration of Target’s 1,660 pharmacies and 79 clinics across 47 states are completed ahead of schedule (Figure 3). CVS plans to operate 1,500 clinics by 2017 and plans to develop five to ten small, flexible format stores over a two‐year period is planned. These will be branded as TargetExpress and include a CVS/pharmacy. There will be additional core pharmacy offerings available as each pharmacy conversion is complete. CVS is focusing on converting Target guests who don’t currently use the pharmacy. 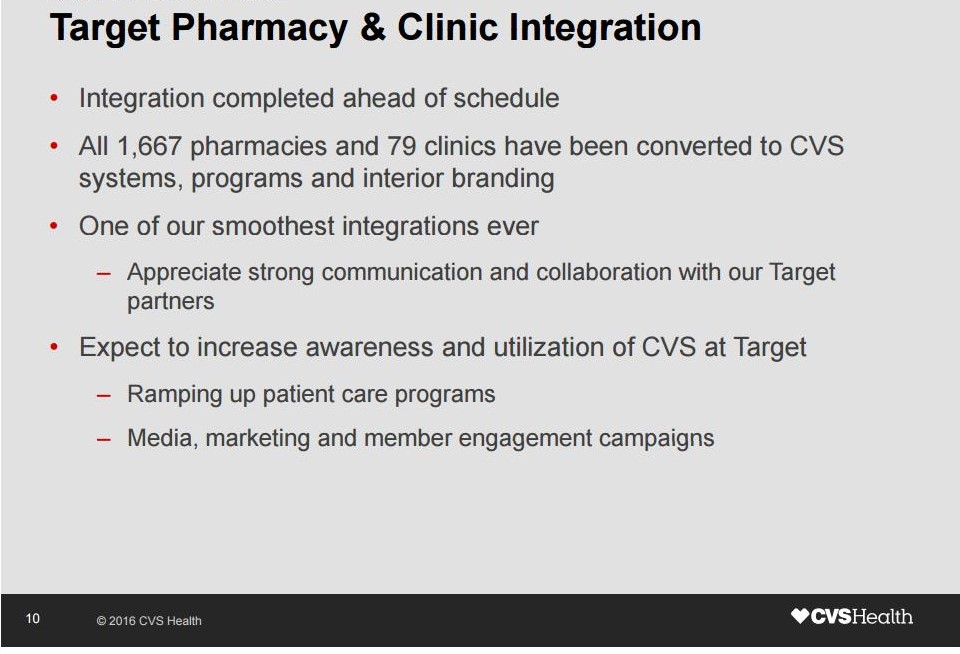 Tailwinds for the second half of 2016?

Fundamentally, opportunities to drive long-term revenue synergies are firmly in place. Synergies focused on the transition of care and care coordination offerings for acute care in the home setting enables CVS to capture a portion of the 2 million patients discharged from skilled nursing facilities annually. CVS should begin to realize revenue synergies in 2H16 and growing thereafter. This was driven by the Omnicare acquisition and should continue to drive growth into the future. CVS has also partnered with three telehealth companies – American Well, Doctor On Demand and Teladoc to explore how direct-to-consumer telehealth providers, retail pharmacy and retail clinic providers can collaborate to improve patient care. Taken together, CVS is growing its business organically and via strategic acquisitions and partnerships to drive shareholder value and growth now and into the future. The two key acquisitions are well underway and should bear fruit into 2016. The introduction of generics, Med D, tax benefits and other factors detailed in Figure 4 are expected to accentuate second half 2016 strength. 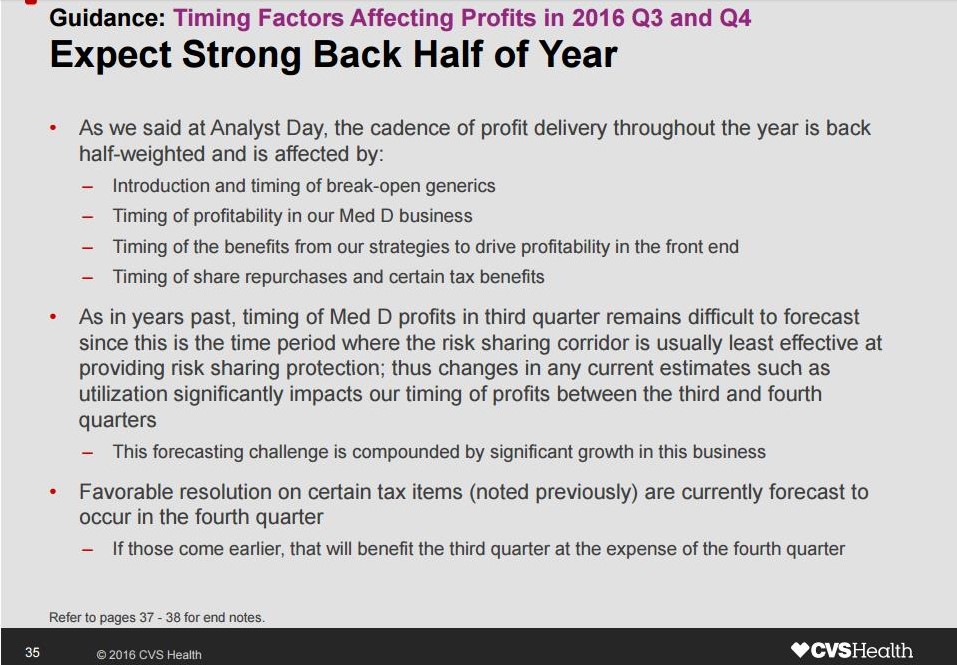 In addition to growing revenues and profits, CVS offers a backdrop of dividends along with a share repurchase program. CVS now pays out a quarterly dividend of $0.4235 which translates into a 1.75% yield based on its current price. For 2016, CVS has guided that it aimed to deploy $4 billion to repurchase shares. CVS stated that the $4 billion earmarked for share repurchases has been essentially completed (Figure 5). Collectively, CVS’s buybacks and dividend payouts doubly reward shareholders. In Q2 2016, $2.4 billion was returned to shareholders and $4.9 billion year-to-date (Figure 5). 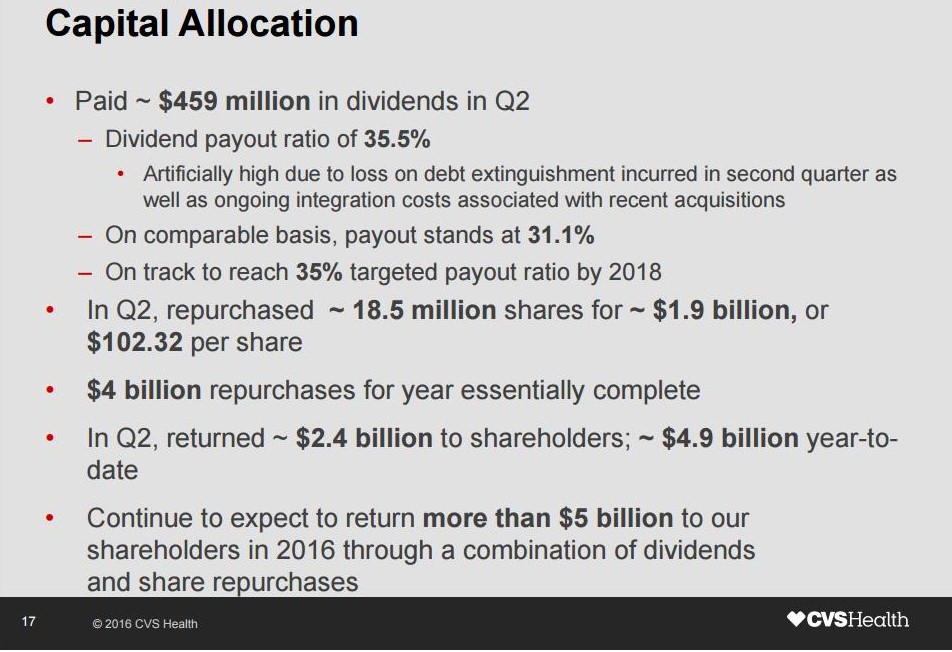 CVS is well-positioned for continued future growth and success in the expanding healthcare space as further supported by its current Q2 2016 quarterly earnings report. CVS has been highly acquisitive, growing dividends over time and buying back its shares to drive shareholder value. Its major acquisitions and partnerships via Omnicare, Target pharmacies, and Telehealth companies position CVS to continue its strong performance and competitiveness in the marketplace. These acquisitions are well under way of being fully integrated under the CVS umbrella and will likely make a meaningful impact on revenue and EPS in the back half of 2016. In addition to their acquisitive mindset, CVS also offers the backdrop of dividends and share repurchases to add value to shareholders. Considering the most recent quarterly earnings and history of growth, CVS may be a great holding for any long-term investor.

Disclosure:The author currently holds shares of CVS and the author is long CVS. The author has no business relationship with any companies mentioned in this article. He is not a professional financial advisor or tax professional. This article reflects his own opinions. This article is not intended to be a recommendation to buy or sell any stock or ETF mentioned. Kiedrowski is an individual investor who analyzes investment strategies and disseminates analyses. Kiedrowski encourages all investors to conduct their own research and due diligence prior to investing. Please feel free to comment and provide feedback, the author values all responses.