And the message is "You never sell a quiet market". That is one of those old market adages that has been around forever and for a reason. We'll see what that reason is after Labor day.

The dog days of summer are dragging on as we come to the final five trading days of August. Besides the Italian earthquake a real tragedy, not a lot happened overnight in the markets. This brings me back to quiet markets which we now have, and it appears that they are just biding their time before something happens to get them moving again. 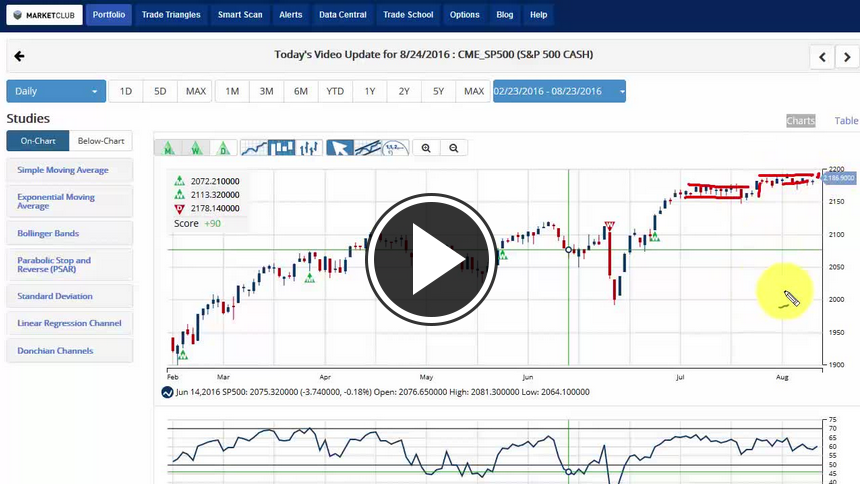 Indices: All three of the major indices have all of their Trade Triangles in a positive green mode indicating that a strong trend is still in place for each index. Even though each of these indices has been quiet, it does not change their positive long-term trend. I continue to see this group of markets moving higher.

Gold (FOREX:XAUUSDO): At the moment the gold market presents an interesting picture. If one looks at the monthly and weekly Trade Triangles both of those are green and in a positive mode. It is only the daily Trade Triangle which we use for timing that is red indicating that the very short-term trend is negative. That could change as early as today if spot gold moves over $1344.50. The other positive for gold is the fact that the RSI line is still about 50 indicating that the trend is positive. At the moment I am on the sidelines based on the Trade Triangles for short-term traders. However, I will be watching the level I mentioned above for a possible short term trend reversal back to the upside.

Crude Oil (NYMEX:CL.V16.E): Oil has made a remarkable recovery back to almost $50 after getting beat down pretty badly in July before pulling back in the last few days. With the red daily Trade Triangle, you should be on the sidelines at the moment. After trading over the $90 level, last July crude oil came under some relentless selling pressure before bottoming out around the $35 level in early January of this year. Based on that market action you can now draw a trendline on the chart from last July's high to the highs seen in June (2016) around the $51 area. This is an important trendline, and I will illustrate its importance in today's video.

In today's video update I will be looking at all of these markets and analyzing areas of interest and concerns.

One thought on “Quiet Markets Come With A Message”