The political lines have been drawn, it’s Clinton verses Trump. I written several pieces evaluating the massive sell-offs in the biotech sector. Utilizing the iShares Nasdaq Biotechnology ETF (NASDAQ:IBB) as a proxy, I proposed a loose correlation between opportunistic political posturing by political front-runners and the chronic price suppression of IBB. I content that political posturing played a significant role in the sell-off of the healthcare cohort and more specifically biotech stocks. Drug pricing was used as a centerpiece as the scapegoat for political gains. Throughout this political process, this rhetoric has negatively impacted the sector. IBB fell from $401 in July of 2015 to $240 in February of 2016 or alternatively a 40% hit. This sell-off coincided with political rhetoric aimed at the collective cohort of healthcare and biotech companies. I strongly felt that these events were seasonal and would eventually subside without any significant impact to the underlying stocks within IBB. I felt this political induced sell-off presented a great buying opportunity after the 40% decline. I put my money where my mouth was by purchasing two tranches of IBB at a strike price of $250 in February and June during the market-wide sell-off and the Brexit, respectively. I feel that this is great entry point for any long-term investor that desires exposure to the biotechnology sector.

Are Drug Prices Really The Culprit?

In terms of the overall cost to the healthcare system, drugs comprise less than 10% of the pie. Allergan CEO Brent Saunders stated in an interview with Jim Cramer on Mad Money (Figure 1):

"I think going after an industry that comprises less than ten-percent of the total cost of healthcare, drug price increases are highly negotiated, drugs do save the system money", "going after the ten-percent that does so much good for society is really just rhetoric." - Brent Saunders, CEO Allergan

As candidates threaten drug companies with containing the costs of drugs via price increase caps or profit caps or a variety of other creative mechanisms, these actions negatively impact healthcare and biotech stocks in particular. Going after the 10% of the pie mathematically doesn’t make much sense to me. Even if the government was to cut drug prices by 10%, this would render a mere 1% decrease in the overall cost of healthcare. I think the 90% of the pie should be the focus here as there’s much more opportunity to streamline and implement efficiencies across the board to save the system money. 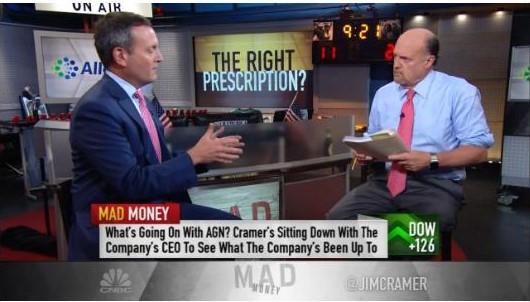 What Happened To All The Political Rhetoric?

The mere absence of political headwinds and removal of the uncertainty surrounding the presidential nominees has served as a catalyst for the entire sector to move higher. The downturn in IBB can be somewhat attributable to the political posturing by the pool of presidential candidates. Specifically, Hillary Clinton and to a lesser extent Donald Trump have used the drug pricing issue for political gains. The drug pricing was thrusted into the spotlight as a result of the Turing Pharmaceuticals debacle. Its former CEO Martin Shkreli was summoned before Congress and faced sharp criticism and social media backlash after he increased the price of its drug Daraprim from $13.50 to $750 per pill. The Democratic presidential nominee Hillary Clinton rightly denounced these actions (Figure 2). The Daraprim situation is water under the bridge and is largely deemed an isolated and egregious price-gouging incident.

"The company is called Valeant Pharmaceuticals," "I'm going after them. This is predatory pricing, and we're going to make sure it is stopped."

This price gouging incident has rightly generated widespread backlash. This targeted criticism has been unfairly applied across the entire biotech cohort. Although there are definitely isolated examples of price gouging, at the end of the day, these companies are in business to make a profit, retain fiduciary responsibilities, return value to shareholders, continue to drive innovation and, most of all, provide a higher quality of life for patients suffering from debilitating diseases. The rise in healthcare costs is attributable to many other factors not isolated to the pricing of drugs. Attempts to heavily regulate the sector with government intervention will likely end in a futile attempt in arresting drug price increases as the political landscape matures.

While drug prices continue to rise, there's substantive rationale in the form of input costs, loss of exclusivity, curative treatments, an increase in quality of life and removal of some patients from the overall healthcare system, thus reducing the overall cost burden to the healthcare system. Regulation would negate efforts set forth by the Orphan Drug Act, accelerated approval programs, the FDA Modernization Act and the Fast Track drug approval program. I personally feel that these attempts by lawmakers will end in a futile endeavor.

As the political continues to mature and the price gouging rhetoric falls in the rearview, this group will likely move higher as a result. IBB has made several attempts in moving off its lows in a meaningful way from the $240 level throughout 2016 and now appears to be close to breaking through the $300 threshold (Figure 3). 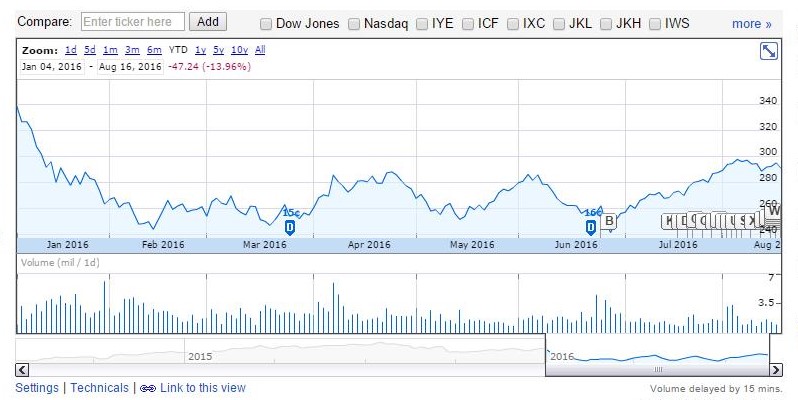 I contend that despite the negative political backlash garnered throughout this political cycle on both sides of the aisle, IBB has a great track record as a true secular growth story. Considering IBB is top heavy in mature profitable biotech names with low P/E ratios, it looks poised to break out into the mid-$300 range over the next year. IBB may serve as a great satellite holding for any long portfolio desiring exposure to the biotechnology sector with a long-term time horizon.

2 thoughts on “The Presidential Nominees Are Set”