The Walt Disney Company (NYSE:DIS) can’t seem to get out of its own way when it comes to breaking out of this chronic stock slump after moving from the $120s in late 2015 to being stuck in the $90 range all throughout 2016. This perpetual slump is almost entirely attributable to the decrease in ESPN subscribers and thus revenue and profit from their Media Networks segment. Excluding ESPN, Disney has been executing well and reporting record numbers throughout its other business segments. Disney has a deep and diversified enough entertainment portfolio to make a compelling case that these ESPN fears are overblown. Disney’s portfolio consists of Marvel Entertainment, Lucasfilm, Pixar, ESPN, ABC, a 32% shareholder in Hulu and of course the core Disney franchise (Disney Studios, Disney consumer products, Parks and Resorts and Disney Cruise Line). The revenue stream from these assets is as diverse as the assets themselves. The ESPN franchise within the Media Networks segment generates revenue/operating income that is disproportionate to the amount of the company’s overall revenue and operating profit. Thus, one can see why investors were spooked after two consecutive significant declines in ESPN numbers in Q4 2015 and Q1 2016. The decreases in revenue within this segment have been arrested and on the rebound due to measures put in place at Disney. As this revenue stream slowly recovers and investors can rest assure, Disney will retrace the $120 level. In the meantime all other segments are performing well and coupled with dividends, share buybacks, a P/E ratio of ~17.0 and currently sitting at a 52-week low (excluding the flash crash in February), I’d be a buyer of the stock at these levels.

The company posted Q3 2016 earnings of $1.62 per share on $14.28 billion in revenue. Disney beat on both EPS and revenue which analysts expected $1.61 and $14.15 billion, respectively. Operating income for Disney's studio segment came in at $766 million, also higher than analyst expectations of $720.7 million. Income for the unit benefited from blockbuster films such as Captain America: Civil War and Finding Dory throughout the quarter (Figure 1). Disney’s CEO stated that the company's results "are evidence that our asset mix is strong, as is our ability to execute in ways that enhance the Disney brand and create value for our shareholders while we invest for future growth." Overall this quarter was impressive across all segments, including the Media Networks as losses were arrested and actually saw a modest increase in revenue and operating income. 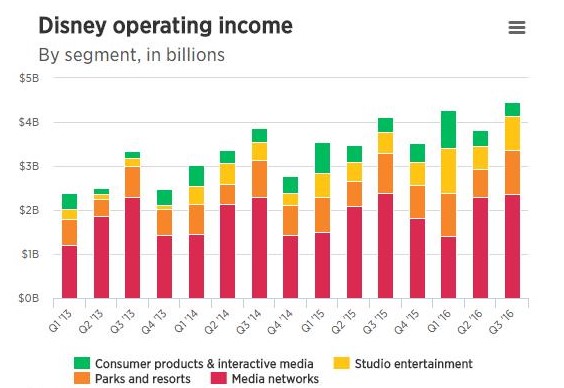 Figure 1 – Historical quarterly operating income broken out into each segment, emphasizing the importance of the Media Networks segment

During the quarterly results, Disney announced that it is buying a 33% stake in BAMTech. This is intended to accelerate growth in direct-to-consumer video streaming. This will be a new ESPN-branded multi-sport direct-to-consumer service. BAMTech will be separated from Major League Baseball's (MLB) digital arm as part of the deal. Disney will pay $1 billion and has an option to acquire majority ownership in the future. Disney said that BAMTech will work with ESPN to launch a direct-to-consumer, subscription streaming service, featuring live sporting events at the regional, national and international levels. BAMTech will launch later this year and feature content already licensed from MLB and NHL. Current content on ESPN's linear networks will not be part of the service. Live TV, especially sports, remains one of the biggest viewership numbers for traditional television. During the quarter, Disney said cable network revenue grew 1 percent to $2.09 billion, partially attributable to growth at ESPN. Disney said that ESPN saw higher advertising revenue, which "included the benefit of an additional NBA championship game." On a whole Media Networks brought in $5.91 billion in revenue which was up 2% year-over-year when compared to the same quarter. In terms of Cable Networks, revenue was up albeit 1% to $4.2 billion and operating income was up 1% to $2.1 billion (Figure 2). The operating income was due to growth in ESPN. ESPN’s decline has ostensibly been arrested over the last two quarters and assuming Disney can reenergize this segment with its ongoing partnerships and efforts, Disney will likely move higher. 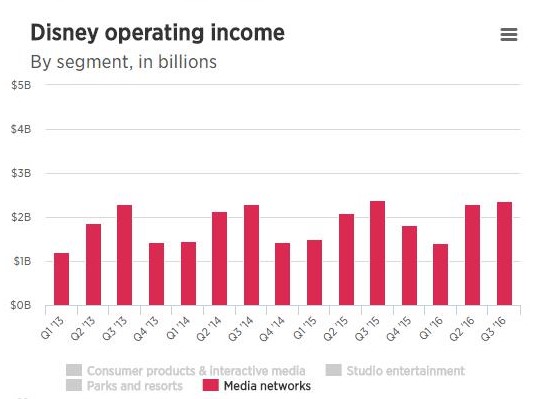 Disney Shanghai opened June 16th and per Disney’s CEO, “a spectacular success by any measure”. More than 1 million people visited the park as of the quarterly earnings call and people are staying longer than expected and the hotel occupancy has been steady at 95%. The CEO went on to add “we built something that was very complex and very large and it opened flawlessly” and “plenty of room for new lands and attractions.” Disney Shanghai will serve as yet another catalyst for Parks and Resorts revenue and profit growth as well as increase its geographic footprint to further penetrate the Chinese market with its other business segments.

Disney has had fantastic studio success as revenues grew 40% to $2.85 billion. As of 2006, 29 films have been released under the Lucsafilm, Marvel, Pixar and Disney Animation. All these films averaged $800 million in worldwide box office receipts. Disney’s CEO mentioned that it’s not limited to the box office but substantial added value across consumer products, TV, Parks and Resorts. The current quarter included films such as Captain America: Civil War, The Jungle Book, Finding Dory and well as continued success of Zootopia. Disney has a big moat when it comes to films and Disney has many sequels that will be spun off from these successful franchises such as Star Wars and Marvel. This segment has a lot of runway based on the multi-year movie lineup slated over the next few years. I’d look for continued success throughout this segment.

The Walt Disney Company (NYSE:DIS) is firing on all cylinders and addressing ESPN subscriber losses via the BAMTech deal and arresting further losses in revenue and income within this segment. Revenue and income were up slightly when comparing year-over-year quarterly results. Disney has seen the Media Networks revenue and income stabilize over the previous two quarters. Disney has a deep and diversified enough entertainment portfolio to make a compelling case that these ESPN fears are overblown even if stagnation is occurring. Disney’s portfolio consists of compelling assets such as Marvel Entertainment, Lucasfilm, Pixar, ESPN, ABC, a 32% shareholder in Hulu and the core Disney franchise (Disney Studios, Disney consumer products, Parks and Resorts and Disney Cruise Line). The opening of Disney Shanghai experienced, “a spectacular success by any measure”. Disney Shanghai will add value and allow Disney to further penetrate the Chinese market. With a P/E ratio of ~17.0 and currently sitting at a 52-week low (excluding the flash crash in February), I’d be a buyer of the stock at these levels ($93-$97). I will personally add to my position if the stock hits the low $90s.

Disclosure: The author holds shares of DIS and is long DIS. The author has no business relationship with any companies mentioned in this article. He is not a professional financial advisor or tax professional. This article reflects his own opinions. This article is not intended to be a recommendation to buy or sell any stock or ETF mentioned. Kiedrowski is an individual investor who analyzes investment strategies and disseminates analyses. Kiedrowski encourages all investors to conduct their own research and due diligence prior to investing. Please feel free to comment and provide feedback, the author values all responses.