McKesson Corporation (NYSE:MCK) recently reported Q2 2017 numbers that missed analysts’ expectations on both EPS and revenue, missing by $0.11 per share and $1.25 billion, respectively. This was the fourth consecutive quarter in which McKesson has missed revenue targets. As a result of the most recent miss, shares of McKesson sank by ~$40 per share or 23% beginning in after-hours trading and through the next trading day (Figure 1). In February I wrote a piece on McKesson stating that I felt McKesson presented a buying opportunity when the stock sank to a 52-week low of $148 per share. As that call began to come to fruition, I wrote a series of follow-up articles voicing caution as the share price appreciated. On March 21st I framed my thesis as being well intact as the shares appreciated to the mid $150s. On May 29th I stated that concerns remained despite the solid Q4 2016 quarterly earnings as shares appreciated to the low $180s. On July 20th I stated that shares had appreciated 34% by reaching the ~$200 level and at that point, I was hesitant due to pressures regarding the pharmaceutical supply chain and earnings from other pharmaceutical wholesalers such as Cardinal Health. At the writing of the July 20th article, I had relinquished my position in McKesson due to the run-up in share price and the growing concerns of the business model in combination with social and political pressures. 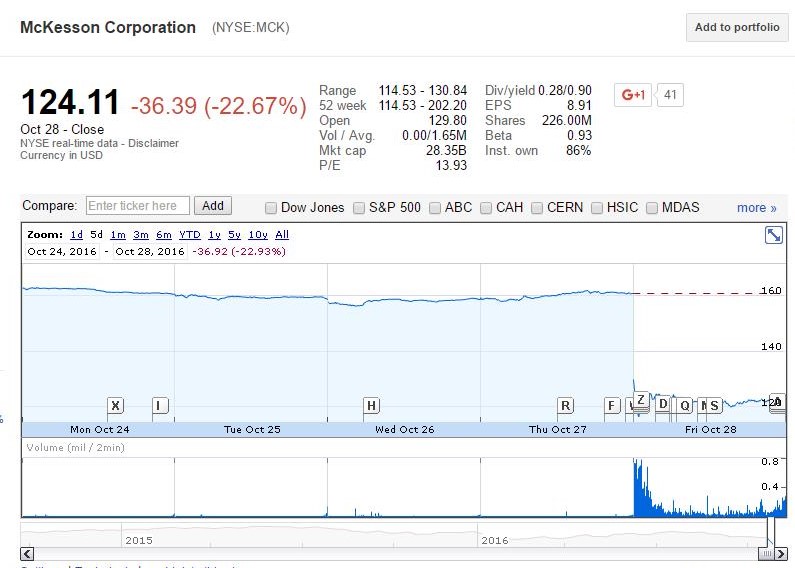 The Recommendation To Buy McKesson At Its 52-week Lows

McKesson had been faced with an increasingly challenging healthcare landscape as political posturing, drug pricing scrutiny, overall sentiment towards pharmaceutical companies due to price gouging allegations and the overall rotation out of healthcare related stocks. I felt this confluence of events unfairly plagued McKesson’s stock, falling from $241 to $148 or 39% in just 9 months through February 2016. McKesson appeared very attractive considering its EPS growth, dividend payout, acquisitive mindset and share buyback program however concerns remained. Despite these concerns EPS and revenue were still strong and I felt the sell-off was unjustified. Looking at the most recent quarterly numbers (at the time in February), sustained growth was intact. McKesson had reported results for Q4 2016 and revenues for the quarter were up 4%. For the 2016 fiscal year, McKesson had revenues of that were up 7%. Full-year adjusted earnings per diluted share were up 9% compared to the prior year. After that recommendation, the stock had appreciated from the ~$150 level to the ~$200 level or ~34%. After this run-up in the share price and the red flags that I outlined leading up to this appreciation (outlined below), I stated that I sold my position in McKesson.

My number one concern regarding McKesson was drug pricing concerns with the negative social and political backdrop. McKesson along with other pharmaceutical distribution companies such as Cardinal Health and AmerisourceBergen have been under tremendous pressure as of late due to political pressures regarding the pharmaceutical supply chain and drug pricing concerns. I recently wrote an article “McKesson Jumps 34% Off Lows – Now What” stating that the easy money had been made from the ~$150 level to the roughly ~$200 level. I also pointed out that greater than 98% of McKesson’s revenues come from pharmaceutical distribution and services domestically and abroad. Thus any impact to this business model will likely have direct negative implications with regard to revenues and EPS. At the closing of that article I stated that currently, McKesson’s P/E ratio sits at the top of its peer cohort and considering the stock has risen over 34% along with the potential erosion of the middle model, I’d be cautious buying at these levels despite additional upside based on its 52-week high of $240. Since any disruption in this business model will negatively impact McKesson disproportionally compared to the insurance, pharmacy and pharmacy benefit manager (PBM) companies, I’d avoid McKesson especially after the ~34% move to the upside.

Is The Model Shifting Away From The Distribution Side? – Red Flag #2

My second red flag that I wrote about was my growing concerns about the middleman in the pharmaceutical drug supply chain. This is the bread and butter of many companies in this space, notably McKesson, Cardinal Health, and AmerisourceBergen. Cardinal Health’s past earnings report spooked investors as they lowered their full-year guidance. There’s evidence that suggests the middleman model is slowly shifting away from the traditional means of delivering drugs to hospitals and pharmacies. More often than ever hospitals and pharmacies are establishing direct relationships with manufacturers thus buying direct. Manufacturers have increased their use of direct accounts when shortages arise thus disrupting the traditional distribution model long dominated by companies such as AmerisourceBergen, Cardinal Health, and McKesson. Some drug makers will intermittently pull their products from distributors when manufacturing issues strain their supply. This action hits distributors particularly hard since they make their money by moving product within the supply chain. Drug distribution companies such as McKesson can continue to add value via consulting, analytics and knowledge surrounding providers’ purchasing habits however 98% of its revenue in this the distribution space.

I don’t think we’ll know the impact of this shift for some time however I think we’re starting to witness some of this rotation. This was particularly concerning considering McKesson had laid off 1,600 workers throughout the company. This move could be unrelated to the middleman business and more attributable to customer base losses. The company determined “reductions in our workforce would be necessary to align our cost structure with our business model.” Greater than 98% of McKesson’s revenues come from pharmaceutical distribution & services domestically and abroad. Any impact to this business model will likely have direct negative implications with regard to revenues and EPS.

The Accumulation Of Red Flags Precipitate

The results of the most recent quarter saw the precipitation of all the red flags that I outlined leading up to the $200 level. As a result of these red flags, I relinquished my position near the $180 level as a result of losing any confidence in the business model under the current climate. There’s been a long and sustained backlash against drug prices, drug manufacturers, and wholesalers. McKesson, the largest wholesale drug distributors, lost a quarter of its market value after disclosing that competition and a slowdown in price inflation for brand-name drugs would reduce its profits for its current fiscal year. McKesson said it has been forced to lower the prices it charges to independently owned pharmacies to match the prices charged by competing wholesalers looking to gain market share. “We have made a very significant change in our pricing practice to match where the market is today,” McKesson CEO. McKesson contracts with manufacturers to distribute drugs to customers including retail pharmacies and hospitals. Some of its contracts allow McKesson to benefit when manufacturers increase prices, by selling its inventory of a drug at the new, higher price. A slowdown in price increases is beginning to hurt its profit margins. McKesson’s stock plunge on Friday resulted in a ~$37 per share drop or ~23%, while shares of the company’s main rivals, AmerisourceBergen and Cardinal Health, fell 13% and 12%, respectively.

McKesson Corporation (NYSE:MCK) has made a series of acquisitions and partnerships to position itself for future growth and success in the growing healthcare space however the middleman model doesn’t appear to be remaining intact. Albeit concerns regarding the traditional distribution model are being challenged, McKesson has been highly acquisitive, growing dividends over time and buying back its shares to drive shareholder value. Despite its major acquisitions and partnerships (UDG Healthcare plc, Sainsbury's pharmacies, Vantage Oncology, Biologics, Rexall Health, Albertsons and Wal-Mart) in an effort to position itself for growth, these efforts have been overcome by the accumulation of the aforementioned red flags. The recent 1,600 layoffs in concert with three consecutive quarters missing revenue targets (prior to the big miss and guide down), I was wary of this stock and sold my position. The most recent quarter was the lynchpin for the momentous price drop recently witnessed. The potential erosion of the middle model, political pressures and backlash against all things drug related remain headwinds for McKesson. I capped off my most recent previous article by stating “McKesson is lever to any political induced sell-off and/or legislative action within the space I’d avoid the stock at these levels.” After this huge sell-off, McKesson may present a new entry point however currently McKesson’s P/E ratio (P/E of 14) sits in the middle of its peer cohort (McKesson, AmerisourceBergen, and Cardinal Health) so I’ll wait until this stock sheds more market value prior to considering initiating a new position in McKesson.

Disclosure: The author relinquished his shares of McKesson back in July. The author has no business relationship with any companies mentioned in this article. He is not a professional financial advisor or tax professional. This article reflects his own opinions. This article is not intended to be a recommendation to buy or sell any stock or ETF mentioned. Kiedrowski is an individual investor who analyzes investment strategies and disseminates analyses. Kiedrowski encourages all investors to conduct their own research and due diligence prior to investing. Please feel free to comment and provide feedback, the author values all responses.