As cashless societies forge ahead, Visa remains at the forefront of this movement with its dominance in the credit card space. Visa Europe acquisition, growing dividends, share buybacks and accelerating revenue and EPS growth culminates into a compelling investment as a great long-term core portfolio holding. As many countries make a secular transition towards cashless societies, the credit card transaction space will continue to reap the rewards of this trend via swipe fees and other services. Globally, Visa has been at the forefront of this space, accounting for more than 45% and 68% of all credit card and debit card transactions, respectively. Visa Inc. (NYSE:V) has it eyes set on capturing more market share from competitors, notably American Express via securing long-term branded credit card relationships with Costco, Fidelity and USAA. Visa has recently signed a partnership with PayPal which allows U.S. merchants with a Visa payWave reader to accept PayPal as a form of payment thus leveraging Visa’s payments network while benefiting Visa and merchants alike. Visa is unique in that it does not take on any financial liability as it serves as an intermediary to process payment transactions and capturing a fee for its payments technology/network. I feel that Visa is a great long-term holding that offers growth and stability independent of banks and/or interest rates. This thesis is further supported by the most recent earnings announcement.

Visa recently reported impressive Q4 earnings, specifically with regard to its integration of its recently acquired Visa Europe. Notable high-level numbers included net operating revenue and income of $4.3 billion and $1.9 billion translating into a 19% and 28% annual growth increase, respectively. These figures were driven by the inclusion of Visa Europe which has a full quarter of Visa Europe integration figures. Cross-border volume growth on a constant dollar basis was 149%. Total processed transactions were 25.9 billion, a 41% increase over the prior year (Figures 1-3). 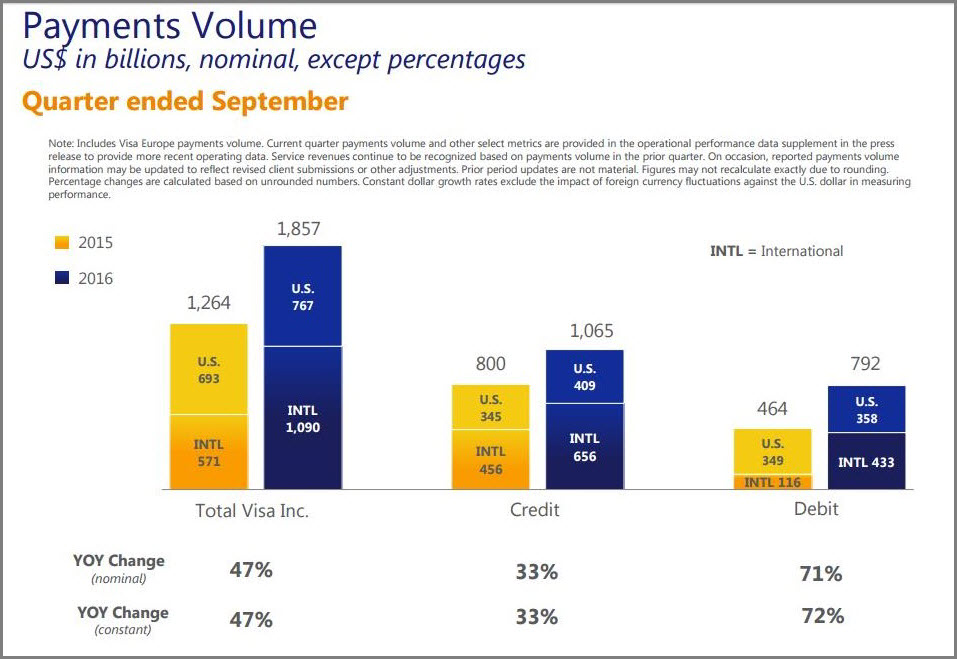 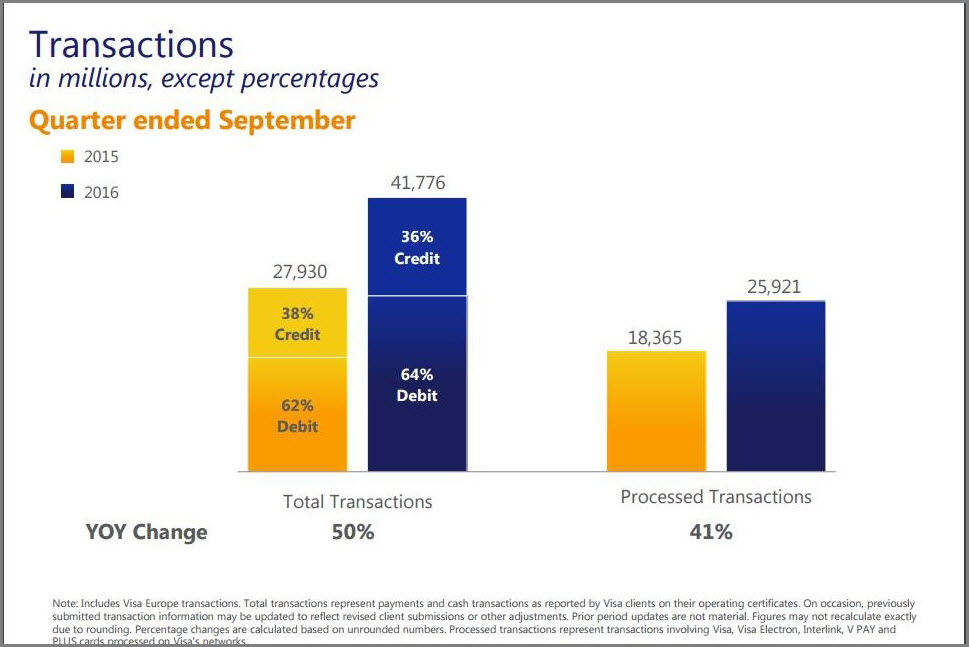 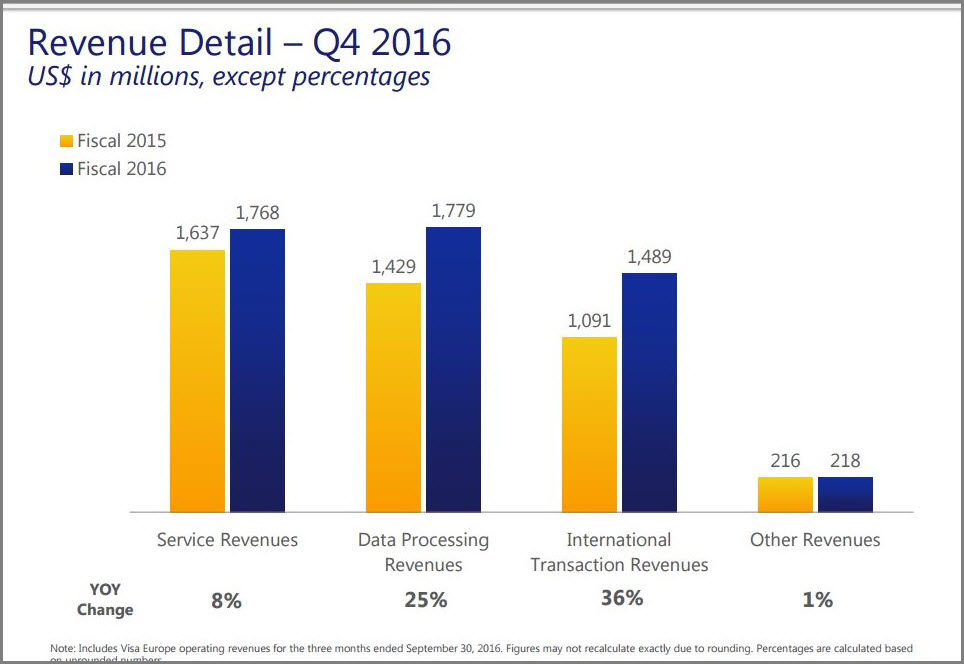 Per Visa, the acquisition of Visa Europe created one global company that further extended Visa’s payment solutions leadership while adding 3,000 European issuers, over 500 million card accounts and more than €1.5 trillion in payments volumes. The transaction capitalized on strong growth opportunities in a highly desirable region. It positions the combined Visa to create value through increased scale, efficiencies realized by the integration of both businesses, and benefits related to Visa Europe’s transition from an association to a for-profit enterprise. Visa Europe is the largest transaction processor in Europe, responsible for processing more than 18 billion transactions annually. The acquisition of Visa Europe was completed earlier this year in June.

In addition to the Visa Europe acquisition, Visa has managed to wrestle domestic market share away from rivals by out-competing for major contracts with Costco, USAA and Fidelity. As part of the Costco transition, millions of co-branded American Express Costco cards were moved over to Citi during the switch. Fidelity has over 500 million card holders that have been converted to Visa from American Express this year and Fidelity hopes that the new partnership will attract new cardholders. USAA is the 10th largest credit and debit card issuers in the U.S. and recently converted over to Visa from Mastercard. USAA processed $26 billion on its cards for purchases in 2014. Taken together, the Visa Europe acquisition and major client wins will enable sustained and durable growth now and into the future (Figure 4).

A Word of Hesitation

Its recent earnings report propelled Visa higher, reaching a 52-week high of ~$84.00 per share. This translated into a P/E ratio ~34 and a PEG ratio of greater than 2.0. This stock is richly valued and possesses a greater premium relative to other large-cap growth stocks. Any misstep in future earnings could derail this stock as it seems priced for perfection. I’d look for any significant sell-off to initiate a position at a more reasonable price, sub $78 range. The Aggregate analyst rating currently sits at 2.5 out of 10 per Thomson Reuters. Tread carefully when initiating a position in a stock with the above technical as one may be able to gain a better entry point.

Visa Inc. (NYSE:V) sits in a unique position within the financial industry where no financial liability is taken while capturing fees on over 100 billion transactions globally. As many countries make a secular transition towards cashless societies, the credit card transaction space will continue to reap the rewards of this trend via swipe fees and other Visa-branded solutions. Visa has made efforts to capture more market share with the recent addition of major customer accounts with Costco, Fidelity and USAA. Visa has demonstrated that its global presence with the Visa Europe acquisition has been a major driver of growth now that it's fully integrated. With healthy accelerating revenue, dividend increases, share buybacks and strategic partnerships/acquisitions, Visa belongs in any long-term growth portfolio.

Disclosure: The author relinquished his shares of Visa and is waiting to initiate another long position or secured put position. The author has no business relationship with any companies mentioned in this article. He is not a professional financial advisor or tax professional. This article reflects his own opinions. This article is not intended to be a recommendation to buy or sell any stock or ETF mentioned. Kiedrowski is an individual investor who analyzes investment strategies and disseminates analyses. Kiedrowski encourages all investors to conduct their own research and due diligence prior to investing. Please feel free to comment and provide feedback, the author values all responses.