Hello MarketClub members everywhere. Well, it looks like we will all be paying higher prices at the pump over the holiday season. On 22 November, a weekly Trade Triangle kicked in on February crude oil (NYMEX:CL.G17.E) $49.96 indicating that prices were headed higher. This morning crude oil is trading at $54.60 and appears to be headed to the $60 range in the near term. 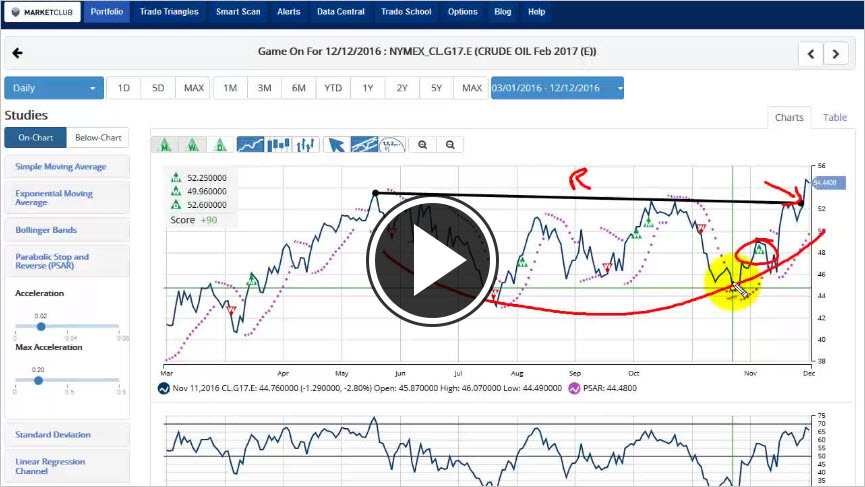 Technically speaking after hitting a low of around $36 a barrel in early January 2016 this commodity has seen a remarkable comeback. Energy is an essential element in the economy not just for industries but also for consumers. However, we are still half the price we were just a few years ago and that is a good thing. In today's video, I will be analyzing crude oil and show you exactly where I think this market can go in the near-term and the long-term.

In my last video, I stated that I believed that the Dow would be headed to 20,000 - I still believe that as we are only just 280 points away. All the Trade Triangles are positive on all of the indices and those trends are likely to continue for the balance of 2016.

Some of the potential headwinds I envision for 2017 are going to be higher fuel prices and higher interest rates and the fact that this bull market is getting very long in the tooth.

On the other side of the coin, gold prices continue to trend lower, but this is one market you want to watch in 2017. You can take all the guesswork out of gold next year by simply following the Trade Triangles. They have made money every year with these indicators.

3 Energy Stocks That Are Good To Go

All three have green Trade Triangles and are set to go higher.

One thought on “3 Energy Stocks That Are Good To Go”