This interesting year is coming to an end and in this post I would like to offer you a summary of precious metals’ dynamics in 2016.

This year metal trading was quite exciting. The chart shows that we have gone through a full Boom and Bust cycle and the top of the cycle amazingly coincides with the middle of a year, when metals showed a maximum gain (except Palladium) within the 25-50% range. Ideal distribution within a single year!

Silver has often been referred to in my posts with such phrases like ‘a top gainer’, ‘outperformed’, ‘beat them all’. Indeed, this metal scored the most amongst the metals (and even among futures) at the top with a 50% gain this summer pushing silver stocks sky-high with triple-digit gains. And then the profit taking started dragging down the best performing metal to its current 13.5% gain level. It is still an awesome profit as the S&P 500 scored a 12.5% gain this year. Silver took the second place in the metals’ competition despite having all chances to be unrivaled.

Gold had started off this year better than the other metals gaining the first rank in the first quarter with an astonishing +17% (S&P scored -2% in the same period). But then the price line went flat and let silver take top the rank with a sharper trend. The maximum gain was +29% right in the middle of the year in July. Lesser gain and lesser pain – the metal’s current gain is around 7% and its lost 22% from the top at +29% compared to the silver which lost more than 36% from the peak at +50%.

The platinum shows a classic Boom and Bust cycle as the decent 33% gain at the top in August almost evaporated by the end of the year and the cycle. The metal finishes with the zero dynamics. Platinum has almost an identical price trend as silver with the same sharp spikes and drops, but silver of course has a positive spread gap.

Now here’s our winner! It was really a Dark Horse as anyone could hardly bet on this metal, except when the majority of you bet on it vs. the Japanese Nikkei index and won in the Pendulum experiment that finished this summer. Palladium started the year in red and was below zero for the whole first quarter. And then the “volcano” awakened to bring so much gain that the metal quickly caught up with the rest of the metals rocketing from -14% to +9% within a month scoring the jaw-dropping 23%. But the price line was sharp all year and the sudden rises were followed by knee-jerking drops. One thing worth noting – the combination of higher lows and higher highs, which kept the uptrend in place as highlighted in red arrows. The speculative demand on the back of the rise of base metals pushed the price to the year record at the $774 mark (+38%) in November amid a severe drop of the precious metals’ complex. If we take the price performance from the year low at -17% to the year high at +38%, then palladium showed the best performance among precious metals with +55% gain within a single year beating silver. But the broad dollar strength dampens the price hardly and the metal finishes the year with a 17% year-to-date gain losing more than 20% from the peak. Price could be in danger as it approached the trend support.

I added the separate palladium chart below as a bonus track for you to share my thoughts about further price action.

Before I start to talk about Palladium I would like to make a forward.

Bloomberg New Energy Finance predicts that the unsubsidized total cost of ownership of BEVs (battery electric vehicles) will fall below that of an internal combustion engine vehicle by 2022. From there, it projects a steadily increasing rate of adoption, reaching global sales of 41 million—25 percent of total market share—by 2040. Indeed, the last sentence tells about the distant future, but the fact is that it is not a science fiction anymore.

Back at the end of the 19th century, the problems of the cities were tons of horse “emissions” (manure) as, for instance, 200,000 horses were on the streets of New York City. And then, at the start of the 20th century, the self-moving car was a comfortable, innovative solution for this problem. But that had changed when the cars became more affordable and flooded the cities around the world. Thus, at the end of that very century people have faced a new problem, now with car emissions. And it looks like again our inventive human mind solved the problem within the first 20 years of a new century. The solution is in the adoption of electric cars and the extension of it – self-driving electric cars to kill two birds with one stone – to save ecology and our precious lives.

Palladium is primarily used as an autocatalyst in gasoline engines. The broad adoption and affordability of electric cars would dampen demand for palladium dramatically. And in the chart below I would check out if there any signs of this global change. 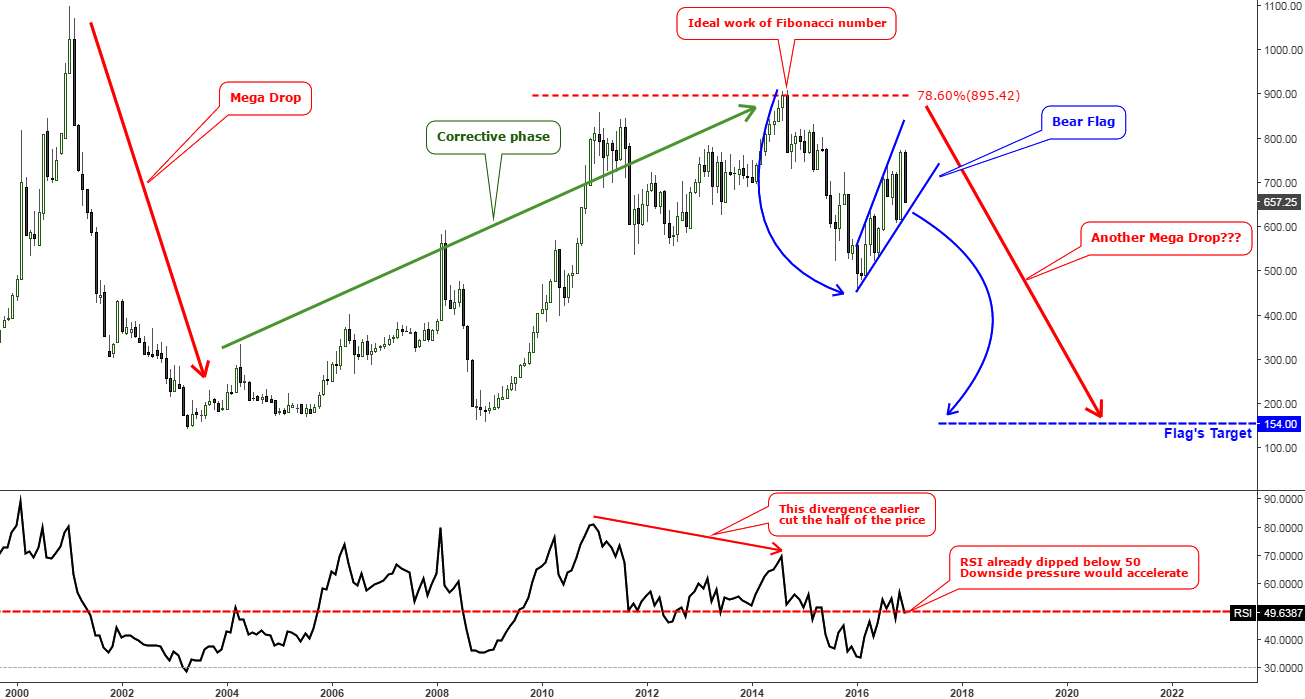 It’s always important when you trade to start from the higher time frames to see where you are on the global map. And sometimes when you think, judging from the shorter time frame graphs, that the market is bullish it appears that the global trend is bearish. This is what can be said about today’s winner palladium. On the monthly chart, we can see that the metal has been falling from the start of this century in 2001 when it peaked at $1100 mark. After that, it crashed 87% to the $144 level in just two years (highlighted by the first red arrow).

Then we can see a corrective phase (highlighted by the green arrow), which had been lasting for 11 years, when the market gained back most of the losses, but stalled at the magic 78.6% Fibonacci retracement level (usual for such type of corrections) just above the $900 handle. By the way, it’s another good evidence of three market regularities I often mention – the Fibonacci numbers work perfect and the corrections usually last longer than primary moves. The third thing is the divergence – RSI topped in 2011 but the market continued to move upside and the higher price in 2014 wasn’t confirmed by RSI indicator and later we can see how the price was halved down to $454 level. I highlighted that move in a blue curved arrow.

I contoured this year’s surge of the price of palladium with two blue diverging trendlines. It could be considered as an uptrend on the daily chart, but on the monthly chart this is a countertrend corrective move shaping a well-known pattern called The Bear Flag. It implies a huge risk for today’s winner as it targets a deep $154 level (highlighted in second blue curved arrow) once the price breaks below the lower trendline at $610 level. The RSI already dipped below the crucial 50 level. Should it be another Mega Drop caused by the electric cars offensive? Let’s live and see!

One thought on “Precious Metals In 2016: The Dark Horse Won The Prize”