After the S&P 500’s rather flat performance over the first three weeks of January, the Index has finally broken higher, pierced through the 2,280 resistance, and seems well on its way to surge above 2,300. So, the question of potential profit taking for the Index at this time may raise some eyebrows. But if we are to take the signals coming from the Federal Reserve over the past few weeks, this is exactly when we should be worried about profit taking and a jump in volatility for the Index.

While the S&P 500 (CME:SP500) was muddling through over the past few weeks, some attributed it to the protectionist stance of the new US president, e.g. the looming threat of a trade war with China, the risk of import levies and, of course, the latest events of this week. President Trump, in a characteristically dramatic fashion, announced the revocation of the Trans-Pacific Partnership Agreement and proclaimed his intention to renegotiate NAFTA, the North American Free Trade Agreement. And how did investors respond? By pushing the S&P 500 up and out of its stagnation and into a new high. Because, while investors are concerned about the risk of a protectionist trade policy, their concerns are somewhat soothed by Trump’s plan to slash the US corporate tax to 15% and boost infrastructure spending.

But what about the S&P 500 are the bulls ignoring? The Fed and, specifically, how the Fed might react to Trump’s planned tax cuts.

One of the centerpieces of President Trump’s economic plan is to stimulate the US economy with the dual combination of aggressive tax cuts and an increase in infrastructure spending. With the US corporate tax at 38.9%, compared with 20% in the UK or 26.5% in Canada, Trump’s plan to cut the corporate tax rate to 15% certainly has merit.

It will encourage US corporates to repatriate funds and invest in the domestic economy. US GDP growth for 2017 could certainly accelerate above the Fed’s projection of 2.1%. Most importantly for investors, shareholders may end up with more in profits on the bottom line.

But the problem with that plan is that such aggressive tax cuts, alongside higher infrastructure spending and possibly higher defense spending, will inevitably lead to higher deficits in the short term. The designated Treasury Secretary, Steven Mnuchin, pledged to keep the deficit under control. But according to the Congressional Budget Office, sees that Trump’s planned tax cuts and infrastructure spending will increase the US deficit by $10 Trillion over the next decade.

Over the long run the Trump administration’s cutting of the budget in other areas and higher US growth as a result could help bring the deficit back down, that could definitely be in the longer run. But in the short run, there just isn’t enough political flexibility to fund massive tax cuts and increased infrastructure spending with massive budget cuts.

Indeed, US GDP growth is likely to accelerate above its current level. But higher deficits alongside higher growth will lead to more inflationary pressures. And that does not sit well with the Fed. With the Fed inflation target at 1.9% for 2017, alongside three rate hikes, the Fed will have to be rather hawkish to preserve its inflation target. A higher deficit, especially from lower taxes, would inflate the economy even further and would force the Fed to act. How?

FOMC board member Governor Lael Brainard, in a paper written to Brookings Institute in DC, wrote that Trump’s budget could bring the Fed to start shrinking its $4.5 trillion balance sheet. According to Patrick Harker, the Philadelphia Fed chief and another FOMC board member, that will be openly debated when the Fed Funds rate reaches 1%. With the current rate at 0.75%, we are only one rate hike away.

That is a very clear warning from the Fed that it will not fund higher deficits. In other words, the Fed is sending a very clear signal to Trump that, if deficits jump, the Fed will be getting out of the US Treasury market. When the Fed finally ended QE in October of 2014, it also pledged to maintain its current balance sheet size of $4.5 trillion. That meant that as a US Treasury bond or note matured, the Fed would use the receivables to purchase a new note or bond.

The majority of the Fed’s Treasury holdings are notes with maturities of one year or less. If the Fed only stops repurchasing notes, according to one Morgan Stanley estimate, that would reduce the Fed’s holdings of US Treasury notes by $600 billion. And that means a significant reduction of liquidity in the financial system. If the Fed decides to actively sell its holdings, the squeeze on liquidity will be even stronger. And when liquidity drains volatility jumps. And with such a scale of liquidity drain, high volatility will not be isolated to the bond market; it will inevitably radiate into the stock market and, as you might have guessed, the S&P 500 stock index.

With the Fed Funds rate not likely to hit 1% before March, the trigger for the Fed to trim its balance sheet has some time to occur. Meanwhile, the S&P 500, as well as other major indices such as the Dow, may enjoy the tailwind of promised lower taxes and increased government spending and perform well. But, as we approach the end of the first quarter, the time for prudence will be at hand. As the VIX chart below indicates, current volatility is at a record low for the index. That means that the Fed’s move to drain liquidity is not yet priced in and that means that volatility for the index has plenty of room to rise and bring with it choppiness for the S&P 500 (CME:SP500). 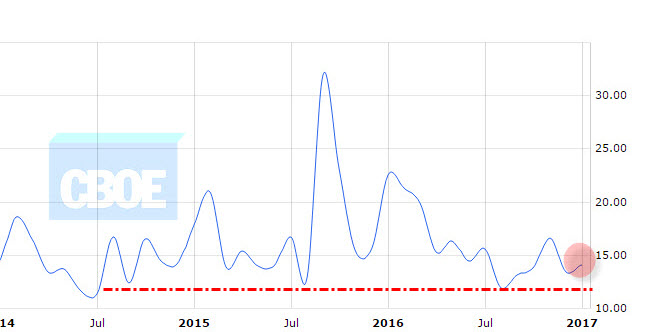 One thought on “S&P 500: Prepare For Choppiness”