According to the Kuwait News Agency, Kuwait Oil Minister Essam Abdul Mohsen Al-Marzouq, chairman of the Joint OPEC-Non-OPEC Ministerial Monitoring Committee (JMMC), has stated that February compliance by OPEC was 140%. But according to the figures that OPEC members submitted to the organization, compliance was just 42 percent, relative to the total OPEC ceiling (32.5) in the November 30th Agreement. If those figures are correct, this Agreement is in serious trouble.

Indonesia had been an OPEC member, and its volume (about 750,000 b/d) was included in the ceiling. But it dropped out, and so the new effective ceiling became 31.750 million barrels per day.

In the Agreement, the members chose to use “secondary sources” of their crude production to assess compliance. The idea was to have a more objective measure so individual members could not cheat by submitting low figures to make it seem as if they are complying.

But the members own figures for February turned out to be 582,000 b/d higher than those submitted by secondary sources, as shown below. (Iran, Libya and Gabon did not submit their own figures.) 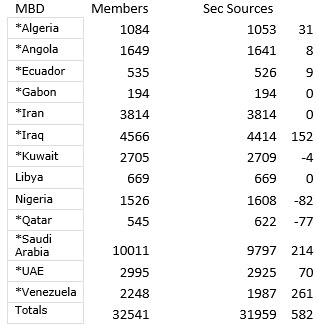 OPEC provided “reference” volumes for all members except Nigeria and Libya because they had no ceilings. The total for all of OPEC (excluding Indonesia) was 33.107 million barrels per day.

In addition to the above misrepresentation, OPEC members recently made others. OPEC’s Secretary General Mohammad Sanusi Barkindo stated, "For the record, we didn't have any (oil price) war." He also blamed American shale oil for ‘triggering this severe cycle that we are still battling to come out of," when OPEC had increased production 2.8 million barrels per day (mmbd), whereas the U.S. had reduced its output by 0.4 mmbd from November 2014 to November 2016. Meanwhile, non-OPEC partners have done next to nothing, characterizing seasonal and normal declines, as cuts.

Barkindo is saying the “shale guys” are a “strategic partner in the rebalancing process.” But American shale companies are ramping up production by as much as 20% this year, according to their corporate websites.

Crude oil prices broke right through the $50 “psychological barrier,” without a pause last week. OPEC had been successful in creating “headline risk” for about a year. But at some point, they had to deliver.

They claimed global oil inventories could be quickly drained. But instead, OECD oil inventories have risen during the first two months the “historic” Vienna Agreement has been in place. The Energy Department estimates that 300 million barrel glut has increased by another six million barrels since end-December.

OPEC has lost a lot of credibility. They conned oil traders into building-up historically-high long positions, based on false promises.

Much of the length in these positions was $50 or higher. And so, more and more positions are in the loss column. “Stops” will be hit, automatically taking out the length, but that requires selling. More selling leads to lower prices. It’s a process that feeds upon itself.