I’ve been a long bull of The Walt Disney Company (NYSE:DIS) stock, particularly since the post-ESPN induced sell-off in throughout 2016. Since the lows of October 2016, Disney has seen a huge appreciation in stock price, breaking out to above $115 per share level as of late. This upswing has been on the heels of multiple catalysts such as of reporting record annual results, breaking the all-time worldwide box-office record, witnessing a slew of analyst upgrades, Iger extending his contract as CEO, ESPN woes subsiding, Shanghai Disney opening and Disney’s movie line-up announced through 2020. This inflection point coincided with Doctor Strange, Moana and Star Wars Rouge One in Q4 of 2016 followed by a record opening for its live action film, Beauty and the Beast. The stock fell from the $120s in late 2015 to the high $80s and had been stuck in the $80-$90 range all throughout 2016. This perpetual slump was almost entirely attributable to the decrease in ESPN subscribers and subsequent revenue and profit declines from that franchise. The ESPN franchise within the Media Networks segment generates revenue/operating income that is disproportionate to the amount of the company’s overall revenue and operating profit. Thus, one can see why investors were spooked after consecutive significant declines in ESPN subscribers and thus financial numbers over the past three years. Excluding ESPN, Disney has been executing well and reporting record numbers throughout all of its other business segments. Disney has a deep and diversified enough entertainment portfolio that made a compelling case that these ESPN fears were being overblown. Disney offered and still offers a compelling long-term investment opportunity considering the growth, pipeline, diversity of its portfolio, share repurchase program and dividend.

Disney has witnessed a slew of upgrades and positive commentary regarding its shares. RBC stated that Disney possesses “massive balance sheet potential” and would have more than $65 billion for a transformative acquisition. RBC upgraded Disney with a $130 price target. Evercore ISI upgraded Disney with a target price of $120. Goldman Sachs recently upgraded Disney, issuing a target price of $134. Goldman stated “We see four key drivers: (1) DIS’s FY18 film slate might be its best ever; (2) ESPN headwinds may abate; (3) Major new park attractions start opening in CY17 through CY19. (4) DIS would potentially benefit the most in the peer group from corporate tax reform.” Guggenheim upgraded Disney to a buy and boosted the firm's price target to $128 from $118. In early April, Disney was added to Goldman’s Americas Conviction List with a $138 price target.

“We expect FY2018 to be Disney’s best film slate ever with 4 Marvel films, 2 Star Wars films and 3 animated films like Beauty and the Beast, all of these films have large consumer product opportunities which could drive upside at the studio and consumer products” - Analyst Drew Borst, Goldman Sachs

Although I feel that these analyst upgrades were far too late as the stock elevated to the high $90 or beyond the $100 range prior to any analyst issuing buy ratings, this further bolsters the long-term investment case and adds to the bull case (Figure 1). 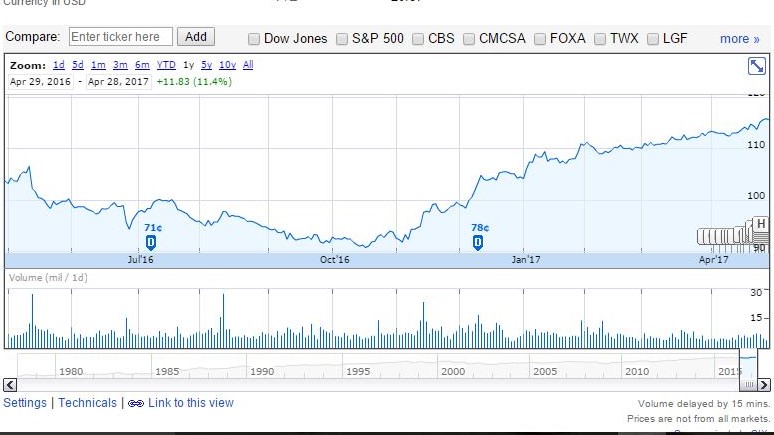 The Walt Disney Company (NYSE:DIS) recently announced that its ESPN segment terminated ~100 employees to reflect the changing media environment. The result will be focused on digital presence and per ESPN president, John Skipper changes in ESPN content must “go further, faster… and as always, must be efficient and nimble”. As the consumption of media continues to change, Disney is trying to contend with this migration away from traditional media to embrace social and streaming. Disney announced that ESPN lost ~2 million subscribers in FY 2016, marking the lowest number of subscribers since 2005. ESPN subscribers fell by 2.2% to 90 million for the third straight annual decline albeit it’s the slowest rate of decline compared to 2015’s 3.2% slide to 92 million and 2014’s 4% fall to 95 million after peaking at 99 million in 2013. Disney has initiated corrective actions regarding the ESPN declines. Disney recently announced a deal with Hulu for live-TV streaming which will include ESPN live and other Disney/ABC features (Disney owns a 33% stake in Hulu). Vice and Disney also set a production deal with ESPN that will see programming shared between the two companies. Disney is the largest stakeholder in Vice after putting $400 million into the company in addition to the piece it holds through its stake in A&E Networks. Disney announced that it is buying a 33% stake in BAMTech. This is intended to accelerate growth in direct-to-consumer video streaming. This will be a new ESPN-branded multi-sport direct-to-consumer service. Disney said that BAMTech would work with ESPN to launch a direct-to-consumer, subscription streaming service, featuring live sporting events at the regional, national and international levels. During the annual investors meeting, Bob Iger stated that an ESPN direct-to-consumer offering would launch by the end of the year in 2017. ESPN’s decline has slowed and perhaps will reach an inflection point where other initiatives will begin to bear fruit and declines will be fully arrested. Once the ESPN declines are fully arrested and initiatives come to fruition, I feel that these shares will have more upside.

Disney’s 2015 record of the worldwide total gross was at $5.84 billion, thanks in large part to Star Wars: The Force Awakens. Given the success of Doctor Strange and Moana, the $6 billion mark was already broken prior to Star Wars Rouge One hitting theaters to round out 2016. Doctor Strange hauled in $673.5 million and Moana took in $565.7 million worldwide. Star Wars Rogue One hit theaters on Dec. 16th and hauled in $155.1 million in its opening weekend and has grossed $1.05 billion worldwide.

Disney recently broke its own annual box office record domestically as well by recording over $3 billion in box office receipts. This comes on the backs of very successful fourth quarter hits such as Doctor Strange, Moana and Star Wars Rogue One. Disney became the first studio to reach the elusive $3 billion mark at the domestic box office. This was anchored by its “Big Three”, the three highest-grossing domestic films of 2016 with Finding Dory, Star Wars: Rouge One and Captain America: Civil War grossing $486 million, $528 million and $408 million, respectively. Let’s not forget about Zoopotia and the Jungle Book grossing $341 million and $364 million, respectively. It’s noteworthy to point out that all of these films have grossed over $1 billion worldwide with the exception of The Jungle Book missing this mark by $33 million coming in at $967 million worldwide.

After its initial weekend release, Beauty and the Beast earned $174M. These opening weekend numbers were more than enough to displace the previous best ever March debut (Batman v Superman: Dawn of Justice). It’s also the best debut for a PG-rated movie and easily the top opener for 2017 thus far. This opening gives Disney six of the top seven opening weekends of all time. Beauty and the Beast has a domestic run of $473.7M thus far. Foreign results continue to be strong as well, giving the picture over $1.1B cumulative worldwide box office gross. Disney has plans to continue its live-action adaptations after successes with Alice and The Jungle Book with Dumbo, Mulan, Little Mermaid, Aladdin, The Lion King and Cruella De Vil over the next few years.

Disney’s pipeline is loaded with Star Wars, Pixar, Disney and Marvel films over the next five years, many of which will be $1 billion plus films (Figure 2). Couple that with licensing, merchandising, sequels, theme parks, etc., and this will likely serve as huge catalysts moving into the future for box office numbers. Specifically, Disney is now able to leverage ancillary Marvel characters that it doesn’t own after Marvel had to piece meal its properties due to financial distress. Spider-Man was sold to Sony and The X-Men were sold to Fox for example. Disney owns rights to the vast majority of Marvel characters however when it comes to Spider-Man, a new agreement between Sony and Disney provides a mutually beneficial scenario. Spider-Man was first introduced alongside the Avengers in Captain America: Civil War in 2016 and will be co-starring with Tony Stark/Iron Man later this summer in Spider-Man: Homecoming. An agreement between Marvel (Disney) and Sony states that Marvel can include Spider-Man in Captain America: Civil War and future properties. Both studios will keep their own box office returns for any Spider-Man related revenue. This could be a major tailwind now that Spider-Man can be included in spinoffs with Avengers and other Marvel characters with no royalty costs. This will be exciting to see this unfold and how Marvel will layer in Spider-Man to its advantage over the next few years in the cinema. 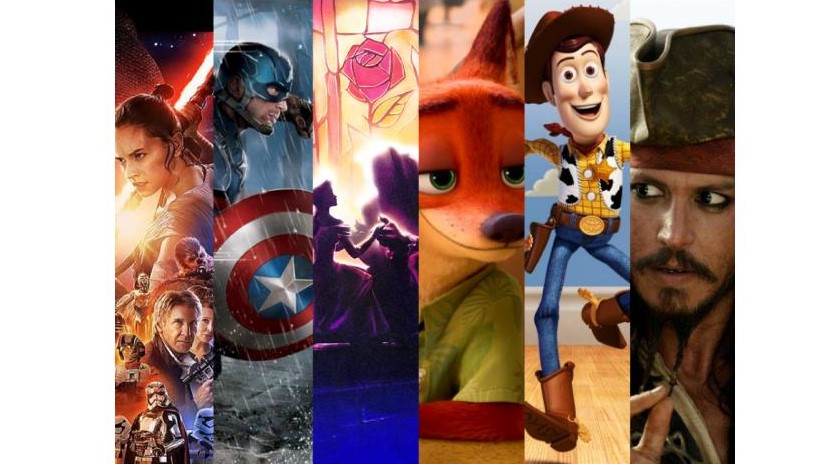 Figure 2 – Film franchises being released through 2020

Disney’s Board of Directors announced that it had extended Bob Iger’s contract as Chairman and Chief Executive Officer to July 2, 2019. “Given Bob Iger’s outstanding leadership, his record of success in a changing media landscape, and his clear strategic vision for Disney’s future, it is obvious that the Company and its shareholders will be best served by his continued leadership as the Board conducts the robust process of identifying a successor and ensuring a smooth transition,” said Orin C. Smith, Independent Lead Director of the Disney Board.

“Leading this great company is a tremendous privilege, and I am honored to have been asked to continue serving as CEO through July 2, 2019,” Mr. Iger said. “Even with the incredible success the Company has achieved, I am confident that Disney’s best days are still ahead, and I look forward to continuing to build on our proven strategy for growth while working with the Board to identify a successor as CEO and ensure a successful transition.” Since Bob Iger became CEO, The Walt Disney Company has been recognized as one of the “Most Reputable Companies” in both America and the world by Forbes magazine (2006-2017); one of “America's Most Admired Companies” by Fortune magazine (2009-2017); one of the “World's Most Respected Companies" by Barron’s (2009-2016); one of the “Best Places to Launch a Career” by BusinessWeek magazine (2006-2010); and as “Company of the Year” by Yahoo Finance (2013).

The lingering ESPN issues are being addressed in a variety of ways via Hulu, BAMTech investment, Vice production deal, Sling TV and thae latest layoffs. Disney’s diverse portfolio consists of Marvel Entertainment, Lucasfilm, Pixar, ESPN, ABC, 32% shareholder in Hulu and of course the core Disney franchise (Disney Studios, Disney consumer products, Parks and Resorts and Disney Cruise Line) which lessens the dependence on ESPN moving into the future. During the annual investors meeting, Bob Iger stated that an ESPN direct-to-consumer offering would launch by the end of the year in 2017. Once the ESPN initiatives begin to show results in a backdrop of all its other franchises continuing to post record numbers, shares will likely have more upside. Disney has a deep and diversified enough entertainment portfolio to make a compelling case that these ESPN fears are overblown. Disney continues to deliver EPS and revenue growth. The Walt Disney Company (NYSE:DIS) has steadily increased the dividend and engaged in share buybacks to drive shareholder value. The long term picture Disney picture remains well intact with many catalysts in play through 2020, thus I feel the stock has room to continue its upward trend.

Disclosure: The author owns shares of Disney and is long Disney. The author has no business relationship with any companies mentioned in this article. He is not a professional financial advisor or tax professional. This article reflects his own opinions. This article is not intended to be a recommendation to buy or sell any stock or ETF mentioned. Kiedrowski is an individual investor who analyzes investment strategies and disseminates analyses. Kiedrowski encourages all investors to conduct their own research and due diligence prior to investing. Please feel free to comment and provide feedback, the author values all responses. The author is the founder of stockoptionsdad.com a venue created to share investing ideas and strategies with an emphasis on options trading.