McKesson Corporation (NYSE:MCK) reports Q4 2017 numbers on the 18th of May after the market close. McKesson has been very volatile after the last handful of earnings announcements, and I don’t expect this earnings announcement to be any different. There’s been a tremendous amount of pressure on the pharmaceutical supply chain players in terms of pricing competition and potential erosion of the pharmaceutical wholesaler model. Additionally, social and political pressures over drug pricing have exacerbated these issues to the point of fierce pricing competition and the slowing of drug price increases which negatively impacts McKesson’s ability to take larger dollar amount cuts from the volume of business. The pharmaceutical supply chain cohort started a nascent rally as of recent however Cardinal Health (CAH) threw cold water on this rally and sent the cohort lower after it reported in April. McKesson has missed its revenue numbers for five consecutive quarters. The stock sold off shapely as a result of its recent revenue miss, sliding 8.3% or $12.55 per share. McKesson has paid dearly for this string of revenue misses, shedding over $102 per share or 42.5% from its all-time highs in May of 2015 falling from $240 to roughly $138 as of its recent Q3 2017 miss (Figure 1). Will this time be different or did Cardinal Health serve as a potential proxy for McKesson’s quarterly numbers? McKesson has made a string of acquisitions over the past year, and the sentiment is negative therefore I feel if these already low expectations are not met, the stock will revisit the $130s. Conversely, if McKesson surprises to the upside, the stock could easily revisit the $150s. 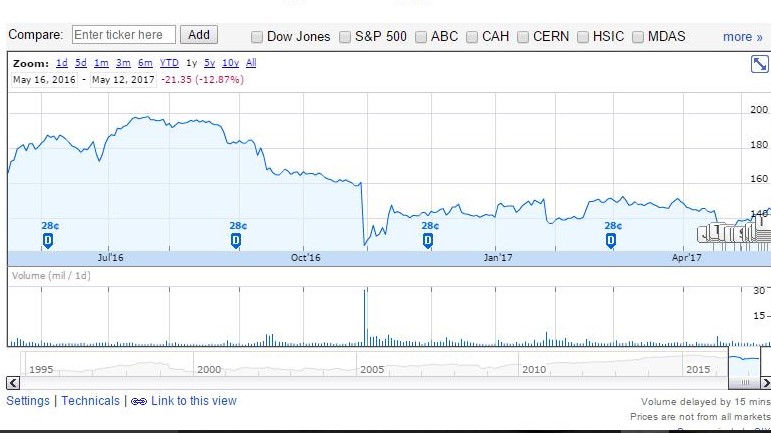 The pharmaceutical supply chain cohort has been faced with an increasingly challenging healthcare landscape as political posturing, drug pricing scrutiny, overall negative sentiment towards pharmaceutical companies due to price gouging allegations and the overall rotation out of healthcare related stocks. McKesson was faced with drug pricing concerns along with the negative social and political backdrop. Pharmaceutical distribution companies have been under tremendous pressure as of late due to political pressures regarding the pharmaceutical supply chain and drug pricing concerns.
The middleman portion of the pharmaceutical drug supply chain model is slowly shifting away from the traditional means of delivering drugs to hospitals and pharmacies in a more economically-friendly manner. More often than ever hospitals and pharmacies are establishing direct relationships with manufacturers thus buying direct such as the recent CVS deal to supply the generic EpiPens. Manufacturers have increased their use of direct accounts thus disrupting the traditional distribution model long dominated by companies such as McKesson. This action hits distributors particularly hard since they make their money by moving product within the supply chain where greater than 95% of McKesson’s revenue comes from this distribution space. After last quarter McKesson stated that competition and a slowdown in price inflation for brand-name drugs would reduce its profits. McKesson said it has been forced to lower the prices it charges to independently owned pharmacies to match the prices charged by competing wholesalers looking to gain market share. “We have made a very significant change in our pricing practice to match where the market is today,” McKesson CEO. McKesson contracts with manufacturers to distribute drugs to customers including retail pharmacies and hospitals. A slowdown in price increases is beginning to hurt its profit margins.

Recently, upon the earnings announcement from Cardinal Health, shares of all the major pharmaceutical supply chain stocks sold off. This included McKesson and AmerisourceBergen (ABC) as collateral damage when Cardinal Health reported earnings. Cardinal Health provided a softer guidance for non-GAAP 2017 numbers and mentioned that generic price deflation was a significant headwind for the industry. Shares of Cardinal Health sold off 12% on the news and others in the cohort sold off as well hitting McKesson and AmerisourceBergen with sell-offs of 4% and 4%, respectively. McKesson eluted to the drug price deflation in its previous conference call which mirrors the news from Cardinal Health. My concern here is that these issues may be far from over and may take a few more quarters for these negative headwinds to subside.

Despite these issues, McKesson has made a series of acquisitions and partnerships over the last two years to position itself for future growth. Albeit concerns regarding the traditional distribution model are being challenged and pricing competition has taken hold in the space, McKesson has been highly acquisitive, growing dividends over time and buying back its shares to drive shareholder value. Despite its major acquisitions and partnerships (UDG Healthcare plc, Sainsbury's pharmacies, Vantage Oncology, Biologics, Rexall Health, Albertsons, Wal-Mart, and CoverMyMeds) in an effort to position itself for growth, these efforts have been overcome by drug pricing concerns, political backdrop, middleman pressures, pricing competition and declining revenues. McKesson recently announced intended acquisition of Canadian pharmacy group Uniprix. Uniprix operates 330 independent pharmacies, and in 2009 it rejected McKesson’s takeover offer. All of these negative issues have ostensibly been priced into the stock now, and with the stock trading at 2013 levels I feel McKesson is a buy if it sells off after earnings.

McKesson Corporation (NYSE:MCK) has been very volatile after the last handful of earnings announcements, and I don’t expect this earnings announcement to be any different. This multi-year sell-off was justified as McKesson has missed revenue targets for five consecutive quarters. In addition to the missed revenue targets, McKesson along with others in the space have been faced with an increasingly challenging healthcare landscape as political posturing, drug pricing scrutiny, overall negative sentiment towards pharmaceutical companies due to price gouging allegations and the overall rotation out of healthcare related stocks. Despite these issues, McKesson has made a series of acquisitions and partnerships to position itself for future growth. Despite these moves, growth has been difficult. Considering the drug price deflation environment and Cardinal Health’s earnings, could this serve as a proxy for McKesson’s upcoming results? Its major acquisitions and partnerships (UDG Healthcare plc, Sainsbury's pharmacies, Vantage Oncology, Biologics, Rexall Health, Albertsons, Wal-Mart, and CoverMyMeds) were made in an effort to position itself for growth and diversification. As these collective measures stabilize revenues and potentially reaccelerate growth, then this stock could be poised for a rebound over the intermediate term. This upcoming earnings announcement will be a barometer for this potential turn in the business. If McKesson sells off on the announcement of its upcoming earnings, then I’d be a buyer.

Disclosure: The author relinquished his shares of Visa and is waiting to initiate another long position or secured put position. The author has no business relationship with any companies mentioned in this article. He is not a professional financial advisor or tax professional. This article reflects his own opinions. This article is not intended to be a recommendation to buy or sell any stock or ETF mentioned. Kiedrowski is an individual investor who analyzes investment strategies and disseminates analyses. Kiedrowski encourages all investors to conduct their own research and due diligence prior to investing. Please feel free to comment and provide feedback, the author values all responses. The author is the founder of stockoptionsdad.com a venue created to share investing ideas and strategies with an emphasis on options trading.