Oil prices peaked in this latest cycle at about $107/b in June 2014. Prices had dropped below $80/b by the OPEC meeting in November 2014, and OPEC had had enough of America's shale oil taking away their market share and declared a market share battle.

Prices dropped for more than a year before bottoming January 2015, and retesting that bottom again February. On Friday, February 12th, the March crude futures contract spiked 12.2% based on speculation of a possible OPEC agreement to cut oil production. Even though the four oil producers announced that they had tentatively agreed to "freeze" their production, the subsequent price increases have added a total of about $4 per barrel to the OPEC Basket Price.

Although OPEC has not cut one barrel of production, the market has altered its distribution of potential future oil prices, raising its probability-weighted expected value. The fact that OPEC and Russian producers are talking and have agreed to something has led the market to think there could be movement toward shoring up prices from their disastrously low levels.

OPEC seems to be learning this lesson. Venezuela oil minister Eulogio Del Pino Tweeted on Tuesday that "an expanded meeting of OPEC and non-OPEC producing countries that support production freeze will be held in mid-March." Such an announcement may ensure the price gains hold.

“Even if OPEC cannot attain that goal over the next year, monthly talks, giving the impression of making progress, might be enough to maintain a $10/b gain based on the market's price expectations. For OPEC producers, that's a gain of about $10 billion a month, $120 billion a year, a nice return for theatrics."

On March 9th, 2016, I wrote ("Why Crude Prices May Have Bottomed") that my BRS Oil Price Signal had flashed "green." The daily signal is the product of my Vertical Risk Management model (click here for a slideshow presentation).

OPEC got a new Secretary General on August 1st, Mohammad Sanusi Barkindo. Over the summer of 2016, oil prices had slid and it became apparent that Mr. Barkindo's job was to manipulate oil prices through press releases and comments in the media. He obviously understood that oil traders could move the oil price up and down.

According to several accounts, he began meeting with oil traders beginning in October. Ed Morse, head of commodities at Citibank, reportedly arranged introductions between Barkindo and more than 100 hedge fund managers and oil buyers in Washington, D.C., New York and London.

OPEC reported such meetings in its press releases. In February, it reported:

“Whilst in London, the Secretary General also participated in the 2017 Annual IP Week Client Briefing Seminar organized by Citigroup. He was interviewed by Ed Morse, the Global Head of Commodities Research at Citigroup, with more than 100 leading companies, including producers, consumers, traders and fund managers, in attendance."

“The Secretary General and the OPEC delegation also participated in an IHS Markit-organized meeting with leading actors from the financial and investment community. It was an opportunity to exchange viewpoints and further explore the interactions between financial and physical markets." 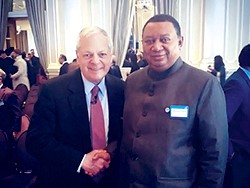 Barkindo's mission was to persuade the traders that OPEC was serious about reducing the glut. Mr. Morse said fund managers came away impressed.

But a deal was not ripe. And the Saudi congregation assembled several high-profile oil traders just before the November 30th meeting to get their assessment of what would happen to oil prices if they came away empty-handed. One of the traders was identified to be Pierre Andurand. OPEC was told prices would collapse.

OPEC "pulled a rabbit out of a hat," I wrote, by making a deal when members such as Nigeria, Libya, Iran, and Iraq had made their positions clear for months that they would not cut production. Oil prices rose on the back of the agreement.

The deal would go into effect January 1st, and Barkindo and OPEC members, such as Saudi Arabia, and non-member Russia, talked up compliance non-stop. The hedge fund industry loaded up on long futures and options positions, reaching a new record level long by mid-February, increasing the odds of lower prices as data failed to support the narrative. 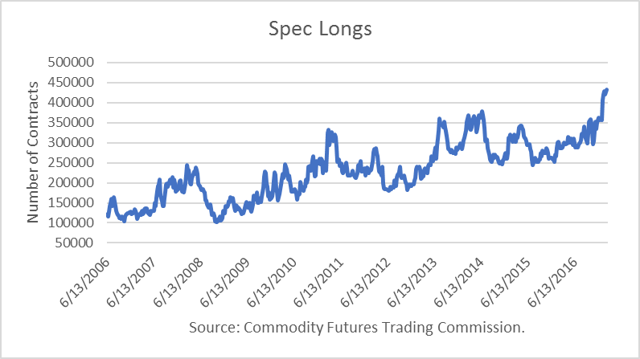 Global oil inventory data showed OECD stocks rising instead of dropping, as the narrative had implied. U.S. Energy Dept.'s ending-April commercial stocks were 60 million barrels higher than at the end of December, while OPEC's numbers show a 70 million barrel build through March.

Mr Andurand informed investors on April 24 that oil prices "will reach new highs." But in a later news report, he had been liquidating his positions. On May 5th, it was reported that he had liquidated all of his long positions. 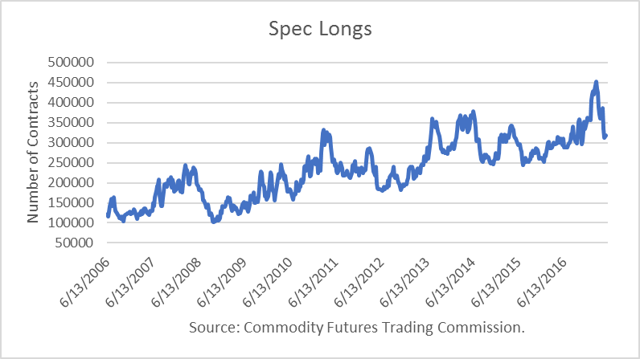 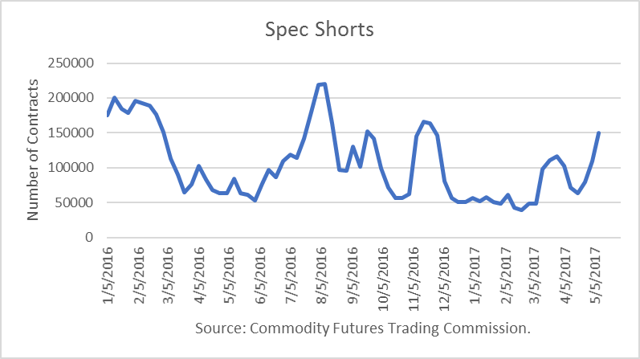 The liquidation of long positions and rise in short positions undercut prices, which had fallen to pre-deal levels. Even if OPEC had cut production as it said, there was not solid proof it had cut exports.

Traders such as Andurand and Andy Hall lost 16-17% in 2017 betting on OPEC's cuts. So when the Saudi and Russian energy ministers jointly announced on May 8th that they would back an extension of the cuts through the end of the year, the oil market barely budged. It was down the next day.

Then the two energy ministers announced that they would back an extension through March 2018 on May 7th. According to one OPEC official, "We are hitting back at the shorts," he said.

OPEC attempted to get shale oil producers to join their cuts. But that is illegal in the U.S. and didn't work. So OPEC apparently tried to persuade oil traders to conspire to push prices higher.

OPEC is still trying to win over big hedge funds, but the group "is finding that falling oil prices are making that a tough sell." I think OPEC blew it. If they wanted to prove their cutbacks as quickly as possible, they should have cut exports to the U.S. (although another buyer might resell it to U.S. refiners). If they had delivered for the hedge funds, it could have been a powerful alliance, privately telling them what they are going to do, and when (though I'm not sure about the legality of it).

"It's one thing to talk about cuts. It's another thing to see them," said Gary Ross, head of global oil at PIRA Energy, a forecasting unit of S&P Global Platts. I wrote recently that I would like to see some proof of these cuts beyond reporting by secondary sources who obtain the information from the national oil companies.

Ed Morse is still touting OPEC's message. He says oil will go to $60 by year-end and global supplies will be rebalanced. With the OPEC official stating they are targeting the shorts, we may get some surprise in this week’s OPEC meeting communique designed to push prices higher.

One thought on “OPEC Caught a Tiger By The Tail”