I first highlighted HealthEquity Inc. (NASDAQ:HQY) last month as a great growth play in the ever expanding Health Savings Accounts (HSAs) space when the stock was trading at $42 per share. HealthEquity just reported blowout numbers that beat on both the top and bottom line, posting 25.9% year-over-year growth in revenue and now trading at $53 per share or 26% appreciation in stock price. Briefly, HealthEquity’s IPO was in 2014 and since then the stock has returned 210% moving from ~$17 to currently ~$53 (Figure 1). HealthEquity has been riding this secular growth market since its IPO and looks to be continuing this performance. Over the four quarters including the most recent earnings announcement, HealthEquity has beaten on both EPS and revenue while posting double-digit growth (Figure 2). Revenue came in at the following: Q2 - $44.2M (45.0% growth), Q3 - $43.3M (42.0% growth), Q4 - $46.81M (30.4% growth). The sustainability of this growth will likely move in lock-step with the growth in the HSA market while optimizing revenues extracted from the investments within these accounts via offering investment advising, collecting fees from the investment line-up and its newly announced 401k with paired HSA offerings. 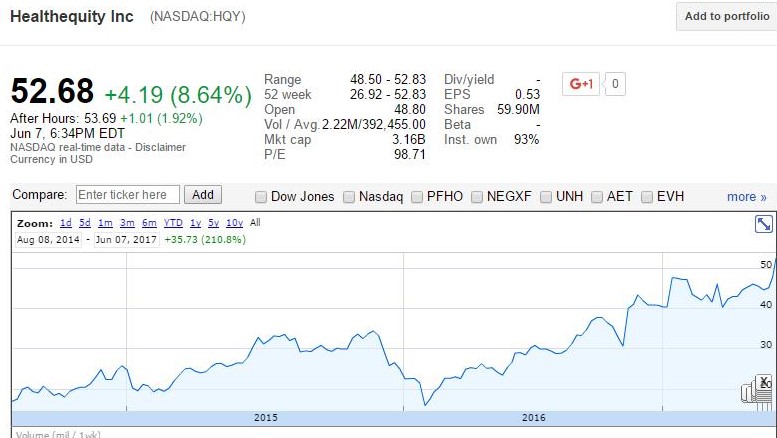 Figure 1 – HealthEquity’s performance since its IPO in 2014 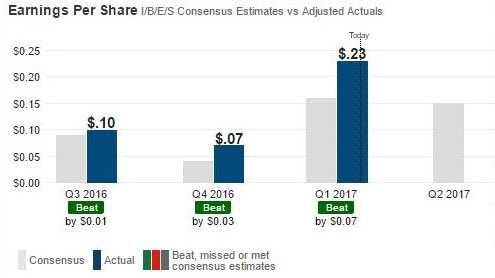 I feel that HealthEquity Inc. (NASDAQ:HQY) will continue to post strong grow as it services the double-digit HSA growth market and manages more assets and investments within these accounts. As HealthEquity rolls out additional products such as the launch of its own 401k offerings paired with HSA accounts, revenue will continue to accelerate.

HealthEquity’s Q1 Earnings and Growth Ahead

HealthEquity reported another great quarter and the stock responded by appreciating by 10.7% including after-hours trading moving from $48.50 to $53.70. HealthEquity reported EPS of $0.23 and revenue of $55.4 million. These EPS and revenue figures beat estimates by $0.07 per share and $0.63 million with the latter revenue figure posting 25.9% year-over-year growth. On the heels of these earnings, Chardan Capital Markets raised its price target on HealthEquity to $57.00 from $53.00.

HealthEquity is posting accelerating revenue growth. Q4 revenue came in at $46.81 million vs. Q1 revenue of $55.4 million or an 18.4% back-to-back quarter growth. S&P Capital IQ ranks HealthEquity’s growth stability at an 80 on a 1-100 scale indicating strong growth will remain intact. Etrade predicts HealthEquity will earn $0.71 per share in FY 2019 vs. $0.44 per share in 2016 while revenue will rise to $274 million from $178 million over the same period. These EPS and revenue figures suggest an EPS and revenue growth of 61% and 54%, respectively. For reference, HealthEquity just reported fiscal Q1 2018 numbers.

Devenir, an investment solutions company for Health Savings Accounts (HSAs), released a survey, which showed HSAs have grown to an estimated $34.7 billion in assets and 18.2 million accounts for the period ending June 30, 2016. Even more, the popularity of HSAs has increased substantially over the past decade. As of 2014, 17.4 million people were enrolled in HDHP/HSA compared to a mere 3.2 million in 2006. These findings reinforce a consistent growth trend for health spending accounts and a shift toward the consumer taking control over their healthcare spending (Figure 3).

“We are seeing consistent growth in new HSA accounts at a growth rate in excess of 20 percent year over year and we expect that to continue for the next couple of years,” Jon Robb at Devenir.

Key findings from the Devenir 2016 HSA Survey include

• HSA assets surpass $34 billion threshold. The number of HSAs increased to 18.2 million. The value of the accounts exceeded $34.7 billion in assets, which represents a year-over-year increase of 22 percent for HSA assets and 25 percent for accounts for the period of June 30, 2015 to June 30, 2016.

• Health plans remain the largest driver of account growth. Health plan partnerships continued to be the primary driver of HSA growth, accounting for 37 percent of new accounts opened so far in 2016.

Devenir projects that, by the end of 2018, the HSA market will likely exceed $50 billion in HSA assets covering over 27 million accounts. As this market continues to grow double-digits through 2018, HealthEquity (HQY) is my pick to play this growth trend. 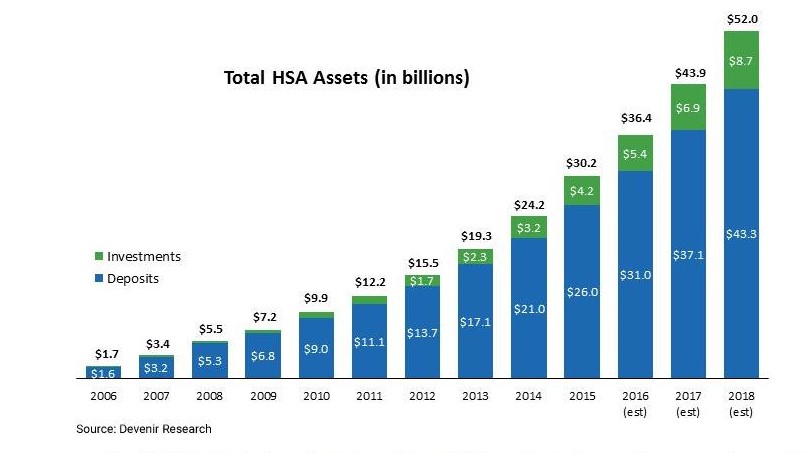 Traditionally, medical insurance is purchased via employers and premiums are deducted from paychecks in exchange for medical coverage. Health Savings Accounts (HSAs) are challenging this traditional paradigm by allowing the employee to channel the vast majority of these premiums into an HSA bank account. In exchange for holding onto these premiums, the employee must meet the deductible prior to the insurance plan kicking into full effect. I say full effect because the plan still benefits you with negotiated rates and prescription coverage. You pay the full negotiated price for medical bills up to the deductible amount prior to the full suite of benefits taking effect. Throughout the entire deductible process, the plan is working in your favor. This may be the best of both worlds where one keeps the premiums she was paying anyway while still having access to the identical medical plan.

More companies than ever are now offering High Deductible Health Plans (HDHPs) with a companion HSA option. More than two-thirds of companies with 1,000 employees or more are offering this HDHP/HSA option. In brief, an HDHP is a pre-tax medical plan that requires the employee to shoulder the cost of medical expenses out-of-pocket up front to a defined dollar amount to satisfy a deductible. Once this deductible is reached the traditional medical plan provides coverage. These plans may be a win-win for both the employer and employee over the long-term.

As of 2016, a qualified HDHP translates into a medical plan that has a minimum deductible of $1,300 for an individual and $2,600 for a family, which must be met prior to insurance benefits kicking in and providing coverage. HSAs offer many great advantages to address current medical needs while simultaneously providing the potential for long-term account accumulation. Leveraging the advantages the HSAs offer via pre-tax contributions, tax-free earnings from interest and investments and tax-free withdrawals for qualified medical expenses is just the beginning. There’s long-term potential in the fact that unused contributions roll over each year and are not subject to the "use it or lose it" rule. At age 65 withdrawals can be made penalty-free for non-medical reasons and in turn can have a very significant impact on retirement. At age 65, the HSA acts in a similar fashion as a traditional IRA and taxed at the individual's effective tax rate, thus over the long-term, HSAs can serve as an invaluable source of retirement income while simultaneously serving as a personalized long-term health care cost containment play.

HDHPs and the HSA Component

HDHPs include an HSA that allows employees to save tax-free money for current or future medical needs, even in retirement. Unlike a Flexible Spending Account (FSA), money contributed to an HSA rolls over year after year and is not subject to the "use it or lose it" rule that governs FSAs. The funds deposited by you and your employer into the HSA belong to you forever and are never relinquished under any circumstance except on the account holders' accord. These HSA funds are not limited to the cash deposits from each paycheck and thus, funds in excess of a balance threshold amount (typically $2,000 however, this is determined by your employer and the HSA provider) are eligible for investing in a variety of mutual funds and other investment products. For 2016, the contribution limits are set at $3,350 and $6,750 for individuals and families, respectively. These gross amounts are the total amounts deposited into the HSA account between yourself and the employer. Thus leveraging the HSA, one has the year after year potential to benefit from long-term account accumulation, interest and appreciation while saving for future medical needs and most notably retirement. The potential for long-term account accumulation using the money that normally would have been allocated towards traditional medical premiums and channeling these funds into an HSA instead presents a financially compelling case.

HealthEquity Inc. (NASDAQ:HQY) looks poised to continue to benefit from the ever-expanding and growing HSA space. HealthEquity has been riding this secular growth market since its IPO and looks to be continuing this performance as measured by its most recent quarterly results and subsequent stock appreciation. I feel that HealthEquity will continue to post strong grow as it services the double-digit HSA growth market and manages more assets and investments within these accounts while delivering more offerings to its clients. HSAs have seen consistent growth in new accounts at a growth rate in excess of 20 percent year-over-year and that’s expected to continue for the next couple of years.

Utilizing funds normally reserved for paying medical premiums can be earmarked to an HSA to augment long-term retirement goals and contain long-term health care costs. These funds can be withdrawn at age 65 without penalty for non-medical reasons at the individual's effective tax rate. This could potentially serve as a dual purpose; 1) additional retirement income and 2) the flexibility to content with current and future medical costs. Taken together, the advantages to having an HSA have been catching on and giving rise to a double-digit growth market.