The Long-Term Vision – Growth and Direct to Consumer Offerings

The Walt Disney Company (NYSE:DIS) reported an information dense earnings report that included mixed numbers (as comparable numbers from the previous year were banner numbers), its vision for the future via streaming while cutting off Netflix (NFLX) in the process. As always, a conspicuous ESPN remained at the forefront of investors’ minds, serving as the root cause of this streaming initiative as profits and revenue from the Media Networks division have stalled out over the past few years. Simply put, Disney is going all-in on a Disney branded streaming service come 2019, more on that later. As investors digest the earnings report and fixate on the eroding Media Networks division, I think Disney is offering a long-term buying opportunity near ~$100 per share. Although ESPN makes up a disproportionate amount of the company’s revenue and income, all of its other franchises are posting robust growth hence Disney will be relying less on its ESPN franchise over the coming years. It’s noteworthy to highlight (when comparing year-end fiscal numbers) that in 2011 its Media Networks segment made up 70% of Disney’s income. That percentage has decreased to 49% at the end of 2016. It curtailed its Media Networks contribution to the company's income by 30% since 2011. Disney’s perpetual stock slump and roller coaster ride over the last two years has almost entirely been attributable to the decrease in ESPN subscribers and subsequent revenue slowdown. I feel too much of an emphasis is being placed on ESPN as it weighs less on overall profits. Disney is evolving to address this deteriorating business segment with initiatives put forth previously and doubling down during its recent conference call. Disney offers a compelling long-term investment opportunity considering the growth, pipeline, Media Networks remediation plan, diversity of its portfolio, share repurchase program and dividend growth.

“Today we announced a strategic shift in the way we distribute our content. The media landscape is increasingly defined by direct relationships between content creators and consumers, and our control of BAMTech’s full array of innovative technology will give us the power to forge those connections, along with the flexibility to quickly adapt to shifts in the market,” “This acquisition and the launch of our direct-to-consumer services mark an entirely new growth strategy for the Company, one that takes advantage of the incredible opportunity that changing technology provides us to leverage the strength of our great brands.”

Overall, Q3 results were negative across the board with the exception of the Parks and Resorts segment posting robust growth. The growth in Parks and Resorts offset declines in its other business as revenue was flat quarter-over-quarter and over the comparable previous 9-month period albeit free cash flow increased over the same periods, respectively. Growth was arrested and declined in the Studio Entertainment and Consumer Products & Interactive Media due to comparable banner periods in FY2016 as the movie slate produced banner numbers during this period in FY2016. Noteworthy movie releases in Q3 FY2017 included Guardians of the Galaxy Vol. 2 ($862 million), Pirates of the Caribbean: Dead Men Tell No Tales ($786 million) and Cars 3 ($300 million). This slate was compared to Q3 FY2017 releases of Captain America: Civil War ($1,153 million), The Jungle Book ($967 million), Finding Dory ($1,029 million) and Alice Through the Looking Glass ($300 million). Comparing the aggregate worldwide gross from the movies released in Q3 FY2017 versus Q3 FY2016, it stands at $1.95 billion and $3.450 billion. These numbers explain the negative numbers in Studio Entertainment and Consumer Products & Interactive Media segments due to the comparable banner period (Figures 1 and 2).

The Walt Disney Company (NYSE:DIS) has a larger movie slate in FY2018 starting in calendar Q4 of 2017 which includes Thor: Ragnarok, Coco, Star Wars: The Last Jedi and then in calendar 2018 the highly anticipated Blank Panther movie is being released in February, the next Avengers movie and another Star Wars in May, The Incredibles 2 in June and Ant-Man and the Wasp in July of 2018. With the aforementioned movie release slate coming in FY2018, growth will likely return and accelerate in the Studio Entertainment and Consumer Products & Interactive Media businesses. 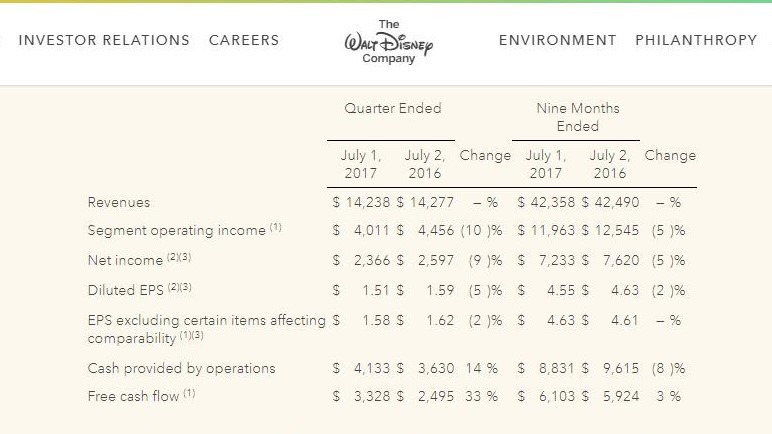 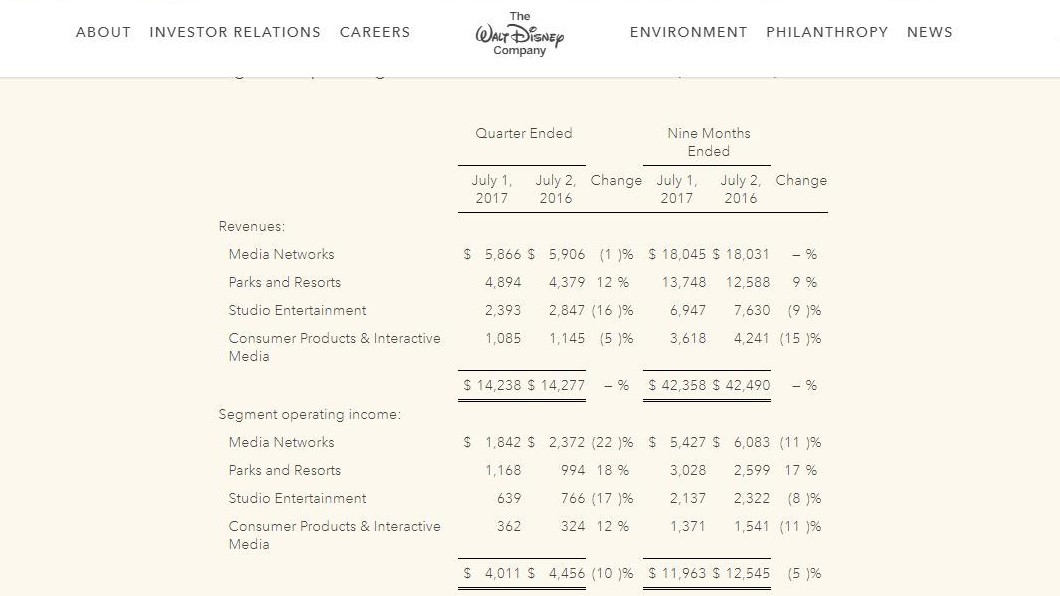 Disney recently announced that its ESPN segment terminated ~100 employees to reflect the changing media environment. The result will be focused on a digital presence, and per ESPN president, John Skipper changes in ESPN content must “go further, faster… And as always, must be efficient and nimble”. As the consumption of media continues to change, Disney is trying to contend with this migration away from traditional media to embrace social and streaming. Disney has initiated corrective actions regarding the ESPN declines. Disney recently announced a deal with Hulu for live-TV streaming which will include ESPN live and other Disney/ABC features (Disney owns a 33% stake in Hulu). Vice and Disney also set a production deal with ESPN that will see programming shared between the two companies. Disney is the largest stakeholder in Vice after putting $400 million into the company in addition to the piece it holds through its stake in A&E Networks.

Disney previously announced that it purchased a 33% stake in BAMTech. This is intended to accelerate growth in direct-to-consumer video streaming. This will be a new ESPN-branded multi-sport direct-to-consumer service. Disney said that BAMTech would work with ESPN to launch a direct-to-consumer, subscription streaming service, featuring live sporting events at the regional, national and international levels. During the annual investors meeting, Bob Iger stated that an ESPN direct-to-consumer offering would launch by the end of the year in 2017. In the first year, Iger stated, it will have an additional 10,000 live sporting events over and above what's available on ESPN's linear networks. This quarter Disney went further and announced it would take majority control of BAMTech for $1.58 billion for an additional 42% stake from MLB Advanced Media, adding to its 33% stake for a total of 75% ownership. ESPN’s decline has slowed and perhaps will reach an inflection point where other initiatives will begin to bear fruit and declines will be fully arrested. Once the ESPN declines are fully arrested, and initiatives come to fruition, I feel that these shares will have more upside.

Along with Disney launching an ESPN-branded multi-sport streaming service early next year, Disney announced it would also launch a Disney-branded direct-to-consumer service in 2019 and pull its movies from Netflix in the process. Disney said it intends to remove all of its movies from Netflix and instead plans to launch its streaming service starting in the U.S. and then expanding internationally. Disney opted to exercise an option to migrate its content off the Netflix platform. Movies to be removed include Disney and Pixar titles, according to Iger. Netflix said that Disney movies would be available through the end of 2018 on its platform while Marvel TV shows will remain. The new platform will be the home for all Disney movies going forward, starting with the 2019 theatrical slate which includes "Toy Story 4," "Frozen 2," and the upcoming live-action "The Lion King." It will also be making a "significant investment" in exclusive movies and television series for the new platform.

Disney is now able to leverage ancillary Marvel characters that it doesn’t own after Marvel had to piece meal its properties due to financial distress. Disney owns rights to the vast majority of Marvel characters however when it comes to Spider-Man, a new agreement between Sony and Disney provides a mutually beneficial scenario. Spider-Man was first introduced alongside the Avengers in Captain America: Civil War in 2016 and is co-starring with Tony Stark/Iron Man in Spider-Man: Homecoming. An agreement between Disney's Marvel and Sony states that Disney's Marvel can include Spider-Man in Captain America: Civil War and future properties. Both studios will keep their box office returns for any Spider-Man related revenue (e.g., Disney for Captain America: Civil War and Sony for Spider-Man: Homecoming – with box-office milestone payments to Disney for stepping in and rewriting the reboot). It's noteworthy to highlight that Disney owns the merchandising rights to the Spider-Man character as well. Disney acquired the character rights in 2011 and thus could be a long term reoccurring revenue stream for Disney as the Spider-Man franchise is rebooted. This could be a major tailwind now that Spider-Man can be included in spinoffs with Avengers and other Marvel characters with no royalty costs. This will be exciting to see this unfold and how Marvel will layer in Spider-Man to its advantage over the next few years in the cinema. Spider-Man: Homecoming has taken in $706 million worldwide. This franchise could bode well for Consumer Products & Interactive Media segment.

The Media Networks segment will continue to generate huge cash flows despite a slowdown in growth. A 30% reduction in income reliance on this segment will allow Disney to unburden itself from this ESPN overhang. The ESPN fixation presents a buying opportunity in light of the recent sell-off. Disney is doing its best to place ESPN on the right footing and into the future with major growth initiatives from BAMTech to the imminent release of it direct-to-consumer ESPN and Disney offerings while abandoning the Netflix relationship. Disney’s diverse and growing portfolio lessens its dependence on ESPN moving into the future and illustrates the company's resiliency. Once the ESPN initiatives begin to show results (via BAMTech and direct-to-consumer offerings) in a backdrop of all its other franchises continuing to post record numbers, shares will likely move to the upside again. Disney continues to deliver EPS and revenue growth despite the ESPN franchise slowing. With its most robust movie slate coming in FY2018 and FY2019 in combination with growth catalysts in Media Networks segment, the long term picture remains well intact through 2020. Thus I feel that The Walt Disney Company (NYSE:DIS) makes a compelling long term investment.