I highlighted HealthEquity Inc. (NASDAQ:HQY) earlier this year as a great growth play in the ever-expanding Health Savings Accounts (HSAs) space. HealthEquity just reported big beats on both the top and bottom line, posting 28.8% year-over-year growth in revenue. HealthEquity’s IPO was in 2014, and since then the stock has returned 160% moving from ~$17 to currently ~$43 and touching $55 earlier this year. HealthEquity has been riding this secular growth market since its IPO and based on its recent string of earnings; the company is continuing this performance. Over the four quarters including the most recent earnings announcement, HealthEquity has beaten on both EPS and revenue while posting double-digit growth. HealthEquity posted annual revenue growth of 44% when comparing FY2016 to FY2017. The company has already posted robust revenue growth of 56% when comparing 1H2017 to 1H2018 (Figure 1). The sustainability of this growth will likely move in lock-step with the growth in the HSA market while optimizing revenues extracted from the investments within these accounts via offering investment advising, collecting fees from the investment line-up and its newly announced 401k with paired HSA offerings. I feel that HealthEquity will continue to post strong growth as it services the double-digit HSA growth market and manages more assets and investments within these accounts. As HealthEquity rolls out additional products such as the launch of its own 401k offerings paired with HSA accounts, revenue will continue to accelerate. 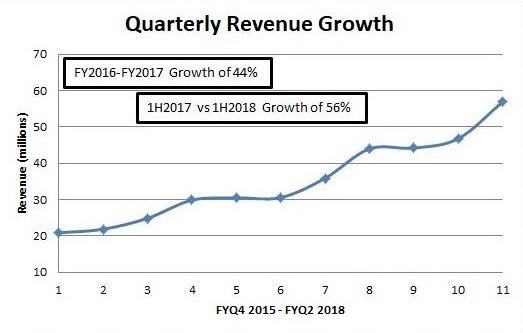 HealthEquity reported another great quarter and the stock responded by appreciating by 12% after opening the next morning, jumping from $42 to $47. HealthEquity reported EPS of $0.21 and revenue of $56.9 million compared to last quarter with EPS of $0.23 and revenue of $55.4 million. These EPS and revenue figures beat estimates by $0.06 per share and $1.24 million with the latter revenue figure posting 28.8% year-over-year growth. 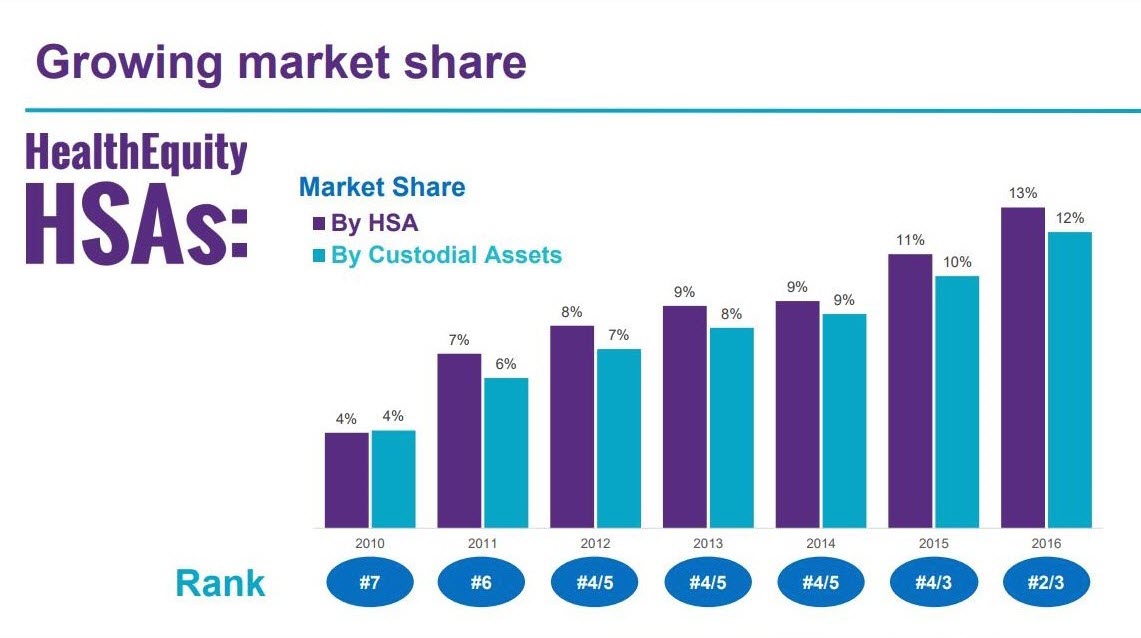 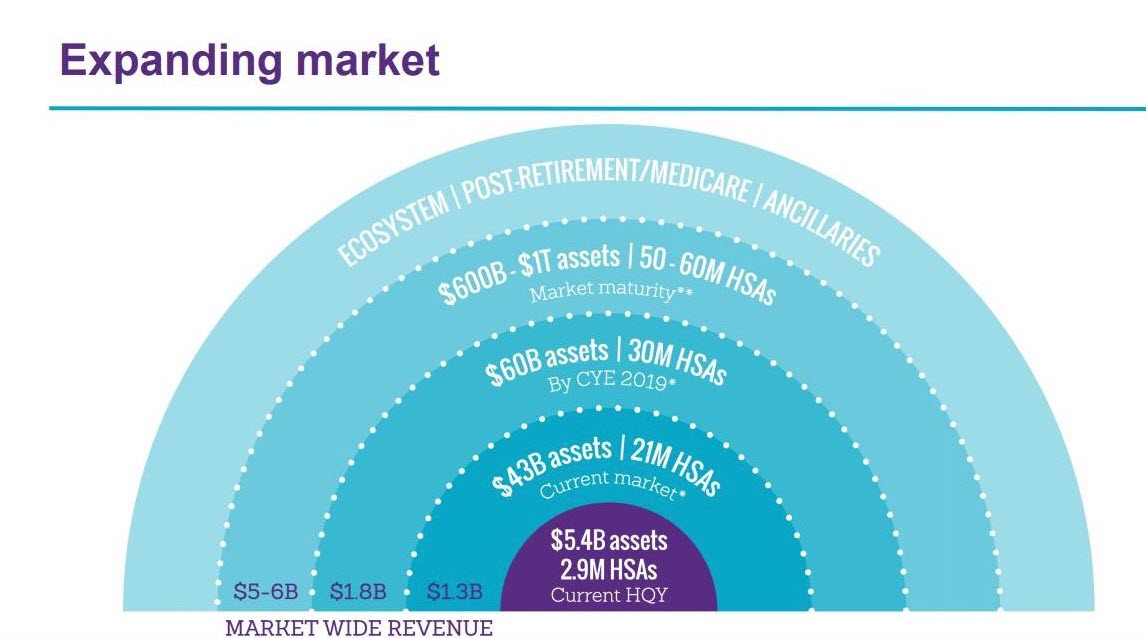 Figure 3 – Potential market potential over the next few years

Devenir, an investment solutions company for Health Savings Accounts (HSAs), released a survey, which showed HSAs have grown to an estimated $34.7 billion in assets and 18.2 million accounts for the period ending June 30, 2016. Even more, the popularity of HSAs has increased substantially over the past decade. As of 2014, 17.4 million people were enrolled in HDHP/HSA compared to a mere 3.2 million in 2006. These findings reinforce a consistent growth trend for health spending accounts and a shift toward the consumer taking control over their healthcare spending (Figure 4).

“We are seeing consistent growth in new HSA accounts at a growth rate more than 20 percent year over year, and we expect that to continue for the next couple of years,” Jon Robb at Devenir.

Key findings from the Devenir 2016 HSA Survey include

Devenir projects that, by the end of 2018, the HSA market will likely exceed $50 billion in HSA assets covering over 27 million accounts. As this market continues to grow double-digits through 2018, HQY is my pick to play this growth trend. 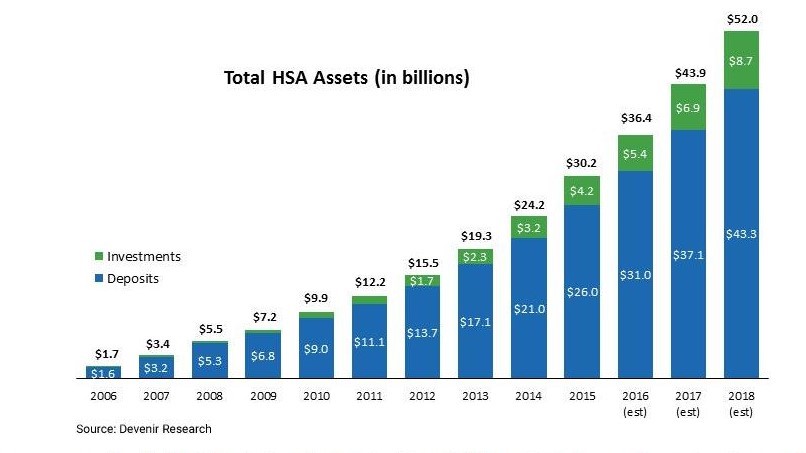 HealthEquity is posting accelerating revenue, cash flow, and income growth, growing at 103%, 204%, and 184%, respectively from FY2015 through FY2017. These growth numbers have continued the uptrend with the first two quarters of FY2018 reported. HealthEquity has been growing market share with plenty of market expansion ahead of itself. It’s projected that by 2019 there could be $60 billion in assets and 30 million HSA accounts in the market. Currently, HealthEquity only manages $5.4 billion in assets and 2.9 million HSA accounts. The growth runway is vast for HealthEquity with an ever-expanding market over the coming years.

I feel that HealthEquity Inc. (NASDAQ:HQY) will continue to post strong growth as it services the double-digit HSA growth market and manages more assets and investments within these accounts while delivering more offerings to its clients.

Disclosure: The author currently holds shares of HQY and is long HQY. The author also has a covered put at a $50 strike with an expiration of 15DEC17 for $7.44 per share in premium income. The author has no business relationship with any companies mentioned in this article. He is not a professional financial advisor or tax professional. This article reflects his own opinions. This article is not intended to be a recommendation to buy or sell any stock or ETF mentioned. Kiedrowski is an individual investor who analyzes investment strategies and disseminates analyses. Kiedrowski encourages all investors to conduct their own research and due diligence prior to investing. Please feel free to comment and provide feedback, the author values all responses. The author is the founder of stockoptionsdad.com a venue created to share investing ideas and strategies with an emphasis on options trading.