This summer investors have witnessed firsthand how political policy changes can affect commodity and equity prices. In July both France and the United Kingdom announced it would ban the sale of diesel and gasoline powered cars by the year 2040. Other countries like Norway and India have set goals of even earlier dates to no longer have oil based vehicles sold by 2025 and 2030.
India had even taken it one step further and announced that not only will gasoline vehicles not be sold after 2030, but all gasoline vehicles will need to be replaced with electric and battery powered vehicles by that year.

The Netherlands wants to switch to electric vehicles by 2025 while Germany intends to make the change by 2030, but neither has set these plans in written law. But, the most notable announcement comes from China, a country that has over 300 million registered vehicles. Chinese authorities have not yet set a deadline for the end of sales of internal-combustion vehicles, but they have made it clear that they are working on a timetable.

While the U.S. and some of the other leading countries around the world have yet to come out and formally announce a date of when internal combustion engines will no longer be allowed, many believe there will come a day that all first world countries have such a ban.

So from an investing perspective, cashing in on this opportunity is simply just buying investments today and waiting.

The most obvious play may be to buy the car manufacturers themselves. The thinking would be that since electric vehicles will be required, the manufacturers will be able to charge a premium for these vehicles. But that is unlikely due to government regulations on pricing and such. Plus, it would be difficult to accurately predict which car companies will be the big winners in the electric game.

When thinking about a revolution, I always go back to the story of the 49ers and those who settled the American West. While everyone wanted to be the guy who struck it rich and found that huge piece of gold, the real winners of the gold rush were those who sold the prospectors their gear. The guys who sold the shovels, picks, tents, and food were the ones who hit it big from the gold rush, not the actual men digging.

With that same thinking in mind, the more profitable way to play the electric vehicle revolution would be buying the companies who sell the specific materials needed to make electric vehicles. When it comes to electric vehicles, one of the most important raw material input is the lithium for the batteries.

Buying the Global X Lithium & Battery Tech ETF (LIT) would be a great place to start investing. This ETF will give you direct exposure to both the lithium miners and the companies who make lithium batteries. The ETF was launched in 2010, has nearly $500 million in assets under management (a figure that will likely grow in the future), has an expense ratio of 0.76% (which is rather high), but also pays out a 1.42% dividend yield. Currently LIT holds 27 different positions which have a weighted average market cap of $12.14 billion. 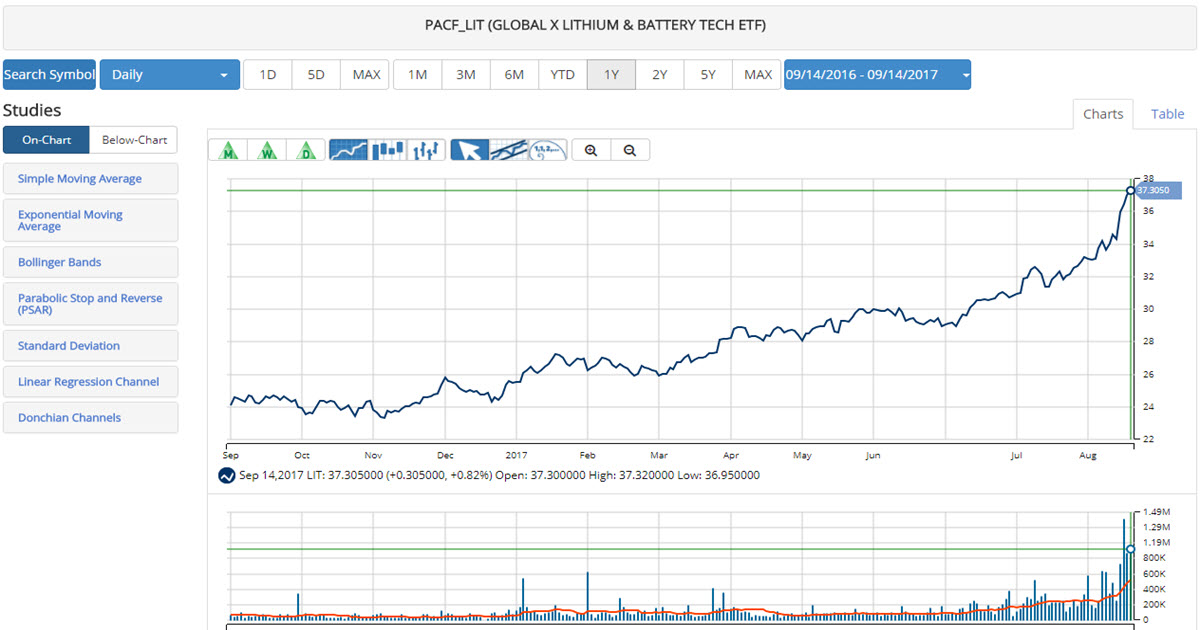 Year-to-date the fund is up 51.8% while being up 17.9% over the last month and 23% over the last three months. With that kind of performance and the recent announcements from different governments about the internal combustion bans, you may want to build your position in thirds in case the fund cools off a little in the coming months.

Another option would be buying iShares MSCI Global Metals & Mining Producers ETF (PICK) or the VanEck Vectors Rare Earth/Strategic Metals ETF (REMX). While lithium is the most abundant rare metal needed for electric vehicles, there are other metals also required at this time. Both of these ETF's will give you exposure to lithium miners, but also to other metal miners around the world.

Year-to-date REMX is up 53% after climbing 52% in the last three months and 23% in the last month. PICK has not performed quite as well but is still up 40% year-to-date, 20% over the previous three months and 7.8% over the last 30 days. While PICK offers exposure to more than just rare metals, it does have its downside due to its exposure to coal. Investors looking to find an electric vehicle specific investment may want to lean more towards REMX and LIT.

Disclosure: This contributor did not own shares of any equity mentioned above at the time this blog post was published. This article is the opinion of the contributor themselves. The above is a matter of opinion provided for general information purposes only and is not intended as investment advice. This contributor is not receiving compensation (other than from INO.com) for their opinion.