OPEC had reported that stocks stood at 2.985 billion at end-December when the deals went into effect. Therefore, stocks have only dropped 1 million (2.985 minus 2.984), not 178 million.

Because global demand is going into a seasonal decline, stocks will likely end only modestly lower at end-2017 after a year of the deals. Saudi energy minister al-Falih first said he expected global stocks to reach the five-year average by June. At the May OPEC meeting, he said that the current production quotas will "do the trick" of rebalancing stocks to normal levels within six months. 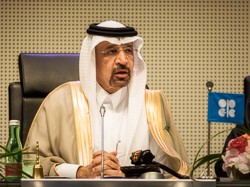 HE Khalid A. Al-Falih, Saudi Arabia's Minister of Energy, Industry and Mineral Resources, and President of the OPEC Conference. Source: OPEC

OPEC had decided to extend the production cuts through March of 2018, recognizing the seasonal drop in demand in the first quarter of the year, during which global inventories can be expected to build. The Russian energy minister had indicated that he would wait until March before determining whether Russia would like to extend the cuts for a longer period of time.

I am expecting that global inventories will be higher during the first quarter of 2018 than they were at the end of 2016 when the cuts began. Furthermore, according to several sources, U.S. production is expected to be rising.

Ian Taylor, CEO of Vitol Group, the world’s largest oil trader, sees the price of the Brent barrel falling almost $14 to $45 in 2018. “I think there’s a chance oil could fall closer to $40 than $50, because I think there’s still one more big surge coming from U.S., which will knock prices down,” he said.

Total SA agrees that a surge in US oil production is on the horizon due to the increased hedging that shale producers are undertaking. “We will see another wave of investment in U.S. shale, no doubt about it,” Patrick Pouyanne, chief executive of French Total, said at a conference in London.

According to Jamaal Dardar of investment bank Tudor, Pickering, Holt & Co (TPH), “There is definitely going to be a pretty large surge in production next year.” U.S. shale producers have hedged one-third of 2018’s oil production at roughly $52 per barrel. TPH is predicting U.S. oil production will reach 10.2 million barrels per day in 2018, higher than the 9.92 that the EIA expects.

Last March, Mr. al-Falih had made it clear that the production cuts were designed as a short-term tool, not a long-term strategy.

If U.S. production continues to rise and global stocks are higher next March than they were at the start of the deals, the decision to continue the deals could be quite difficult, especially as the U.S. captures a greater market share in Asia. In effect, The Saudis and Russians would just be ceding market share without accomplishing their goal.

In the alternative, if they end the deals, a “slug of oil” (using Al-Falih’s phase) would come on the market, torpedoing prices in the short-run. But once North American hedges run-out, shale production would eventually drop, and the elusive rebalancing would finally take place.

One thought on “OPEC's Fake Results and Upcoming Quagmire”