One year has passed since President Donald Trump was elected to office. That month I wrote a post about copper’s ultimate monthly performance compared to other commodities thanks to the new president’s promises of huge infrastructure rebuilding.

Below is a 1-year performance chart of copper to see how the metal has been doing since Election Day.

Cooper gained a hefty 25% for the period with a peak of around 33% that it hit last month. In the post-election months copper exploded to the upside, but then the euphoria in the market was changed with profit taking erasing earlier gains.

We can see price spikes in February when President Trump said: “We’re going to start spending on infrastructure. Big.” and June when the so-called “Infrastructure Week” was held. But the major Bull run started later and continued until September when President Trump reversed his course on public-private partnerships (PPP, P3), telling the Democratic members of the House Ways and Means Committee that a public-private approach wouldn’t work. It sent a confusing signal to infrastructure investors. The metal lost almost 10% on that news.

Then, we saw another robust move to the upside beyond the previous top, which hit the $3.26 mark (33% gain). We know that right about the same time there was an awful disaster, Hurricane Maria broke Puerto Rico, where 3.4 million U.S. citizens live. The almost total blackout caused by an old electricity grid had been severely damaged. The recovery would require significant infrastructure spending and this news could push an immediate price growth of the metal. Until now, copper already lost half of that gain on profit-taking.

Hopes feed the market, but it looks like President Trump is not driving the market anymore as his attempt to make things quickly failed. He could have another chance when the situation will require urgent actions as in the case of Puerto Rico, which proves the old saying - don't wait for the flood to start building your ark.

Top Buyer From The East Cools Down

In May and August I showed you how vital Chinese economic data is to the copper market. So, I would like to show you the copper chart for the same 1-year period described above but compared to the Chinese GDP Growth Rate for augmented reality. 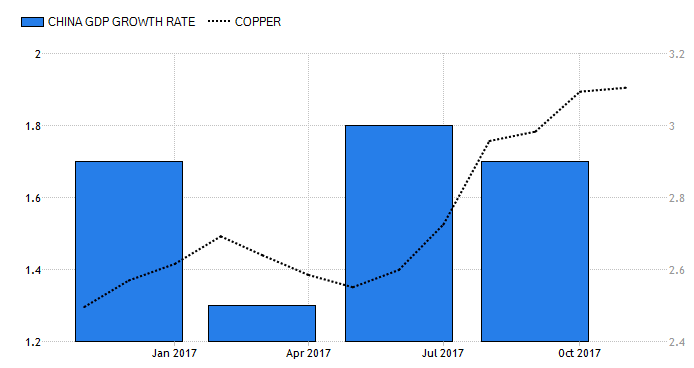 China has had a volatile year with its GDP data. It started the period with a 1.7% growth quarter-on-quarter, and copper also showed the rise. Then the metal dropped amid the slowest reading on record in Chinese GDP growth at 1.3% quarter-on-quarter. It’s amazing how copper followed the huge growth of the data in the second quarter to 1.8% quarter-on-quarter. And in the last period, we got a small slowdown, which didn’t take such a strong effect on the metal yet as it is still traded above the $3 mark.

This year the Chinese GDP growth rate year-on-year is projected at the 6.5% and to be the weakest in the past 26 years amid a cooling economy, which is supported by the constant government liquidity injection. The “soft” landing plan is in action. This is not good news for copper.

I would like to finish the post with the last chart, which has a warning signal for the metal. In May on top of Chinese economic data correlation I also shared a chart with an amazing mutual relationship between the copper and the Australian dollar (nicknamed Aussie, Ozzie by currency traders).

This couple moved hand in hand for the most of the period with some extreme moves in the Aussie graph (blue). Copper line (red) is smoother. I highlighted the gaps between these two instruments with black up and down arrows. Starting from July, the currency took off to the sky in a bullish manner as the graph line had a very sharp angle. Copper couldn’t repeat the same rocket move, and it just climbed much slower to the upside with a less sharp angle. It ended up in the huge time gap between the peaks of these instruments as highlighted in the black curved arrows. So, the Aussie hit the tops earlier for 1-2 months than copper.

After reaching the peak, the Australian currency started to drop in the same wild manner, breaking below the starting point for the period. This is a warning alert for the copper as we already witnessed that it could take 1-2 months for the metal to follow its Australian twin. And this time bomb should have been exploded already as Aussie peaked two months ago in September. The dropping point is located in the area of $2.8.

In my earlier post published this past September I warned you about the possible massive drop in the metal’s price ahead.

Today we have Trump’s failure to ignite the infrastructure renovation, Chinese economy slowing down and Australian dollar weakness. We see more evidence for the possible upcoming weakness in the copper market. It is sad to say that only natural disasters could keep the metal’s price afloat as it requires infrastructure restoring. I believe this is not the way we should plan and live.

One thought on “Copper Update: 1-Year After The Election Of Donald Trump”