Russia’s continued participation seems to be a linchpin, and the Russian energy minister, Alexander Novak, reportedly met with Russian oil producers about their view of extending the production deal. According to TASS, everyone but Gazprom Neft agreed to a six-month extension, not the nine-month extension favored by Mr. Al-Falih. Gazprom Neft expects to launch new projects in 2018.

Since early August, the North American rig count had been dropping until a couple of weeks ago. The rebound in oil prices, which commenced in late June, may finally have just begun to reverse the downtrend. 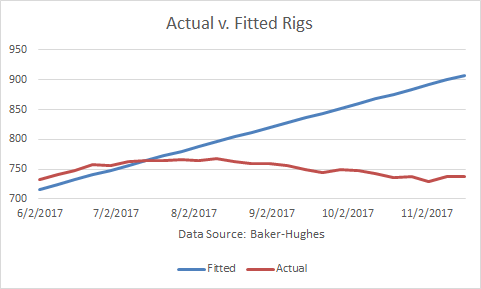 In addition, oil producer hedges had peaked in February. They are low enough to provide scope for a 100 million barrels of hedge sales if producers expect prices have peaked for this cycle. 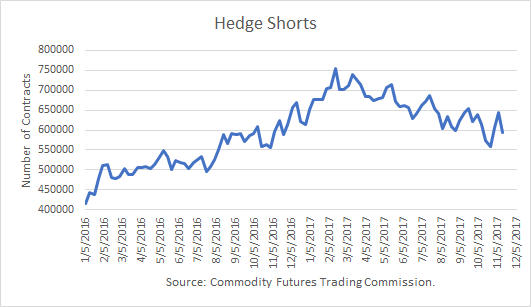 Also, speculative short positions have dropped down the lower end of their range. They are now positioned for a major rebound (selling) when the timing is right. 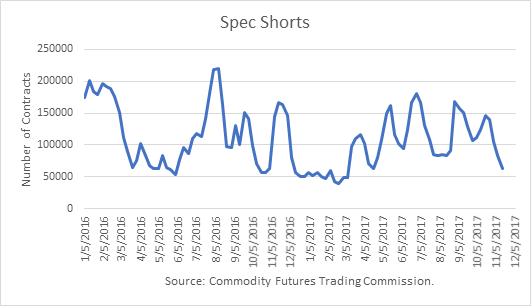 Finally, hedge spec longs have risen to a precariously high level. Such a crowded trade risks a major reversal as it did last February and March. 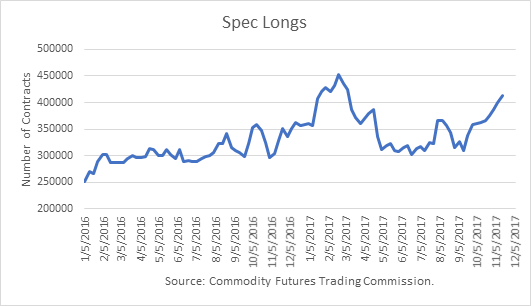 Mr. al-Falih was quoted saying, “I certainly don’t spend time looking at hedge funds and the flows into financial investment instruments.” That probably means he is concerned with trader positioning but does not want to admit it.

The market rose following the White House guidance in early October that President Trump would not re-certify Iran as in compliance with the nuclear deal. It effectively added a geopolitical risk premium.

U.S. inventories had also been dropping as a function of the hurricane effects on refineries and then Gulf of Mexico production. In addition, U.S. exports of crude and products reached record highs.

The market appears to be treading water ahead of the OPEC meeting on November 30th. The most likely outcome, given the posturing, seems to be an agreement to extend the deals for an additional six months until the ending of September.

The group is likely to report that the decision of whether to continue through all of 2018 will be made at the next OPEC meeting in May. At that time, they will decide with to extend the cuts, or “taper” increases at a rate the market can absorb without flooding inventories once again.

The Iran certification issue will come to a head in December or January. Its resolution will provide a new catalyst, one way or the other. I do not expect an armed conflict.

The seasonal stock build expected in January will also provide direction to prices. If it becomes clear that the glut was not reduced during 2017, as DOE projects, I would expect a strong sell-off once again, as occurred in 1Q2017.

One thought on “Oil Market Waiting For A Catalyst”