The Walt Disney Company (NYSE:DIS) just reported its full-year FY2017 numbers with its Q4 numbers falling short of analysts’ estimates, missing on both EPS and revenue coming in at $1.07 (missing by $0.08) and $12.78 billion (missing by $560 million), respectively. On an annual basis, EPS marginally decreased to $5.69 for FY2017 from $5.72 for FY2016. All financial metrics insignificantly decreased year-over-year with a slight increase in free cash flow. All operating segments insignificantly decreased year-over-year as well. However, Parks and Resorts were a bright spot for FY2017. Now with FY2017 in the books, FY2018 is off to a great start with strongholds in streaming (Hulu, BAMTech, Sling offerings), future inroads into other streaming initiatives with a Disney branded service to directly compete with Netflix (NFLX) and an ESPN streaming offering slated for release in 2018 and finally a record-breaking movie release with Thor: Ragnarok already surpassing $212 million domestically and $650 million worldwide on its way to possibly breaking the prestigious 1 billion dollar mark only after two weeks in release. I feel too much of an emphasis is being placed on ESPN as it weighs less on overall profits. Disney is evolving to address the deteriorating Media Networks business segment with initiatives put forth previously and doubling down during its recent conference call. Investors appear to be looking past this ESPN issue finally as seen in the price action of Disney stock after releasing a lukewarm earnings announcement. Disney has one of its biggest movie slates for FY2018 and a potential acquisition of 21st Century Fox’s assets to further drive growth. Disney offers a compelling long-term investment opportunity considering the growth, pipeline, Media Networks remediation plan, diversity of its portfolio, share repurchase program and dividend growth.

ESPN remained at the forefront of investors’ minds, serving as the root cause of this streaming initiative as profits and revenue from the Media Networks division have stalled out over the past few years. Simply put, Disney is going all-in on a Disney branded streaming service come 2019. As investors digest the earnings report and fixate on the eroding Media Networks division, I think Disney is offering a long-term buying opportunity near ~$100 per share. This has been seen by the price movement in Disney stock post-earnings which saw a ~3% move to the upside despite the disappointing earnings announcement. Although ESPN makes up a disproportionate amount of the company’s revenue and income, all of its other franchises are posting robust growth hence Disney will be relying less on its ESPN franchise over the coming years. Disney’s perpetual stock slump and the roller coaster ride over the last two years has almost entirely been attributable to the decrease in ESPN subscribers and subsequent revenue slowdown at its Media Networks division.

Not only does Disney have its streaming strategy in place, but it also announced another trilogy of Star Wars films. Bob Iger revealed plans to roll out the ESPN Plus streaming service in the spring of 2018 and suggested the company might pursue early uptake of 2019's Disney-branded streaming service by pricing it "substantially" cheaper than Netflix. The company's making the right steps with its plans to target evolving media consumers with the two streaming services, JPMorgan's Alexia Quadrani says. The next two fiscal years look good for the film slate as well, she notes, with a pair of Star Wars canon films yet ahead, and another trilogy on the way along with stand-alone films like Solo.

Disney said it intends to remove all of its movies from Netflix and instead plans to launch its own streaming service starting in the U.S. and then expanding internationally. Disney opted to exercise an option to migrate its content off the Netflix platform. Movies to be removed include Disney and Pixar titles, according to Iger. Netflix said that Disney movies would be available through the end of 2018 on its platform while Marvel TV shows will remain. The new platform will be the home for all Disney movies going forward, starting with the 2019 theatrical slate which includes "Toy Story 4," "Frozen 2," and the upcoming live-action "The Lion King." It will also be making a "significant investment" in exclusive movies and television series for the new platform.

ESPN's upcoming streaming service will be called ESPN Plus which will launch in the spring of 2018 with a fully redesigned app and offer scores and highlights along with authenticated streaming of channels for cable subscribers, and the ability for all to subscribe to live events. As for the general Disney-content direct-to-consumer offering, it's coming in the latter part of 2019, Iger says, and will include content from Disney's four major brands (Disney, Pixar, Star Wars/Lucasfilm and Marvel). It will have 4-5 exclusive feature films per year as well; he says, as well as original series: Already in development is a Star Wars live-action series, as well as other series based on its Monsters film and High School Musical series.

Per CNBC, 21st Century Fox has been holding talks to sell most of the company to Disney, however, would not purchase all of Fox. Disney would have the opportunity to take control of the movie studio and significant TV production assets and exposure to international markets through Fox’s networks via a 39 percent ownership of Sky. The company could not own two broadcast networks and would therefore not buy the Fox broadcast network. It would not buy Fox's sports programming assets in the belief that combining them with ESPN could be seen as anti-competitive from an antitrust standpoint and it would not buy the Fox News or Business channel. Disney would also not purchase Fox's local broadcasting affiliates, according to people familiar with the negotiations. In addition to the movie studio, TV production and international assets such as Star and Sky, Disney would also add entertainment networks such as FX and National Geographic. Although this deal may not materialize, Disney may be very eager for merger and acquisitions to drive growth.

Overall, Q4 results were negative across the board with the exception of the Parks and Resorts segment posting robust growth once again to round out FY2017. The growth in Parks and Resorts offset declines in its other business as revenue was flat quarter-over-quarter and over the comparable previous 12-month period albeit free cash flow increased over the same periods, respectively. Growth was arrested and declined in the Studio Entertainment and Consumer Products & Interactive Media due to comparable banner periods in FY2016 as the movie slate produced banner numbers during this period in FY2016. These numbers explain the negative numbers in Studio Entertainment and Consumer Products & Interactive Media segments due to the comparable banner period.

The Walt Disney Company (NYSE:DIS) has a larger movie slate in FY2018 starting in calendar Q4 of 2017 which includes Thor: Ragnarok (already grossed $650 million worldwide after two weeks in release), Coco, Star Wars: The Last Jedi and then in calendar 2018 the highly anticipated Black Panther movie is being released in February, the next Avengers movie and another Star Wars in May, The Incredibles 2 in June and Ant-Man and the Wasp in July of 2018. With the movie above release slate coming in FY2018, growth will likely return and accelerate in the Studio Entertainment and Consumer Products & Interactive Media businesses. 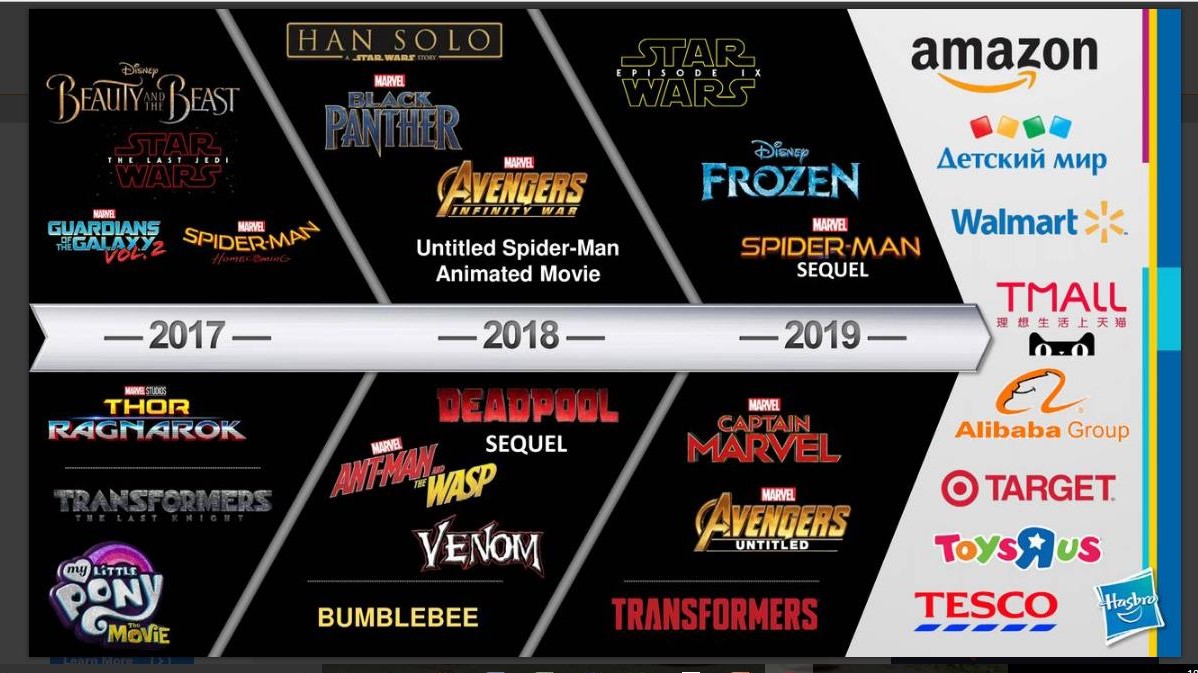 Disney seems very confident in its abilities to navigate through these tough times as media consumption habits evolve.

“Today we announced a strategic shift in the way we distribute our content. The media landscape is increasingly defined by direct relationships between content creators and consumers, and our control of BAMTech’s full array of innovative technology will give us the power to forge those connections, along with the flexibility to quickly adapt to shifts in the market,” “This acquisition and the launch of our direct-to-consumer services mark an entirely new growth strategy for the Company, one that takes advantage of the incredible opportunity that changing technology provides us to leverage the strength of our great brands.”

During the Q4 earnings announcement

“No other entertainment company is better equipped to navigate the ever-evolving media landscape, thanks to our unparalleled collection of brands and franchises and our ability to leverage IP across our entire company,” “We look forward to launching our first direct-to-consumer streaming service in the new year, and we will continue to invest for the future and take the smart risks required to deliver shareholder value.”

Based on all the initiatives put forth by Disney thus far and discussed in detail throughout this article, I agree and remain long Disney.

Now with FY2017 in the books, FY2018 is off to a great start with strongholds in streaming (Hulu, BAMTech, Sling offerings), future inroads into other streaming initiatives with a Disney branded service to directly compete with Netflix (NFLX) and an ESPN streaming offering slated for release in 2018 and finally a record-breaking movie release with Thor: Ragnarok which may break the prestigious 1 billion dollar mark. I feel too much of an emphasis is being placed on ESPN as it weighs less on overall profits. Disney is evolving to address the deteriorating Media Networks business segment with initiatives put forth previously and doubling down during its recent conference call. Investors appear to be looking past this ESPN issue finally as seen in the price action of Disney stock after releasing a lukewarm earnings announcement. Disney has one of its biggest movie slates for FY2018 and a potential acquisition of 21st Century Fox’s assets to further drive growth. The Walt Disney Company (NYSE:DIS) offers a compelling long-term investment opportunity considering the growth, pipeline, Media Networks remediation plan, diversity of its portfolio, share repurchase program and dividend growth.