In May I recommended that gold bugs think about buying stocks for gold to enjoy the bullish momentum on the market. This call paid well as S&P 500 index almost gained 6 grams of gold (10%) since then.

In terms of dollars, the index did even better by hitting the projected target of $2650 set in the May chart. Back in those days the S&P 500 was flirting with the $2400 mark, and the target level looked so distant then.

In this post, I will update the S&P 500/Gold ratio chart and see if there is more room to the upside. 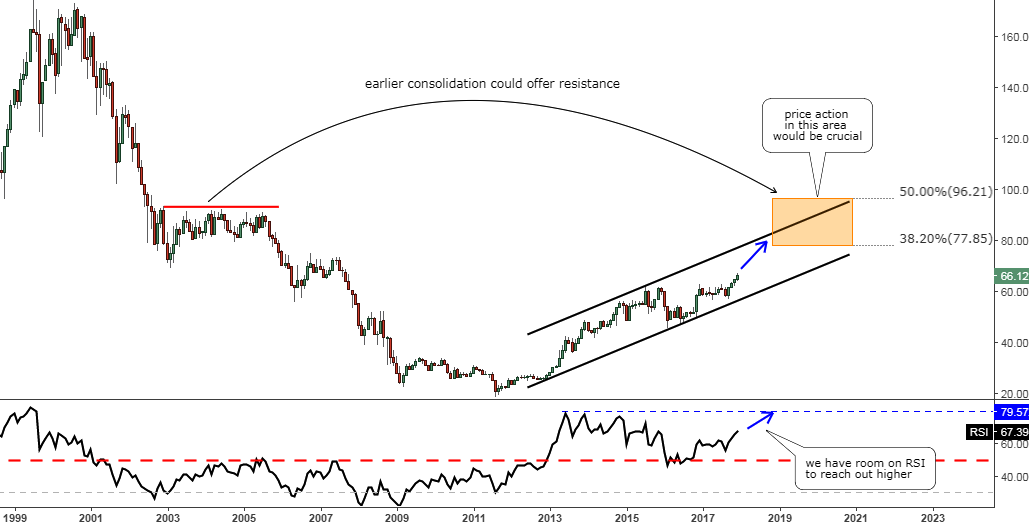 To remind you, the chart above represents the price of S&P 500 index in gold grams. The formula is S&P 500 index / Gold price x 31.1035. I chose grams to have better scalability and hence improved readability compared to the regular ratio in troy ounces.

It took the ratio five months and two attempts to break out above the consolidation resistance (62.60g) described in my earlier chart. After that the price set three consecutive bullish candles reaching out higher and higher.

Currently, the ratio is positioned in the middle of the black uptrend, and we have more room to the upside before we would reach the major resistance area. In my May call the ultimate target for the ratio was set in the area of the Y2016 consolidation at the 74.6 g.

The current upside trend could be either the first leg of correction or the first move within the major trend reversal as the preceding move was to the downside. I added the Fibonacci retracement levels to the chart to highlight the upcoming resistance area (orange rectangle) to be ready for the struggle of market forces there. It ranges from the 77.85 g (38.2%) and 96.21 g (50%). The red horizontal resistance at the 93 g level fortifies the Fibonacci barrier.

The RSI indicator keeps the support at 50 level. It has more room to the upside before it will reach the previous tops area and it gives hope for more gains in the ratio.

In the comments section of the May post, one of the readers kindly shared his opinion that the gold stocks and particularly Randgold could be a better bet than S&P 500. To show you which one performed better I put the following comparison chart below.

The chart starts on the 16th of May when my earlier post was published. There are three lines: S&P 500 Index (blue), HUI (Gold Bugs Index) and Randgold Resources (red).

At the start of the summer, all three lines rocketed above the zero line (black dashed), and Randgold with HUI index beat the S&P 500 index. But the gain of gold stocks was short-lived, and then they dipped deeply below the waterline reaching 10% loss area where I guess most of the buyers could capitulate and get rid of longs.
.
Both HUI and Randgold showed extreme volatility cutting through the zero line up and down. These instruments reached the maximum gain at the beginning of September: Randgold almost hit +15% as HUI crossed +11% notch. But these days they suffer losses again with Randgold at -2% and HUI bleeding -9%. So if you would buy and hold them, then you could be in red now.

S&P 500 Index slowly but surely scored more than 11% over the same period without dips into the negative territory from the June when all three instruments gained the track to the upside. It is amazing that the S&P 500 reached the maximum divergence with the gold stocks right at the end of the year when I decided to check the idea’s outcome today.