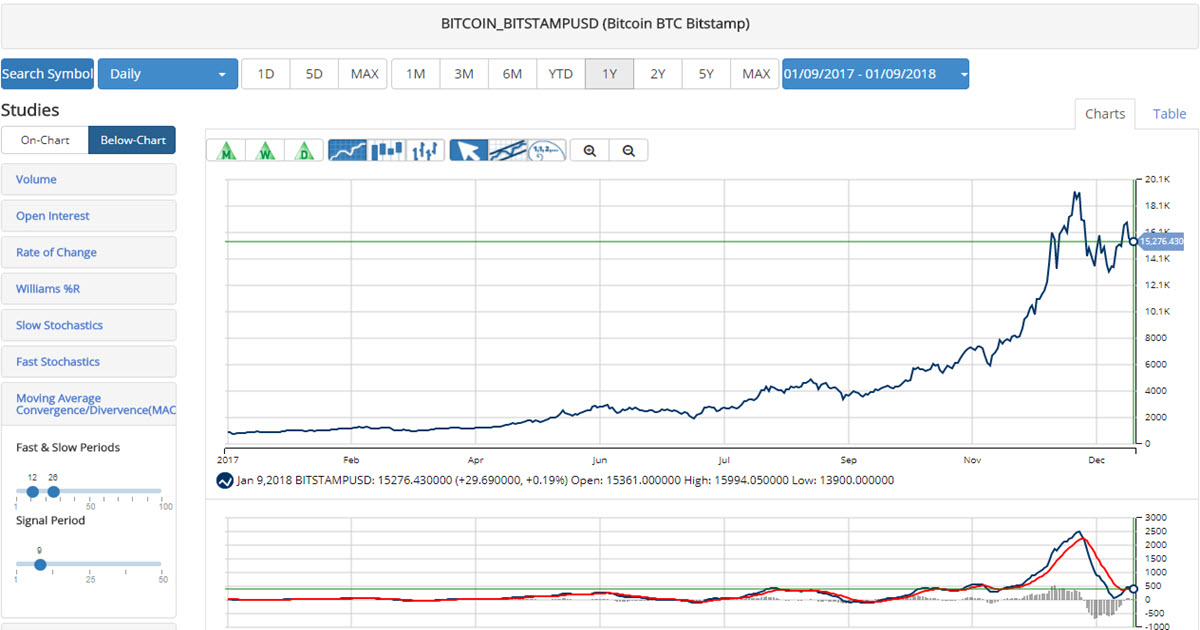 While Bitcoin may have only risen 30% in December, it increased more than 1,350% in 2017, with nearly 400% of that gain coming in December and 800% of its coming after November 1st. So what happened in the last two months of the year that caused the price of Bitcoin to rocket higher, in such as short period?

In one word, Exposure!

In early November the general public, those outside the world of finance, began hearing about Bitcoin and cryptocurrencies for the first time. They were being told Bitcoin and cryptocurrencies where the wave of the future. Blockchain technology was going to change how business transactions were being processed. They were being told that investors were making money hand over fist and this was the time to get in. There would only be 21 million Bitcoin’s ever mined, thus not allowing others to manipulate the price and that no one person, government, or central bank controlled this new digital currency.

They were told, buy a cryptocurrency now, and you will make a killing, Bitcoin only keeps going higher, it’s easy money.

None of the information the average person was being told was a lie. It was all true.

This increased exposure hit a tipping point when Thanksgiving rolled around. With the holiday falling on a Thursday, it is believed that the conversation at many dinner tables across the U.S. touched on cryptocurrencies and Bitcoin at some point, because over the course of the following three days coinbase, the largest and most well-known cryptocurrency exchange had over 100,000 new accounts open up.

The price of Bitcoin jumped more than $2,000 from November 24th to the end of the month.

The coming December 2017, which will be known as the month of Bitcoin Futures. The two largest U.S. future’s markets both saw their proposals to offer Bitcoin futures approved, and trading of said futures began during the month. The Commodity Futures Trading Commission approved the bitcoin futures and the CBOE, CME, and the Cantor Exchange all began trading Bitcoin Futures during the month.

The reason Bitcoin Futures where so important is because simply by gaining the ability to have a futures market, Bitcoin’s legitimacy increased in a blink of an eye. Furthermore, now that there where Bitcoin futures trading, the big Wall Street funds and investors could now get in on the cryptocurrency action.

The new money would start flowing into Bitcoin through the trading of its futures. This was huge in terms of making the asset more well known and respectable. But, unfortunately, it only hurt Bitcoins greatest attribute, its limited supply.

See Bitcoin Futures, unlike other futures contracts, are not settled with Bitcoins, they are settled for cash. This means when you buy Bitcoin’s through the use of a futures contract; you don’t end up owning Bitcoin’s, you just get the value of the agreed-upon Bitcoins in cash.

Furthermore, this event publicized the fact that Bitcoin had been forked in the past and that there were a lot of people planning to fork it again in the future. Each time Bitcoin is forked, and a new cryptocurrency begins, it increases the supply of cryptocurrencies available in the market. It hurts the original idea that there would only be 21 million Bitcoin’s ever mined. It hurts the idea that 1 Bitcoin is worth more than 1 Bitcoin Cash, or 1 Litecoin or 1 Ethereum or any of the other hundreds of cryptocurrencies now available.

Bitcoin futures are still new, how Bitcoin Cash or the other cryptocurrencies will affect Bitcoin, and how different world governments and agencies will handle cryptocurrencies is still very much unknown. But, after a wild end to 2017, the cryptocurrency industry isn’t yet showing signs of slowing in 2018. It should be fun to watch it unfold.

Disclosure: This contributor did not hold Bitcoin at the time this blog post was published. This article is the opinion of the contributor themselves. The above is a matter of opinion provided for general information purposes only and is not intended as investment advice. This contributor is not receiving compensation (other than from INO.com) for their opinion.

5 thoughts on “How Bitcoin Finished An Astonishing Year”