“What the internet did for communications, blockchain will do for trusted transactions.”
— Ginni Rometty, IBM Chief Executive Officer

International Business Machines Corporation (IBM) has struggled in recent years to transition away from its dependency on legacy businesses to the future of cloud, artificial intelligence, and analytics. Despite this long transition of posting 20+ consecutive quarters of declining revenue, IBM has finally posted its first revenue growth in nearly six years. Its long-term imperatives are beginning to bear fruit in emerging high-value segments that has fundamentally changed its business mix while evolving its offerings to align with new age information technology demands. New talent has driven these long-term business initiatives in these key areas as ~50% of its employee base has been added to the company within the last five years. A new frontier of growth lies in the nascent blockchain technology as IBM is a first mover in this promising, emerging technology. As IBM transitions to quarterly revenue growth, per the recent guidance of low single-digit growth, in the backdrop of its evolution to emerging high-value segments (i.e., blockchain) the company presents a compelling investment opportunity. In addition to the evolving business mix, IBM offers a great dividend, share buyback program while continuously acquiring companies to drive the business into the future.

Blockchain technology is the architecture that underpins the volatile cryptocurrency markets. This technology applies to enterprise applications since it employs a decentralized database, open ledger, and incorruptible transactional capabilities. Blockchain applies to any transactional business model whether it’s financial or goods being transacted. The open ledger concept within the blockchain makes it incorruptible as any changes need confirmation from multiple parties and any changes can be seen at any time with a permission blockchain. As a function of the decentralization, there’s no central repository or clearinghouse to be hacked or accessed. The blockchain speeds up and by-passes these intermediaries (i.e., a clearinghouse of the bank) to achieve transactions within minutes and not days (Figures 1 and 2). 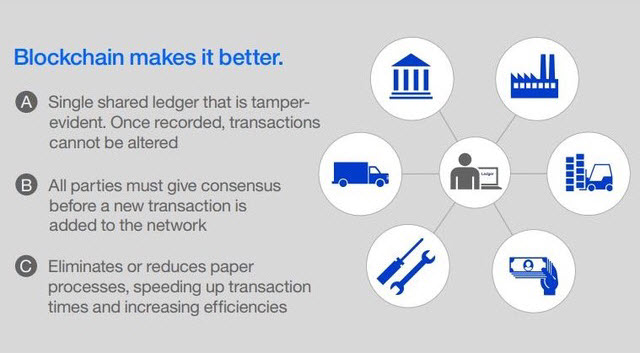 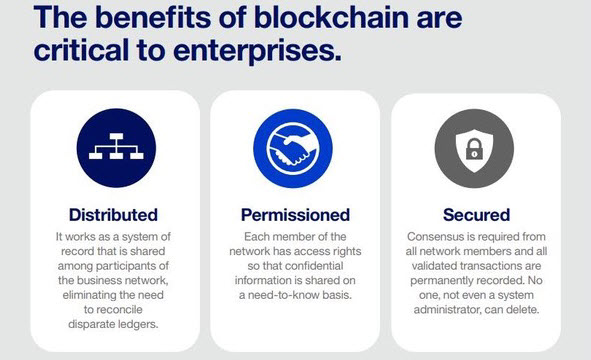 Financial intuitions are already engaging in pilot programs to migrate away from traditional networks. American Express, for example, is exploring this technology with Ripple’s blockchain technology. Visa has a partnership with BTL Group (BTLLF) exploring this superior technology for potential use. It will be interesting how the credit card companies and banks contend with this technology disruption in their space as threats emerge in the payments space employing this transaction technology. The financial sector would greatly benefit from vastly faster transaction speeds and lower transaction costs via by-passing credit card networks (Figure 3).

Bank of America Corporation (BAC) recently issued a report highlighting the fast moving trends in the financial industry and how the bank may not be able to evolve as quickly as needed. Bank of America listed risk factors in a 10-K annual report, stating, "The widespread adoption of new technologies, including internet services, cryptocurrencies, and payment systems, could require substantial expenditures to modify or adapt our existing products and services.", per Bank of America’s 10-K.

IBM is aggressively stepping into the enterprise blockchain solutions space. Any company looking to employ blockchain technology will likely leverage a company like IBM for the blockchain infrastructure as it’s a first-mover in the space. Recently, IBM and A.P. Moeller-Maersk A/S, the world’s largest shipping line, launched a joint venture using blockchain technology to track international cargo. In the agreement, IBM will provide the back end and support for the blockchain technology while Maersk will become the first to use the platform. The new venture is expected to grow with more shippers, ports and customs officials coming into the fold. The new CEO of this joint venture stated that this new company would track 18% of ocean containerized trade on its first day while more than $4 trillion in goods are shipped each year worldwide. 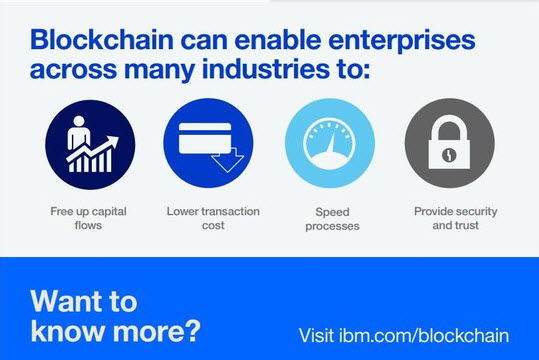 Jessica Goepfert, program director, Customer Insights & Analysis, said, "There are a multitude of potential new use cases for blockchain, as transactions and records are the lifeblood of just about every organization. However, we are seeing initial blockchain spending to transform existing highly manual and inefficient processes such as cross-border payments, provenance, and post-transaction settlements. These are areas of existing pain for many firms, and thus blockchain presents an attractive value proposition."

The distributed ledger within blockchains establishes a shared, irreversible record of all the transactions that take place within the network. The blockchain enables permission access to data in real-time. This allows multiple parties involved to collaborate utilizing a single shared view of a transaction (Figure 4). 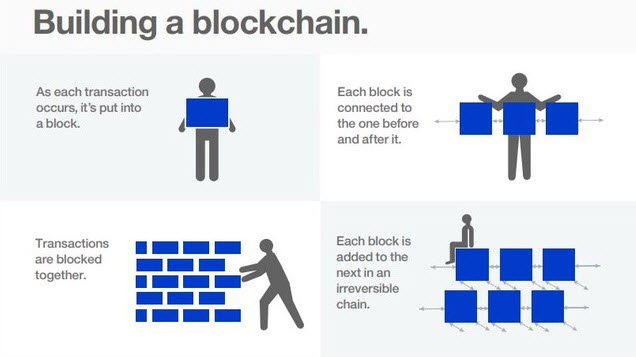 IBM looks to be making the long needed turn back to growth albeit low single-digit revenue growth; the business is still moving in the positive direction. I think its enterprise blockchain solutions will be a strong growth engine for the company as more companies adopt this superior technology. IBM is offering the first enterprise-grade blockchain platform for permission networks. Thus far in the rapidly evolving blockchain space, IBM is well positioned as it is the #1 enterprise blockchain partner with greater than 400 projects with world-renowned companies across many different sectors involving transactions such as Dow, Walmart, and Visa. Blockchain has the potential to penetrate the $2 trillion in global payments and $1.8 trillion global supply chain (Figures 5). To further augment this future growth, IBM has repositioned itself through future initiatives and acquiring 34 companies over the past three years (Figure 6). 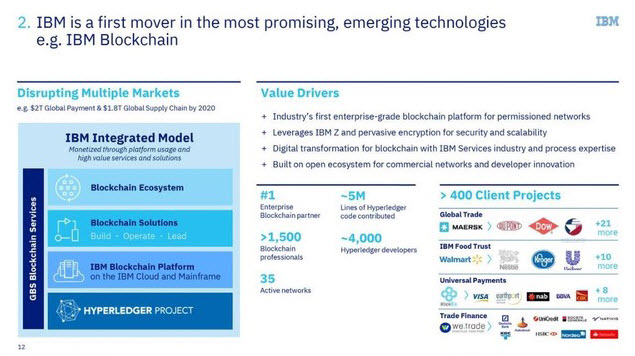 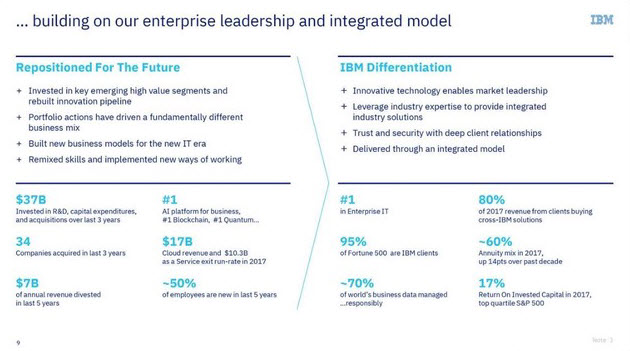 International Business Machines Corporation (IBM) has repositioned itself for future growth with new and emerging end markets. Its long-term imperatives are beginning to bear fruit in emerging high-value segments that has fundamentally changed its business mix while evolving its offerings to align with new age information technology demands. A new frontier of growth lies in blockchain technology as IBM is a first mover in this promising, emerging technology. IBM is aggressively stepping into the enterprise blockchain solutions space, and it may be a substantial growth engine for the company. IBM is offering the first enterprise-grade blockchain platform and is the #1 enterprise blockchain partner with greater than 400 projects with world-renowned companies across many different sectors. IBM offers a compelling long-term investment opportunity given its attractive valuation, dividend, share buyback program and growth initiatives.

Disclosure: The author holds shares of IBM and is long IBM. The author has no business relationship with any companies mentioned in this article. He is not a professional financial advisor or tax professional. This article reflects his own opinions. This article is not intended to be a recommendation to buy or sell any stock or ETF mentioned. Kiedrowski is an individual investor who analyzes investment strategies and disseminates analyses. Kiedrowski encourages all investors to conduct their own research and due diligence prior to investing. Please feel free to comment and provide feedback, the author values all responses. The author is the founder of stockoptionsdad.com a venue created to share investing ideas and strategies with an emphasis on options trading.