During March, the price of Bitcoin fell just about 35%. It started the month at $10,805 and ended just below $7,000. Bitcoin’s decline in March has been massive, but what I find even more interesting is this decline has been somewhat slow and steady. In the past when Bitcoin would crash, 30%, 40%, 50% or even more, it would happen in a matter of days or even hours.

The slow decline is an indication that the Bitcoin craze or Bitcoin Bubble is likely over. When the craze hit a fever pitch following the Thanksgiving Holiday in the US, the price more than doubled in just about 25 days. The Bitcoin rally hit a peak on December 17th, 2017 when they were trading for more than $19,205 per coin. More so than that, the last time Bitcoin traded in the low $6,000 range, was before the Thanksgiving Holiday when it is believed many families sat around the dinner table and discussed the “can’t miss opportunity in cryptocurrencies.” Those discussions helped fuel 100,000 new accounts being opened that weekend and the price of Bitcoin hitting $9,000 for the first time.

The Thanksgiving dinner table conversations helped foster the “fear of missing out” trend that we saw catapult Bitcoin both into the limelight and at breathtaking prices. That fear soon faded as Bitcoin fell hard, from $19,205 to $14,500 in just five days, following it hitting its record and still all-time high. Ever since then the cryptocurrency has been on a downward trajectory.

The declining price has lessened interest from both the general public and big investors, and even now we have seen the media outlets reducing coverage on Bitcoin and other cryptocurrencies. Even Alphabet’s Google searches (Fig.1) are down dramatically since the peak. A further look at the price of Bitcoin (Fig.2) and the Google search trend of Bitcoin may tell another story. The two charts side by side look very, very similar. 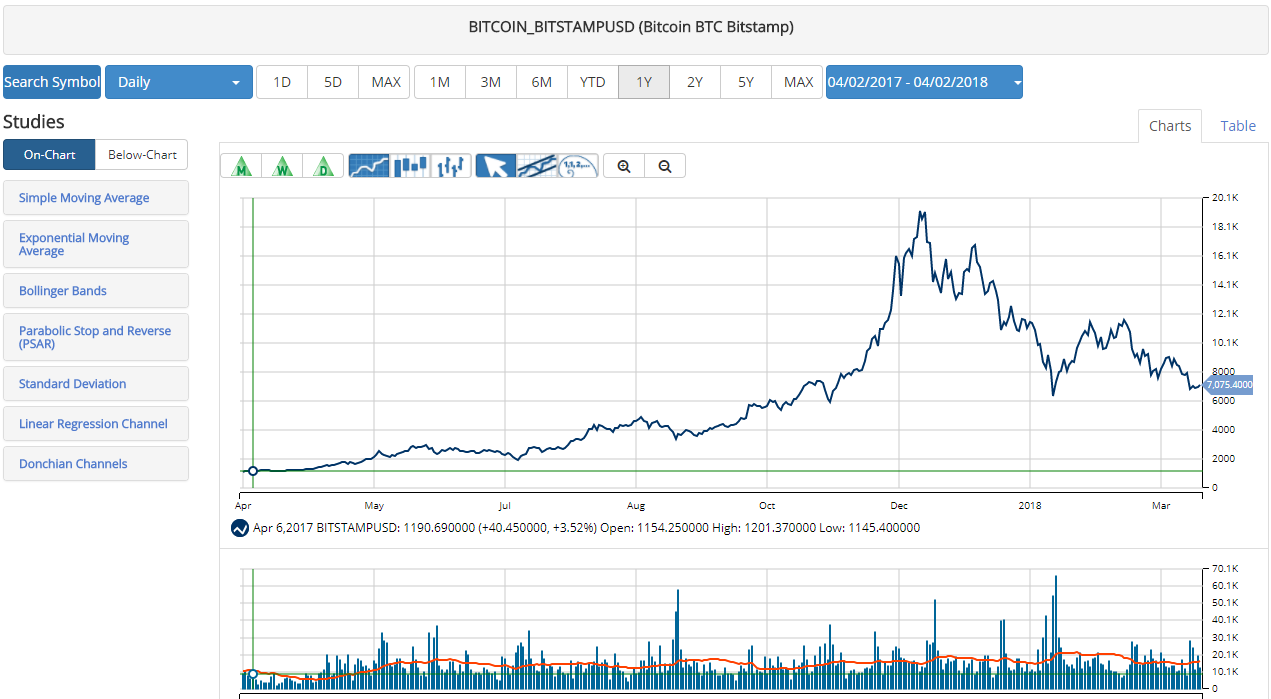 Those who had succumbed to FOMO and bought Bitcoin during its rise, are likely the same people selling the coin now, causing the price to fall back to a more reasonable level. But, that remains the one fundamental question for Bitcoin and other cryptocurrencies, “What is a fair, reasonable value?”

If FOMO caused the price of Bitcoin to skyrocket and the “fear of losing money” is now causing “investors” to sell, then we could reasonably find where Bitcoin should be priced. But, when did the Bitcoin bubble start becoming overinflated?

I would think it was before the Thanksgiving Holiday boom since that likely caused the FOMO to take hold. And for that to happen, other short-sighted investors must have been talking about how Bitcoin was “easy” money. So, when did those investors get involved? Likely someone in the previous few months and based on the chart of Bitcoin over the last year, the first noticeable jump occurred when the price rose from $2,500 to over $4,200 from mid-July to mid-August.

The $2,500 mark, in my opinion, is the bottom of where Bitcoin should be priced while the top should around say the $4,000 mark. This is based on where the price of Bitcoin may have risen if the massive FOMO induced bubble was never blown up and if the explosion of cryptocurrencies never happened.

What I mean by that is, a year ago, there were not nearly as many cryptocurrencies available to invest in. Today there are new ones popping up all the time and well over a thousand different currencies, not to mention the forks currencies like Bitcoin have gone through.

We have seen Bitcoin forked about 10 times, with the first occurring August 1st, 2017, right around the time Bitcoin was trading for $2,700. That fork created Bitcoin Cash, which trades for around $660 today. If Bitcoin traded like a more traditional investment, one could assume we should not be able to continue “forking” Bitcoin and just creating new value. Eventually, these forks should catch up with the currencies, and the price could fall to reflect these splits.

As Bitcoin currently sits just below $7,000, investors need to consider how far Bitcoin could fall as more wind comes out of the crypto sails. My statement that $2,500 would be Bitcoins floor is based on a stagnant environment, which is certainly not the case. The FOMO craze, the forks, the lack of current public interest, the explosion of other cryptocurrencies and ICO’s are all changing variables that have and will continue to affect the price of the most common cryptocurrency.

The real floor for Bitcoin could and likely is at this point much lower than $2,500. But, this time last year I was wrong when I stated that an investment in the coin at $1,000 was a terrible idea, so I could very well be wrong again this time, but what you need to consider, especially if you currently hold Bitcoin, is how wrong you can afford to be?

Disclosure: This contributor held long positions in Alphabet at the time this blog post was published. This article is the opinion of the contributor themselves. The above is a matter of opinion provided for general information purposes only and is not intended as investment advice. This contributor is not receiving compensation (other than from INO.com) for their opinion.