The Walt Disney Company (NYSE:DIS) just posted back-to-back record-shattering $200-plus million weekend openings at the box office in its Marvel franchise posting $202 and $258 million for Black Panther and Avengers: Infinity War, respectively. Wall Street hasn’t seemed to notice nor recognize Disney’s box office feat as of late. Black Panther shattered all previous President’s Day weekend records and became the third highest grossing movie of all-time domestically and ultimately grossing $1.34 billion worldwide and becoming the eighth highest grossing movie of all-time. Avengers: Infinity War posted the biggest box office weekend of all-time with $258 million while breaking the previous record set by Star Wars: The Force Awakens by $10 million. Avengers went on to set a new worldwide record over its opening weekend, posting $630 million in box office gross. In its first 11 days of release, Avengers: Infinity War grossed over $1 billion worldwide, making it the fastest movie to reach that milestone without any help from the Chinese market. Disney is in its own league and competing with itself at the box office with its Marvel and Star Wars properties. Which begs the question, is content really king as Disney is ignored and Netflix has reached parity with Disney in terms of market capitalization?

Ant-Man and The Wasp, Solo: A Star Wars Story and The Incredibles 2 are around the corner. Meanwhile Disney's Parks and Resorts are posting strong growth while shoring up its stalling Media Networks segment with a confluence of growth catalysts via streaming with Hulu (30% stake and will likely be expanded to a majority 60% stake after the Fox acquisition), BAMTech, Sling, ESPN streaming service and a Disney branded service coming in 2019. Disney is closing the gap in streaming as Hulu grows much more rapidly than Netflix and in the backdrop, ESPN and direct to consumer Disney branded streaming service comes to fruition. Disney recently reported Q2 FY2018 revenue growth across every business segment with overall revenue growth of 9%. Disney offers a compelling long-term investment opportunity considering the growth, Fox acquisition, pipeline, Media Networks remediation plan, diversity of its portfolio, tax reform, share repurchase program and dividend growth.

It's puzzling to think that Disney (at $100) and Netflix (at $338) currently possess market capitalizations of $150 billion and $147 billion, respectively. Effectively, Netflix possesses a valuation that’s equivalent to Disney despite a huge disparity in revenue, diversity in its revenue stream, tangible assets, book value, and franchises. It's noteworthy to point out that in FY2017 Disney and Netflix posted annual revenue of $55 billion and $11.7 billion, respectively. Although Disney and Netflix have dissimilar business models, there’s beginning to overlap with streaming, original content, and theatrical releases. As Disney emulates Netflix’s streaming model via Hulu, ESPN and Disney’s direct to consumer streaming service will Wall Street reward Disney in a similar manner as they do for Netflix if growth is restored in the moderating ESPN and network television segments?

Hulu has been gaining stream as of late with hits such as Handmaid’s Tale and The Looming Tower while acquiring rights to the sitcom 30 Rock. Recently Hulu reported that it now has 20 million subscribers in the U.S. and added 3 million subscribers in Q1 of 2018 eclipsing Netflix's 2 million subscribers that were added in the same quarter. The total subscriber base of Netflix stands at 55 million. Thus Hulu still has a way to go to rival Netflix in sheer numbers. The jointly owned Hulu is adding advertising on its live television subscription and downloadable content to add revenue streams to the platform.

The 21st Century Fox acquisition brings in a 60% majority stake in Hulu via Fox's ownership stake being absorbed by Disney. Taking a majority stake in Hulu will further accelerate Disney’s streaming capabilities and compete directly with Netflix. Per Bob Iger, taking majority control of Hulu is going to be beneficial and result in "flowing more content in Hulu's direction," and managing Hulu "becomes a little more clear, a little more effective." As Disney further penetrates the streaming market and monetizes this asset in conjunction with its other streaming initiatives, I feel that over time Disney will rival Netflix at its own game.

ESPN has remained at the forefront of investors’ minds, serving as the cause of this streaming initiative as profits and revenue from the Media Networks division have stalled out over the past few years. Although ESPN makes up a disproportionate amount of the company’s revenue and income, all of its other franchises are posting robust growth hence Disney will be relying less on its ESPN franchise over the coming years. Disney’s perpetual stock slump and the roller coaster ride over the last two years has almost entirely been attributable to the decrease in ESPN subscribers and subsequent revenue slowdown at its Media Networks division. ESPN's heavily redesigned app, a "one-app approach," and as planned will feature sports events not available on linear ESPN channels. The new app's "technological guts" will be "completely redone," Iger says, and will focus on three major offerings, Iger says: 1) tons of scores and highlights and news stories about sports, highly personalized; 2) "live streaming of the networks themselves" on an authenticated basis, a la the current Watch ESPN app, "ESPN, ESPN2, ESPNU, etc."; 3) ESPN Plus, with "incremental thousands of hours" of programming, including the 30 for 30 library and content made only for the app.

ESPN Plus recently launched to offer its leading sports network to streaming customers while maintaining its cable base. This effort is a delicate balance of strategically selected sports that do not interfere with its current ESPN offerings. A new companion and streamlined ESPN app are released along with this streaming service. This delicate balance of content is offered at $4.99 per month however it will not allow subscribers to stream ESPN or ESPN2. Therefore, any live NFL or NBA games airing on those networks will be off limits. Regarding live content, it will feature some college games, pro golf, Grand Slam tennis and soccer and a daily MLB and NHL game during those respective seasons along with more niche sports. This offering is geared towards core ESPN users that want more optionality for additional sporting events, niche fans of sports like rugby and lacrosse and fans that may not be able to find their alma mater teams on TV. Roku (ROKU) is making this new ESPN Plus streaming service available on its players. Roku updated its ESPN channel to make the new service available for those subscribers paying ESPN the $4.99 per month. The service is accessible to anything with a current generation device.

Disney's coming branded app will have less content than Netflix because its content will be more appealing overall, Iger says. Disney might pursue early uptake of 2019's Disney-branded streaming service by pricing it "substantially" cheaper than Netflix. The company is making the right steps with its plans to target evolving media consumers with the two streaming services, JPMorgan's Alexia Quadrani says. The next two fiscal years look good for the film slate as well, she notes, with a pair of Star Wars canon films yet ahead, and another trilogy on the way along with stand-alone films like Solo. Disney’s streaming service will include content from Disney's four major brands (Disney, Pixar, Star Wars/Lucasfilm and Marvel). It will have 4-5 independent feature films per year as well as well as original series. Already in development is a Star Wars live-action series, as well as other series based on its Monsters film and High School Musical series. All-in-all, bringing all of Fox’s studio and TV assets into the streaming fold will only add to the formidable challenger that Disney is becoming to Netflix.

Disney said it intends to remove all of its movies from Netflix and instead plans to launch its own streaming service starting in the U.S. and then expanding internationally. Disney opted to exercise an option to migrate its content from the Netflix platform. Movies to be removed include Disney and Pixar titles, according to Iger. Netflix said that Disney movies would be available through the end of 2018 on its platform while Marvel TV shows will remain. The new platform will be the home for all Disney movies going forward, starting with the 2019 theatrical slate which includes "Toy Story 4," "Frozen 2," and the upcoming live-action "The Lion King." It will also be making a "significant investment" in exclusive movies and television series for the new platform.

“Driven by strong results in our parks and resorts and studio businesses, our Q2 performance reflects our continued ability to drive significant shareholder value,” said Robert A. Iger, Chairman, and Chief Executive Officer, The Walt Disney Company. “Our ability to create extraordinary content like Black Panther and Avengers: Infinity War and leverage it across all business units, the unique value proposition we’re creating for consumers with our DTC platforms, and our recent reorganization strengthen our confidence that we are very well positioned for future growth.” 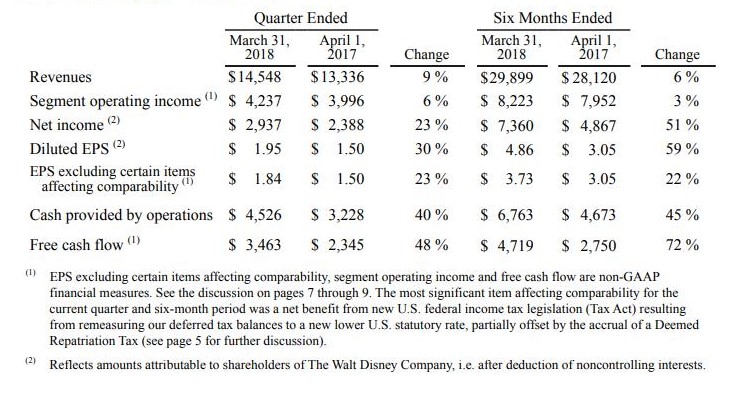 Parks and Resorts remain a bright spot, and Disney continues to invest and possess pricing power, hence the price hikes at the parks. Toy Story Land and Star Wars land are major projects at Disney parks that may further drive revenue growth. A strong movie slate has reinvigorated the Studio Entertainment and Consumer Products & Interactive Media segments while major streaming initiatives are in the works to remediate the Media Networks segment. This confluence may bear fruit as FY2018 is already off to a great start through the first two quarters with further initiatives taking hold.

FY2018 Q2 earnings posted growth across the board in every business segment with overall revenue increasing nearly double digits. Disney has growth catalysts in Parks and Resorts, streaming, studio strength and the Fox acquisition. Disney has been establishing a firm footing in the streaming space via Hulu (30% stake now converting into a majority 60% stake after the Fox acquisition), BAMTech, Sling, ESPN streaming service and a Disney branded service coming in 2019. The studio segment is off to a great start in FY2018 with record-breaking movie releases such as Thor: Ragnarok and Star Wars: The Last Jedi, Blank Panther, and Avengers: Infinity War. Disney is evolving to address the deteriorating Media Networks business segment with major streaming initiatives. Disney has one of its biggest movie slates for FY2018 with Solo: A Star Wars Story, Ant-Man and The Wasp and Incredibles 2 around the corner. Disney also announced that it is acquiring 21st Century Fox’s assets to further drive growth for $52 billion. This acquisition brings in noteworthy studio assets such as more Marvel properties (X-Men, Fantastic 4 and Deadpool) and Avatar along with TV content and regional sports. Disney offers a compelling long-term investment opportunity considering the growth, Fox acquisition, pipeline, Media Networks remediation plan, diversity of its portfolio, tax reform, share repurchase program and dividend growth.