Public relations fiasco is putting it lightly in the wake of the Cambridge Analytica data misuse scandal. Once the news broke that Facebook Inc. (FB) was behind the mishandling of user data that was shared with a politically connected firm during the 2016 presidential race, Facebook’s stock tumbled from $195 to $152 or a 22% slide. Mark Zuckerburg went into damage control mode via rolling out transparency tools, metrics, impacted user details and testifying before Congress. The border questions of potential regulation, public backlash, additional data misuse cases and whether or not any material impact to revenue, as a result, remain in question. Over the past few quarters, Facebook has ramped up spending on initiatives to combat fake news, ensure data integrity, implementing stringent guidelines on third-party data sharing and overall transparency within its platform. Thus far, the early fallout from the Cambridge Analytica scandal has been immaterial to revenue albeit the recent quarterly numbers only reflect roughly two weeks of post-scandal numbers. Facebook had already moved to overhaul its news feed in favor of “meaningful social interactions” versus “relevant content” to improve its user experience.

Cambridge Analytica is a political firm that gained access to 50 million Facebook accounts in an alleged effort to profile users based on personality traits such as “likes” and use that information to target audiences with digital ads. In 2014, researchers conducted personality surveys via downloading an app which extracted some private information from their profiles and those of their friends. This type of data mining that has previously been allowed has since been banned by Facebook. All users that took the survey consented to have their data procured albeit they were told that these data were being used for academic purposes. Facebook stated that no passwords or “sensitive pieces of information” was compromised throughout this information gathering by Cambridge Analytica.

Facebook stated that this was not a data breach as the company routinely allows researchers to access user data for academic use however per Facebook’s user agreement, all users consent to this routine practice. However, Facebook explicitly disallows these data from being sold or transferred “to any ad network, data broker or other advertising or monetization-related service.” Here in lies the debate, this is what Cambridge Analytica engaged via an intermediary serving as the researcher who then transferred the procured data to the political firm.

Facebook has taken aggressive actions to provide clarity and transparency on this privacy scandal. Facebook apologized for the Cambridge Analytica data misuse as a "breach of trust." Mark Zuckerberg pledged to make changes and reforms in Facebook policy to prevent similar breaches. Zuckerberg published a personal letter in various news outlets apologizing. Recently, Facebook decided to implement the EU's General Data Protection Regulation in all areas of operation. As Facebook continues to effectively manage this public relations challenge I feel that the public will absolve the company of this misuse issue and move beyond these issues.

Currently, similar high growth technology companies such as Google, Amazon, Visa, and Netflix now possess a less favorable profile when looking at the P/E ratios and growth rates (Figure 1). Facebook's projected growth is more significant than Google's, Visa’s and on-par with Amazon’s yet Facebook has a P/E ratio that's less than Google's, Visa’s and a fraction of Amazon’s and Netflix's. Facebook has the lowest PEG ratio of any of these stocks as well. On a relative basis, Facebook is inexpensive as compared to other large tech companies with a similar growth profile. 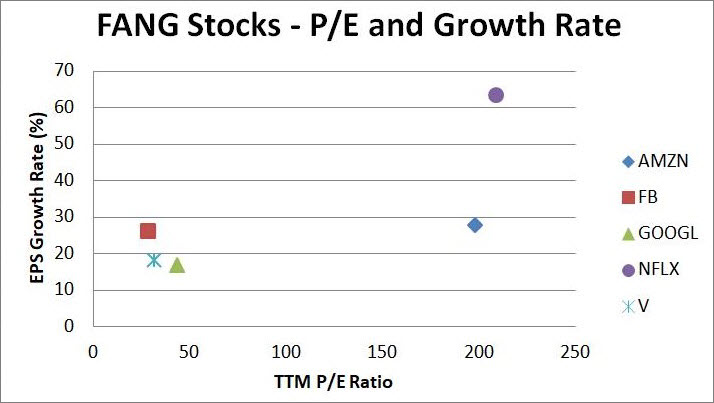 Where Else Are Advertisers and People Going To Go?

Regarding the moat, Facebook possesses a deep moat that’s comprised of Facebook, Instagram, Messenger, and WhatsApp. Facebook and its properties have dominated the social media landscape for years and will likely continue its dominance where monthly active users stand at 2.2 billion. Instagram has been a major growth area for the company in recent years, outcompeting Snapchat (SNAP) in its growth path. Regarding advertising, the go-to platforms are Facebook properties, and outside of those, there aren’t very many options where companies can maximize ad dollars. Many Fortune 500 CEOs have communicated that Facebook is the most effective means of reaching their target audience and thus maximizing advertising spend.

Facebook has posted robust growth in all metrics about user growth and engagement while monetizing has moved in lock-step over the years. For such a large capitalization company such as Facebook, this growth is very impressive. Facebook just recently acquired teen app called tbh in October of 2017. Facebook provides the most durable growth out of the basket of similar growth stocks with a lower P/E and PEG ratio and thus provides a margin of safety. Facebook has plenty of room to appreciate into the years ahead given its growth, and even if the stock appreciates to ~$200 range soon, it will still be inexpensive on a relative basis. Facebook makes a compelling case that it is the superior choice for long-term growth with a low-risk profile within its growth cohort.

In the wake of the Cambridge Analytica data misuse scandal, Facebook’s stock tumbled from $195 to $152. The border questions of potential regulation, public backlash, additional data misuse cases and whether or not any material impact to revenue, as a result, remain in question. Over the past few quarters, Facebook has ramped up spending on initiatives to combat fake news, ensure data integrity, implementing stringent guidelines on third-party data sharing and overall transparency within its platform. Thus far, the early fallout from the Cambridge Analytica scandal has been immaterial to revenue. Despite all the headlines regarding the privacy scandal, Facebook posted a monster blowout for its Q1 2018 numbers with a 13% increase in active users while growing revenues by 50% to $11.8 billion. Facebook remains incredibly cheap considering its phenomenal growth with a P/E of 28.7 and PEG of 1.08 at a stock price of $174. I maintain my long thesis with a price target of $220 by the end of 2018. In my opinion, Facebook is the most compelling high-growth technology stock when compared to other companies with a similar growth profile and market capitalization. Facebook and its properties are clearly the go-to social media platform for both users and advertisers