HealthEquity Inc. (HQY) once again blew out the numbers when it reported its Q1 FY19 results with the stock following suit breaking out above $80 per share to an all-time high. I first profiled HealthEquity when it was trading in the sub $40 range as a play on a secular growth trend in the healthcare space regardless of legislative actions, drug pricing debate or rising insurance costs. HealthEquity is not an insurance company thus does not possess any liability for coverage in any capacity nor does the company play any role in the pharmaceutical supply chain.

HealthEquity is at the center of a healthcare paradigm shift where consumers are taking control of their healthcare dollars via leveraging Health Savings Accounts (HSAs). HealthEquity manages funds allocated for medical, dental and vision expenses that are deducted on a pre-tax basis and deposited into a dedicated HSA account. HealthEquity manages $6.9 billion in assets across 3.5 million accounts against a potential market maturity of $1 trillion in assets across 50-60 million accounts.

HealthEquity has posted annual revenue growth of 42%, 44%, 41% and 29% over fiscal years 2015, 2016, 2017 and 2018. The durability of this growth has a long runway due to the secular growth in the HSA market. The company is sitting on largely untapped revenue sources where the vast majority of account holders have yet to invest any HSA money in investment offerings. Expanding margins for greater profitability is also unfolding as the older the account, the greater the gross margins hence gross margins increased 269 basis points in the recent quarter. HealthEquity is currently sitting on a healthy balance sheet with ~$270 million in cash and cash equivalents with zero debt. HealthEquity is posting accelerating revenue, cash flow, margin expansion and income growth with a strong balance sheet. I feel that HealthEquity will continue to post strong growth as it services the double-digit HSA growth market and manages more assets, accounts, and investments within these accounts. HealthEquity may be a great long-term investment in the healthcare space that’s independent of the health insurances, pharmaceutical supply chain companies, drug makers or pharmacies.

HealthEquity has posted annual revenue growth of 42%, 44%, 41% and 29% over fiscal years 2015, 2016, 2017 and 2018 (Figure 1). These quarterly and fiscal year growth numbers are phenomenal across the board and looking at the total addressable market and continued secular growth trends, HealthEquity is poised to continue its growth, further evidenced by its recent quarterly results. 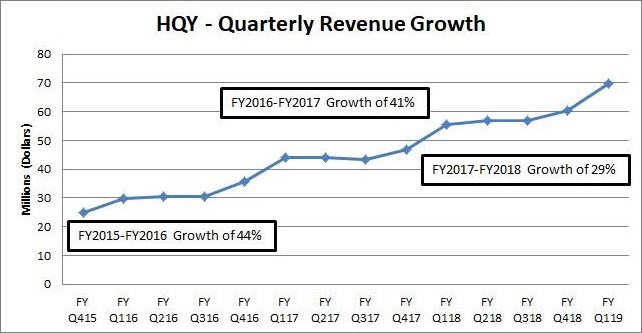 Post Q1 FY19 earnings, analysts raised price targets beyond $80 per share based on expanding market conditions, execution in the space and overall growing business across the board.

Barrington Research raised its price target on HealthEquity to $85 from $65 while retaining its outperform rating, after Q1 beat with a strong showing in all key metrics. "While the valuation appears still stretched at 13.0x FY/20 revenue, we believe a premium is warranted," Barrington analyst Alexander Paris said in a note, pointing to its current and prospective growth profile, leading position within the market, recurring nature and visibility of its revenue, the leverage inherent in the model and its high free cash flow conversion.

Chardan raised its price target to $96 per share, up from $77, rating the shares at a buy. Chardan said its price-target increase for HealthEquity's stock is "based on the company sustaining its current higher multiple.", "We liked the strong demand we are seeing from the marketplace and strong execution from management." Chardan noted HealthEquity's Q1 results topped analysts' expectations amid what it called a "strong performance in custodial and interchange revenue." It also highlighted that HealthEquity's management "sounded confident in their ability to grow the market share and improve margins" in fiscal 2019.

Oppenheimer has raised its price target on HealthEquity to $85 from $68 while keeping its outperform rating, after strong Q1 showing with record HSA new accounts, with potential for upside to numbers keeping the growth story enticing. "We're getting into egregious, unheard of valuation levels that will likely make the stock volatile," Oppenheimer analyst Mohan Naidu said in a note. "But the secular trend in HSA adoption, increasing interest rate environment and potential for regulatory action that could further drive HSA penetration makes this stock enviable and continue to work."

Devenir, an investment solutions company for Health Savings Accounts (HSAs), released a survey for the year-end 2017, which showed HSAs have grown to an estimated $45.2 billion in assets and 22 million accounts for the period ending December 31, 2017. Even more, the popularity of HSAs has increased substantially over the past decade. As of 2017, 22 million people were enrolled in HDHP/HSA compared to a mere 3.2 million in 2006. These findings reinforce a consistent growth trend for health spending accounts and a shift toward the consumer taking control over their healthcare spending (Figures 2 and 3).

“We are seeing consistent growth in new HSA accounts at a growth rate more than 20 percent year over year, and we expect that to continue for the next couple of years,” Jon Robb at Devenir.

Key findings from the Devenir year end 2017 HSA Survey conducted in January of 2018 include:

Devenir currently projects that the HSA market will exceed $60 billion in HSA assets by the end of 2019, held among roughly 27.5 million accounts. As this market continues to grow double-digits through 2020, HealthEquity is a top pick to play this growth trend. 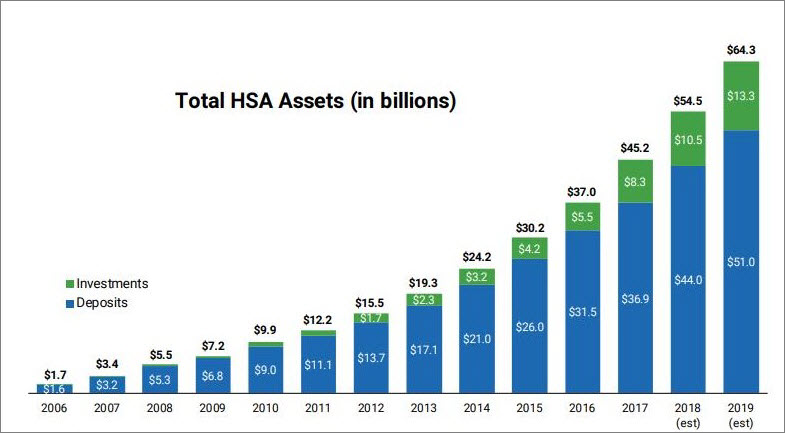 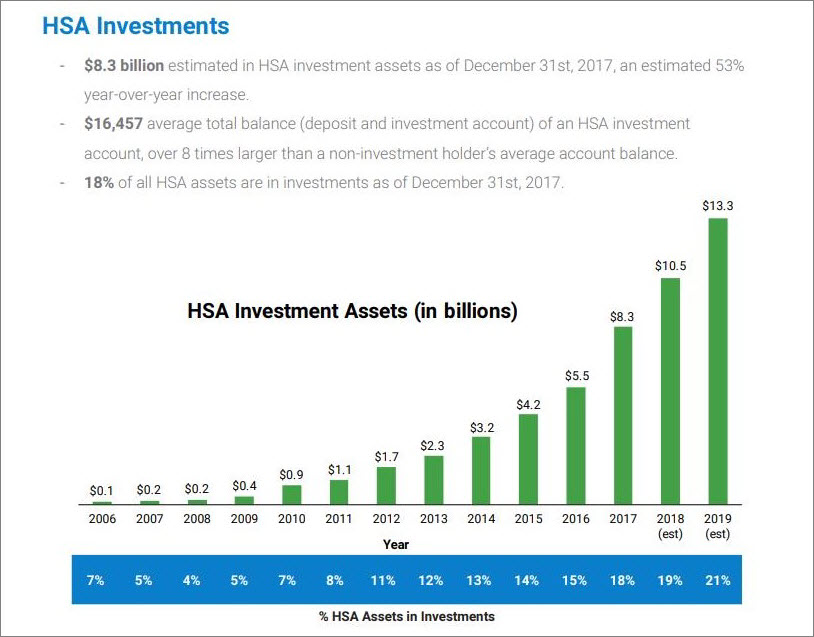 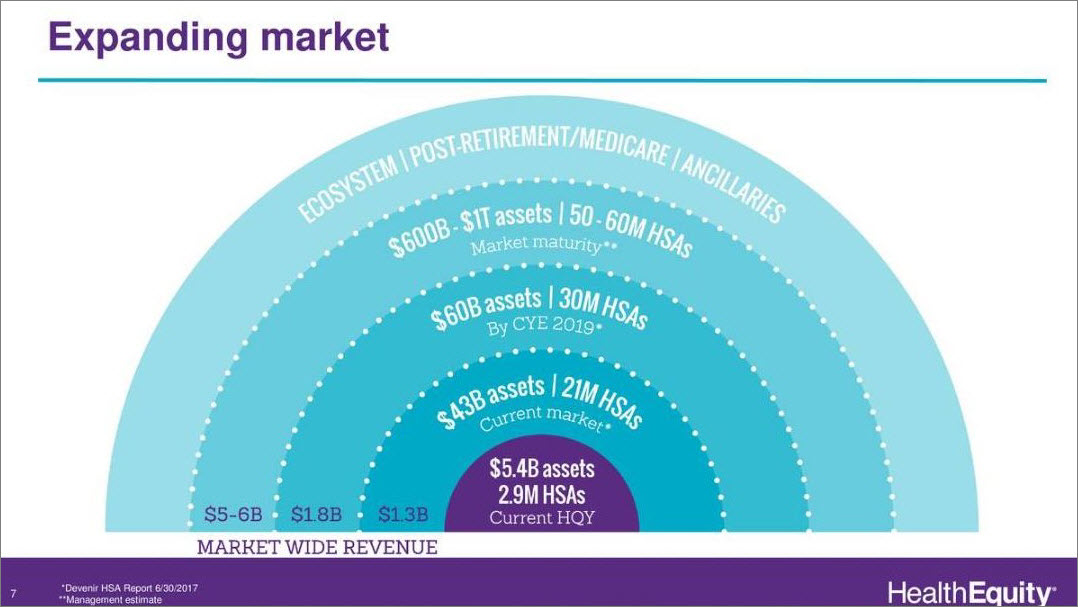 HealthEquity is posting accelerating revenue, cash flow, and income growth. These growth numbers have continued the uptrend over the years and with its strong quarter to open FY19. The company is sitting on untapped revenue sources and plenty of room for margin expansion. Regarding untapped revenue sources, of the 3.5 million members, 96% (previously 98%) of account holders have yet to invest any money within its HSA accounts, effectively serving as a second 401k (after age 65). However, in its recent quarter, HSA Members with investments rose to 134,246 an increase of 74% compared to Q1 FY18. This serves as an untapped pool of money that can invest in various mutual funds while HealthEquity collects a small fraction of the dollar amounts invested in these investment accounts as management fees (Figure 5). Considering that the average age of an account is only ~ three years and over 50% have been open for two years or less, this provides ample opportunity for future penetration in this investment space. Given the fact that these account balances are correlated with age translates into more probability that any surplus will be invested to drive account value (Figure 5) further.

Regarding expanding margins for higher profitability, the older the account, the greater the gross margins. Overall, in FY17 gross margin on all accounts was 60%. However, this increased to 68% and then further to 72% for accounts opened for three years and six years, respectively. It’s noteworthy to highlight that HealthEquity has grown its business by double-digits across all segments; Services, Custodial and Interchange. In its current quarter, we see continued margin expansion across the board with gross Q1 margins increasing by 269 basis points to 63.5 and operating margins increasing by 63 basis points to 29.3% and adjusted EBITDA increasing by 129 basis points to 42.5%. 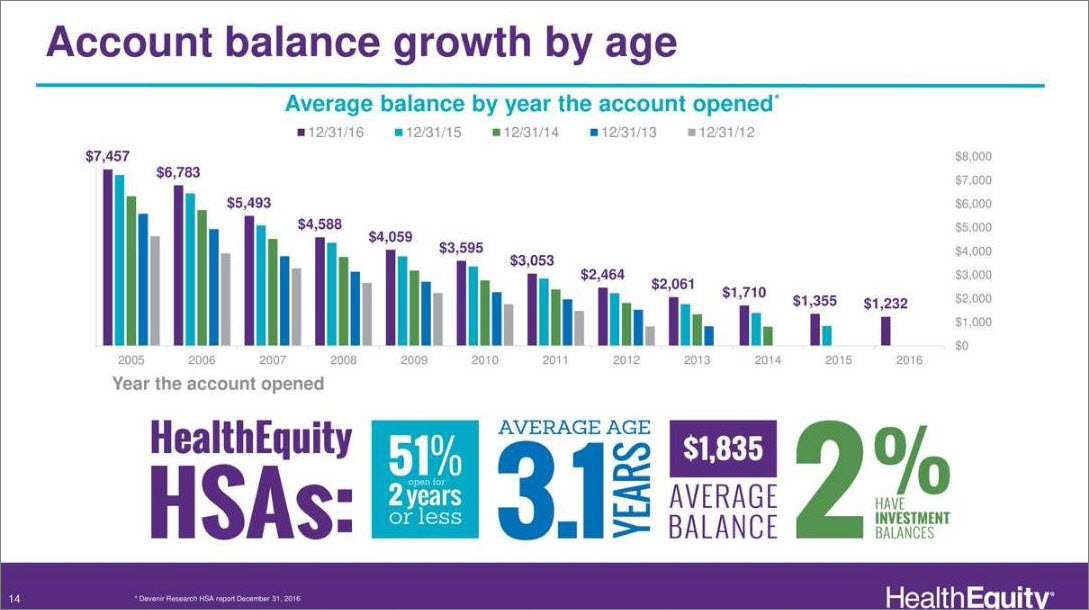 Figure 5 – Older accounts contain more assets, have higher gross margins and give rise to potential conversion into the investment option of HSA accounts.

A slew of analysts have come out and raised their price targets on HealthEquity due to accelerating revenue, cash flow and income growth across all segments of its business in the backdrop of an HSA secular growth market. Chardan, Oppenheimer and Barrington Research raised their price targets to $96, $85 and $85, respectively. The company is debt-free and expanding its balance sheet with just over $270 million in cash and cash equivalents. HealthEquity has been growing market share with plenty of market expansion ahead of itself. HealthEquity has posted annual revenue growth of 42%, 44%, 41% and 29% over fiscal years 2015, 2016, 2017 and 2018. HealthEquity manages $6.9 billion in assets across 3.5 million accounts against a potential market maturity of $1 trillion in assets across 50-60 million accounts. Assuming a 15% market share, at market maturity this translates into $150 billion in assets and 9 million accounts. The company is sitting on untapped revenue sources, and gross margin expansion is beginning to bear fruit as accounts age and more funds are channeled into investment vehicles. I feel that HealthEquity Inc. (HQY) will continue to post strong growth as it expands the number of accounts, manages more custodial assets, expands gross margins and more accounts transitioning into investment vehicles. The HSA market is a double-digit growth market, and HealthEquity will continue to grow in lock-step while delivering more offerings to its clients.

One thought on “HealthEquity - Breaking Out Above $80”