I recently profiled AMC Entertainment Holdings Inc. (AMC) as a compelling buy in the backdrop of a record-setting year at the box office, a robust slate of movies for 2018 and 2019, a strong consumer, dividend yield of over 4% and accelerating revenue and EPS growth. AMC was trading near $14.50 or nearly 30% below its 52-week high in July. AMC is reengaging the consumer via digital, mobile and loyalty program options, reformatting theaters to enhance the user experience and international expansion augmented by a healthy share buyback program. After coming off record first quarter numbers in June across all categories, the stock looked very attractive considering its depressed valuation, industry strength forecasted through the remainder of 2018 and through 2019 coupled with a slew of company initiatives to drive the consumer experience. Sure enough, AMC has been on the rise and reported its Q2 earnings in August. AMC posted robust growth with record admission and food and beverage revenue increasing ~18% and 19%, respectively while overall revenue increased 20% year-over-year. Since July, AMC has broken out from ~$14.50 to ~$19.50 for a ~30% appreciation in stock value. AMC remains compelling despite this recent appreciation on any significant pullback since the long-term growth narrative remains intact while revenue continues to grow at a double-digit clip.

Adam Aron, CEO and President of AMC said, “Obviously we are very pleased by AMC’s record results for the second quarter of 2018, especially given the magnitude of the impressive 20% increase in total revenues and an 80.3% year over year growth in Adjusted EBITDA for AMC. Our success was the result of our continued innovation in the design of our marketing programs and the theatrical experience we offer our guests, as well as an intense focus on the disciplined execution of our financial and operational strategies. And we had the opportunity to do so against a backdrop of a record-setting industry movie slate that delivered the highest quarterly domestic box office admissions revenues in history.”

Aron added, “In the second quarter of 2018, once again AMC truly blazed new trails on a wide array of fronts. Our AMC Stubs program crossed 15 million-member households and now stands at 15.8 million. We launched AMC Stubs A-List, which as of midnight last night had 181,790 paid members. Our online advance ticketing activity in the U.S. is soaring, up 131% year over year. AMC’s food and beverage revenue per patron in the U.S. was $5.29, the highest of any major U.S. operator. Looking globally, AMC is the largest operator of premium large format screens in the world, and admissions revenues at our IMAX, Dolby Cinema and all of our premium large format screens grew in the quarter by 70.3% in the U.S. and 17.5% in Europe. Also, we continued to march ahead renovating theatres with our signature recliner seats to very attractive financial returns both in the U.S. and in Europe, as well as in opening new theatres, with expectations to renovate 44 theatres and open 16 new ones this year. Nowhere did a theatre opening ever capture so much press attention as was the case at the new AMC Cinema in Riyadh. That April cinema unveiling, done in partnership with the sovereign wealth fund of Saudi Arabia, ended a 37-year ban on cinemas and is the first of what we expect will be 50-100 AMC Cinemas to open in the years ahead in our 16th country. We managed our expenses tightly, triggering a 570-basis point improvement to theatre adjusted EBITDA margins globally, including a 700-basis point margin improvement in the United States. And finally, in the quarter, we continued to buy back stock, pay an attractive dividend and deleverage -- in part due to our earnings strength and in part through AMC having successfully monetized some $500 million of non-strategic assets over the past 11 months. Taking all this together, AMC made enormous progress in the second quarter of 2018.”

Aron concluded, "While we are proud that AMC set financial records and outperformed the competition in Q2, it really shouldn’t be a surprise that AMC did well financially at a time when industry revenues were robust. What may be the biggest news of all, though, is just how healthy are both AMC and the movie business overall. This is a solid and steady industry over the long haul. Theatre revenues have been growing over the past two decades. Honing in on our U.S. business in April through June, AMC’s attendance per screen increased 21.1%, AMC’s domestic admissions revenues were up 22.8%, outpacing overall domestic industry box office revenues which were up a still noteworthy 21.4%. Consider that movie after movie has shattered attendance and revenue records this year, and that all-time overall monthly domestic industry box office revenue records were set in five different months out of the past ten. It is finally time for the sky-is-falling-in cynics to admit that they misinterpreted a brief slump in moviegoing last summer. Our industry is flourishing and strong, and the prospects for AMC are enormously bright.”

AMC capital return plan is very shareholder friendly, currently paying a dividend of $0.20 per share on a quarterly basis translating into a ~4.2% yield. In addition to its dividend, AMC has an active share repurchase program which is in the midst of a $100 million authorization and has repurchased approximately 56% of this authorization. AMC has purchased 3.7 million shares for approximately $55.7 million or an average share price of $15.07, representing a good use of capital relative to its current price.

Major theatrical releases continue to break U.S. box office revenue records thus far in 2018. Per Box Office Mojo, yearly box office revenue already topped $8.3 billion outpacing 2017 by 10% and the 2016 record year by 2.8% (Figure 1). Thus far 2018 has posted the second largest first quarter and record second quarter at the box office. U.S. box office revenues hit a record $3.3 billion in the second quarter due in large part to Disney’s (DIS) “Avenger’s: Infinity War” and “Incredibles 2” with domestic grosses of $679 and $603 million, respectively. It’s noteworthy to point out that April and June were record months at the box office and revenue from April to June was up ~23% compared to the same period in 2017 ending the second quarter on a strong foot. Overall, June brought in a record $1.269 billion in domestic box office receipts besting the previous record set in 2013 at $1.246 billion. The summer box office came in 14.6% higher than 2017’s summer numbers. Translating these numbers into actual ticket sales to normalize for inflation and actual demand, 2018 is estimated to be 900.7 million through September 5th and compared to the record year in 2002 when ticket sales came in at 1,575.7 million. 2018 may test these record sales. 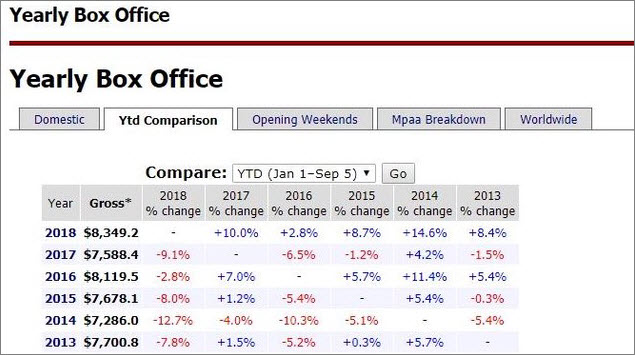 2018 already has three films that have surpassed $600 million with “Avengers: Infinity War” ($679 million), “Black Panther” ($700 million) and “Incredibles 2” ($603 million). Thus far and Disney’s big three films have grossed nearly $2 billion domestically. Disney’s slate for 2019 has highly anticipated releases that stand to rack in billions in box office receipts such as “Captain Marvel” (the first female lead for a Marvel film), “Dumbo”, “Avengers 4”, “Aladdin”, “Toy Story 4”, “Lion King”, “Frozen 2” and “Star Wars Episode 9”. Disney is poised to defend its box office dominance through the remainder of 2018 and again in 2019.

Analysts are also looking to a strong third quarter. MKM Partners' Eric Handler is expecting the third-quarter box office to grow 4% compared to last year, thanks to releases in July such as "Ant-Man and the Wasp," "Hotel Transylvania 3: Summer Vacation" and "Skyscraper" and "Mamma Mia! Here We Go Again." August is expected to be a big month, with "Mission: Impossible -- Fallout" and Disney's " Christopher Robin" "There can be no doubt now that when Hollywood makes appealing movies, Americans flock to movie theatres in huge numbers," said CEO and president of AMC Theatres Adam Aron. This summer has already been shaping up to live up to these expectations.

AMC Entertainment Holdings Inc. (AMC) is sitting on a host of positive tailwinds with record-setting box office numbers thus far in 2018, reengaging the consumer via digital, mobile and loyalty program options, reformatting theaters to enhance the user experience and international expansion. They recently teamed up with Facebook to sell movie tickets to drive the social media avenue. There’s near term and long term catalysts in the movie slate for the remainder of 2018 with a robust movie slate in 2019 specifically pertaining to Disney’s franchises. AMC has appreciated roughly 30% since I profiled this stock while boasting a 4% dividend yield augmented by a healthy share buyback program and coming off record first and second quarter numbers across all categories. As AMC heads into its Q3, the stock remains attractive considering its valuation and industry strength forecasted through the remainder of 2018 and through 2019. I’d look for any significant pullback to buy on the weakness.