Hello traders everywhere. All three indexes are looking to post weekly gains on a nice little rally that happened this week. They were all looking to close above their respective 200-day MA's, but it looks like the S&P 500 and NASDAQ will fall just short, while the DOW is trading above it once again. Could the 200-day MA be the line of resistance for the two indexes? The last time that the indexes traded below the 200-day was back in December of 2015 and that trend lasted until March of 2016. We could be in for a rough close to the year if history holds true.

As we stand in early afternoon trading on Friday the S&P 500 is looking at posting a weekly gain of +2.3%; the DOW stands at +2.3% and the NASDAQ checks in with an increase of +2.7% even as Apple Inc. (APPL) missed earnings and is putting pressure on the tech sector losing roughly 6% on the day. 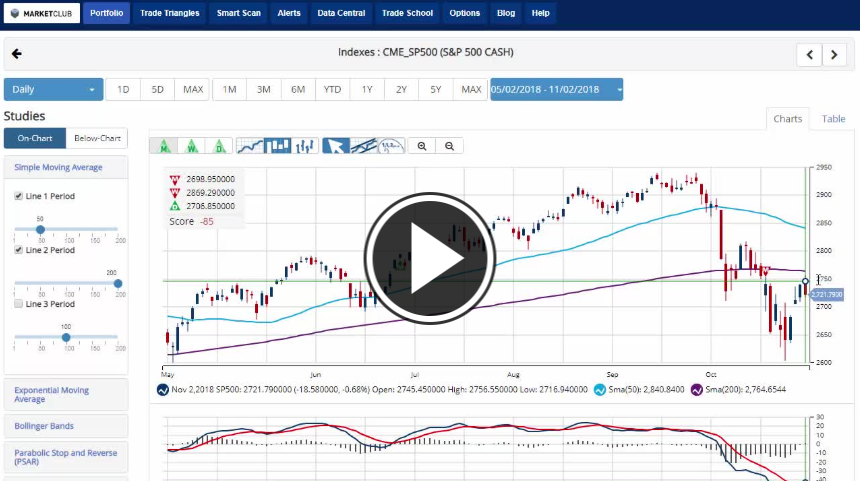 The U.S. Dollar and Gold continue to track each other consistently and are both relatively unchanged on the week. On the opposite side of trading, crude oil has dipped to its lowest levels in six months issuing a new red monthly Trade Triangle indicating that long-term trend has turned negative. Oil is posting a -6.6% loss on the week making this four straight weeks of declines. The reason for the drop is an abundance of oil in the world market which is relieving tensions over the coming Iranian sanctions by the U.S.

Bitcoin oh Bitcoin, there's honestly not much to say. It continues to trade in a tight range with no real moves being made in either direction.