Hello traders everywhere. The midterm elections are over, and the stock market is on the move higher. Are we going to get a long-term post-election rally or is this just a short-term bump? The S&P 500 has jumped above its 200-day MA for the first time in eleven days, but we're still waiting on a new green weekly Trade Triangle to exit a short position in the S&P 500.

The DOW broke above its 50-day MA and issued a new green weekly Trade Triangle at 25,817.68 pushing the Chart Analysis Score to +75 indicating that a long position may be in order for the DOW. We'll have to see if there's carry through at the end of the week or if this is just a short-term election euphoria bump.

The NASDAQ is trading just below its 200-day MA standing at 7,519.45 with a Chart Analysis Score of -70. Even if The NASDAQ trades above the 200-day in the coming days it still has some work to do to enter a sidelines position. 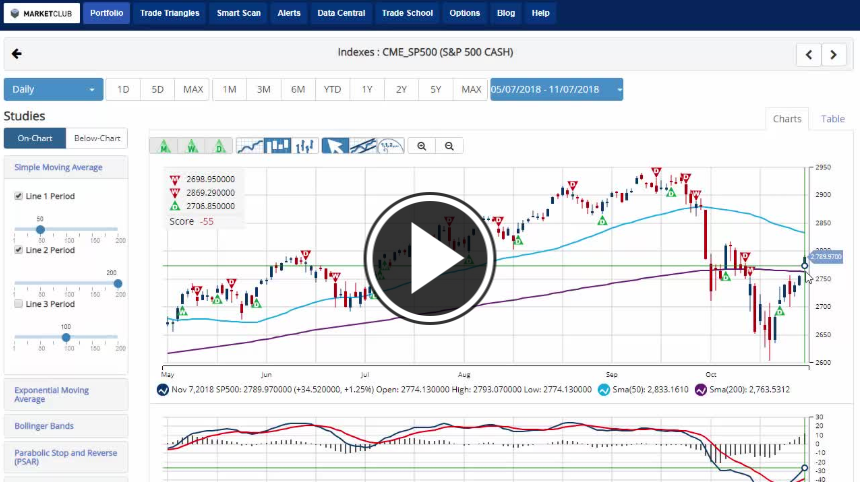 On the opposite end of the spectrum, the U.S. dollar is not buying into the post-election hype and traded as low as 95.48 before backing off the session lows. But it is still down on the day and is down .60% on the week.

Crude oil is down on the day once again falling 1.7% after reports from the API estimated a crude oil inventory build of 7.83 million barrels, the EIA added fuel to the bearishness by reporting a build in inventories of 5.8 million barrels for the week to November 12. It looks like we may be heading into the winter with an oil supply glut vs. the shortage that the market was expecting.

Gold continues to be trapped in a range but did make a big move in early trading as the dollar was dropping, but just like the dollar it has come back to reality and is only up .26% on the day. It did issue a green daily Trade Triangle indicating that a move to a short-term long position. Just be wary of the current choppiness.

Bitcoin finally made a little larger than average move to trigger a new green weekly Trade Triangle at 6,486.29 telling you to get in a sidelines position if you weren't in one already. Don't expect much out of Bitcoin in the near-term as the Bitcoin bears still look to be in control.