Chicago just took a big step toward becoming the cannabis capital of the Midwest. Not only would that be good for the broader US cannabis industry – it would be great news for two young and promising cannabis companies operating a string of cultivation facilities and dispensaries all across Chicago and Illinois.

Pritzker is a major advocate of legalization. It was a staple of his campaign and now that he has won Pritzker says his goal is to legalize recreational cannabis as quickly as possible.

According to a recent report from the Chicago Tribune, Illinois legislators are expected to introduce a bill as early as January that could be passed by May.

Sponsors plan to introduce a new legalization bill in January and hope to get it passed before the session ends in May. The proposed measure would allow the commercial sale and regulation of marijuana, similar to alcohol, for adults 21 and over. There would probably be a six-month waiting period for officials to draw up rules before issuing licenses for growing and selling it. Sponsors say existing medical marijuana companies would likely get the first crack at sales.

According to a report from the Illinois Department of Public Health, more than 46,000 Illinoisans have used medical cannabis this year, up 80% from last year.

That’s a nice growth rate – but only a fraction of Illinois’s 12.8 million citizens. That’s because Illinois has one of the most restrictive medical cannabis programs in the country. This has prevented many potential patients from receiving treatment. Moving forward Illinois is in the early stages of expanding access to medical cannabis. That should keep Illinois medical sales expanding for years.

Between a flourishing medical cannabis program and the potential legalization of recreational cannabis – Chicago is quickly looking like a major player in the US cannabis industry.

The non-profit Illinois Economic Policy Institute and the University of Illinois’ Project for Middle-Class Renewal released a report on the potential size and impact of legal cannabis on the Illinois economy. The numbers are eye-popping.

The report projects that legalizing recreational cannabis would add $1 billion annually to the Illinois economy and create 23,000 jobs and 2,600 businesses. The co-author of the report used Colorado as a model for Illinois.

Illinois’ cannabis potential has not gone unnoticed. I am seeing a flood of capital hitting the market as some of the brightest and best-funded entrepreneurs scramble to cash in on legalization.

Green Thumb Industries (GTI,GTBIF) is a multi-state cannabis company headquartered in Chicago. In total, GTI has eight manufacturing facilities and licenses for 60 retail locations across eight highly regulated U.S. markets. With a market cap of $1.3 billion, Green Thumb is one of the largest cannabis companies in the US Illinois.

GTI rallied with the broader cannabis sector late this summer before falling in October and November. Take a look below. 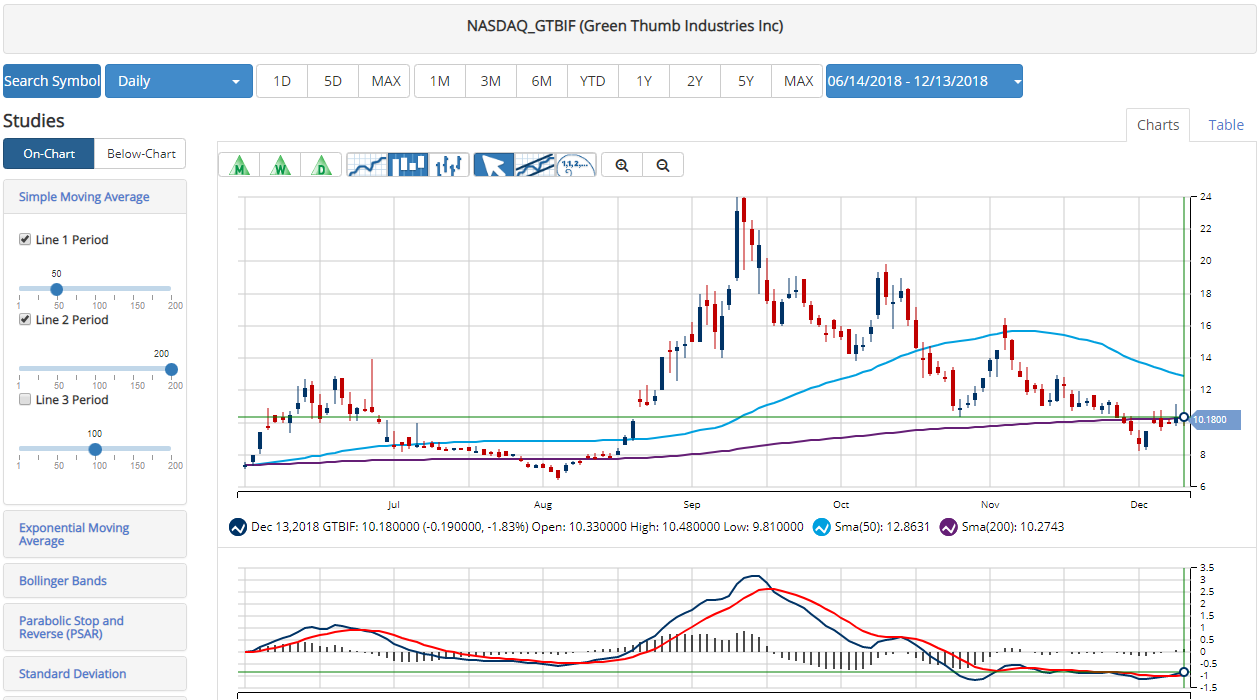 Shares of Cresco just began trading on the CSE on December 3, so this is a new stock to the exchanges.

Cresco is in position to capitalize if Illinois legalizes recreational. The company has been making big moves to expand production capacity in Illinois.

On November 7, Cresco announced major cultivation expansion in Illinois. Here are some more details directly from the press release.

At Cresco’s cultivation facility located in Lincoln, Illinois, a two-phase expansion of 135,000 square feet is planned, with an initial 15,500-square-foot addition launching early in the first quarter of 2019 and the second phase of 120,000 square feet slated for the third quarter of 2019. In total, the cultivation expansion at Lincoln is expected to triple Cresco’s overall Illinois production over the course of the next 12 to 16 months.

Illinois is on the cusp of legalizing recreational cannabis. That would quickly transform Chicago into the cannabis capital of the Midwest and make Illinois one of the fastest growing cannabis markets in the world. Green Thumb and Cresco are early cannabis industry leaders with a growing footprint in Illinois. For investors looking to cash in on Illinois, these are two companies to keep an eye on.