Hello traders everywhere. Mid-week things were looking positive for the stock market overall as fears of a long-term trade war with China lessened on news that the U.S. and China began to talk about settling the disagreement. However, weak economic data from China and Europe rekindled fears of slowing global growth, and Johnson & Johnson (JNJ) is leading the lower sustaining significant losses after Reuters reported the company knew for decades that asbestos lurked in its Baby Powder. 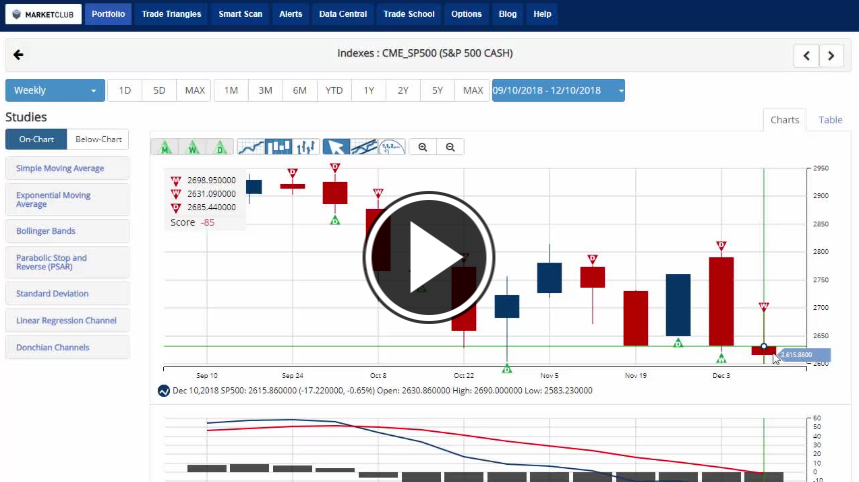 All three indexes are suffering losses over 1.3% on the day which has effectively erased the weekly gains that all three indexes were looking to post. The DOW will end the week in negative territory losing almost one percent at -.90%. The S&P 500 will post a weekly loss of around -.80%, and NASDAQ is trying to finish the week unchanged floating between and gain and loss for the week.

Crude oil is once again testing the $50 level trading as low as $50.89 in earlier in the week before settling just above the $51 level. Crude has traded in the narrowest range since early 2017 so far this month as investors assess the production cuts pledged (1.2 million barrels a day) by the so-called OPEC+ coalition led by Saudi Arabia. At weeks end oil will post a weekly loss of -1.9%, it's first loss in two weeks.

Gold is joining the weekly loss crowd as well, losing almost one percent at -.80% on the week after posting a +2% gain last week. With a green weekly and monthly Trade Triangle look for gold to head higher as we close out 2018.

Bitcoin continues to be firmly in the bitcoin bear trap losing over -6.5% on the week trading close to the $3000 level at $3100. Interestingly it's sitting right on its 200-week MA which stands at $3163.93. A move below this level could prove catastrophic for the cryptocurrency.

Key Events For Investors To Watch Next Week: