Hello traders everywhere. What looked to be a positive day for the stock market has quickly turned negative. The DOW was up as much as 296 points in early trading, all but erasing Tuesday's losses, only to fall into negative territory as afternoon trading commenced. Tuesday saw the worst single-day losses for the stock market since Jan. 3 of this year with all three indexes losing over one percent, ending four straight days of gains. Both the S&P 500 and NASDAQ are trading in negative territory as well. 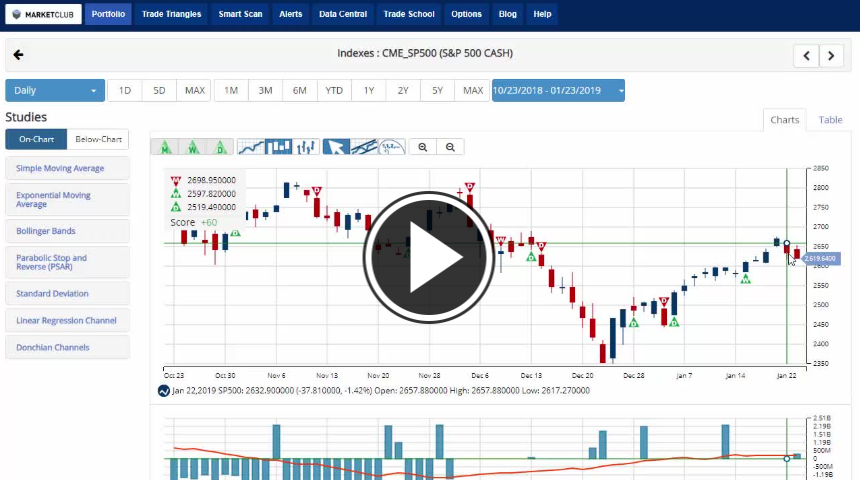 The U.S. dollar has flattened out this week after posting a weekly gain last week, the first weekly gain in four weeks. Uncertainties over trade and the global economy will probably keep the dollar in a tight trading range.

Crude oil has had back to back daily losses over 1%, and it issued a new red daily Trade Triangle on Tuesday at $52.37 signaling that a short-term sidelines position is in order. Oil has shed The reason for the move lower, weak Chinese and South Korean economic data and the International Monetary Fund (IMF) cutting its forecasts for the global economic growth to 3.5% in 2019 and 3.6% in 2020.

Gold issued a new red weekly Trade Triangle to start the week ending after posting a weekly loss last week; it's for weekly loss in four weeks. The $1,300 level looks to be a strong level of resistance for gold. The last time gold traded above that level was in June of 2018.

Bitcoin is currently experiencing it's longest period of consolidation in three months with no reprieve in sight. If you take a look at the 10-week MA, you'll see that it's approaching the 200-week MA which could signal that a big move lower in on order.