Hello traders everywhere. After a weak opening to the week, stocks are on the rise, led by Netflix. With Netflix leading tech-related stocks higher the S&P 500 and DOW have triggered the new green weekly Trade Triangles that I discussed last week. All three major indexes are now in a sidelines position with Chart Analysis Scores of +70. However, the S&P 500 and DOW are still trading well below their 50-day moving average. Meanwhile, the NASDAQ is close to breaking through it's 50-day moving average. 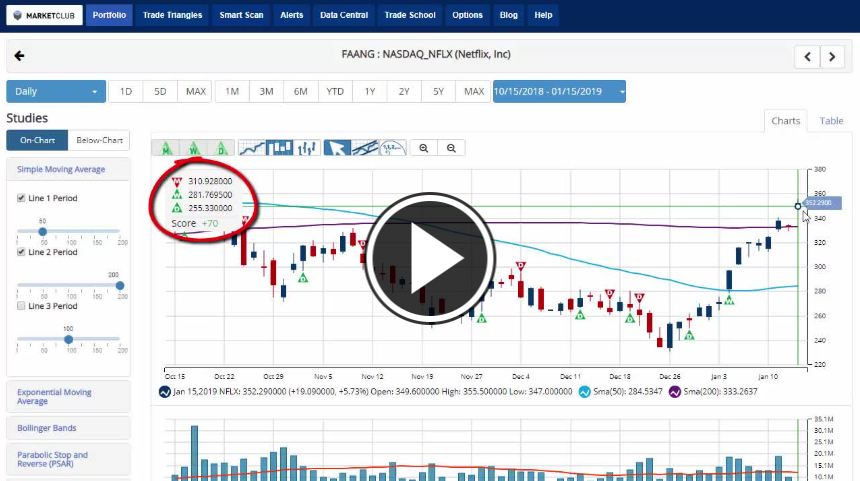 Netflix Inc. (NFLX) shares jumped over 5% after the company announced it would hike prices to its monthly memberships by 13 to 18%. This will be the company's biggest price hike since it launched its streaming service more than a decade ago. That's led the FAANG stocks (Facebook, Amazon, Apple, Netflix, and Alphabet) higher with all of them rising more than 1% on the day.

After two days of losses, crude oil is on the rise gaining over 1.5% on the day amid production cuts by OPEC and Russia as well as signs of lower U.S. oil stocks. However, most analysts believe that this rally will be short lived after data showed weakening imports and exports in China, raising new worries about a global slowdown.

Gold prices are trading slightly up this morning after hitting a new three day low triggering a red daily Trade Triangle as the U.S. dollar index has backed down from its overnight high following another very tame U.S. inflation report. U.S. producer prices fell by the most in more than two years down -0.2% from November. This is another piece of economic data that could lead the Federal Reserve to stand pat on interest rates.

Bitcoin continues to be trapped in a tight trading range finding it difficult to break resistance and trade above it's 50-day moving average. On the other side, the 200-week moving average continues to provide a strong level of support at $3,251.94. A break below that level could lead to a test of the December low standing at $3,122.