Hello traders everywhere. The stock market is stumbling into the finish of the week ending a five-day win streak. But overall it will finish up for the week making this the third straight week of positive gains. Reason for the weakness today, China and the government shutdown that doesn't seem to be ending anytime soon.

All three major indexes are ending the week with positive gains. Both the S&P 500 and DOW are posting gains of about +2% for the week, but both indexes are still waiting for the green weekly Trade Triangle to appear signaling a move to the sidelines. The NASDAQ did issue a green weekly Trade Triangle this week and will end the week with an impressive +3% gain. 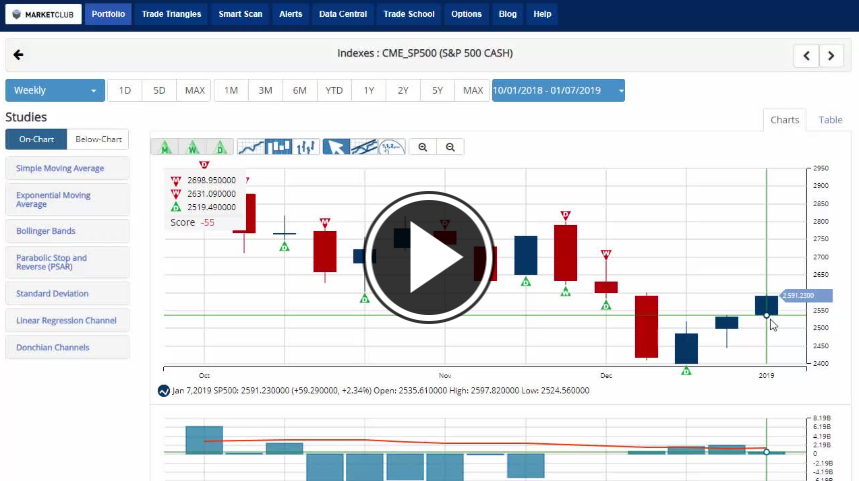 The U.S. Dollar continues to be under pressure dropping -.64% on the week making this the fourth straight week of declines.

Crude oil has had another monster week posting a +7% gain for the second week in a row. However, much like the overall stock market, it is down about 1% on the day. This drop comes after nine straight days of gains and is most likely just some profit taking by traders.

Gold has benefited from recent comments by the Federal Reserve indicating that they are willing to stop its interest-rate increases in 2019 if growth slows. Those comments help spur gold to a fourth straight week of gains by posting a modest gain of +.25%.

Bitcoin continues to be trapped in a tight trading range and will lose -4% on the week. This large weekly drop is due to Bitcoin's biggest daily drop in seven weeks that it suffered on Thursday as it tried to break through the $4,100 level. The Thursday drop pushed the cryptocurrency back below it's 50-day MA. However, it still remains just above its 200-week MA which currently stands at $3,235.34. Amove below that level could be disastrous.