Hello traders everywhere. The DOW cracks 26,000 for the first time since November as the U.S. and China wrapped up another round of trade talks which has left investors increasingly more hopeful a deal will be struck soon. The move higher by the DOW, S&P 500 and NASDAQ have put new green monthly Trade Triangles within reach for all three major indexes next week. As it stands right now the DOW needs to trade above 26,277.82, the S&P 500 above 2,815.15 and the NASDAQ needs to top 7,566.93 for the new green monthly Trade Triangles to trigger. 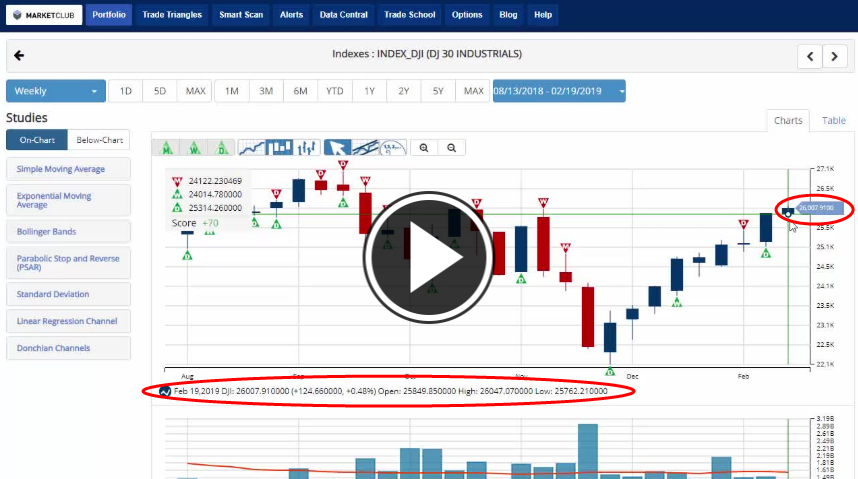 The U.S. Dollar slipped into negative territory losing -.47% making this the first weekly loss in three weeks. The move lower can be directly related to the U.S. - China trade talks as President Trump is set to meet with Chinese Vice Premier Liu He later on Friday. The meeting comes after a U.S. delegation met with Chinese President Xi Jinping last week.

Crude oil is trading higher for the week with a +2% gain on lowered OPEC production and hopes that the trade war between China and the U.S. might be drawing to a close. The strong bearish signal came from the United States on Thursday, with the Energy Information Administration showing that production reached 12 million barrels per day for the week ending February 15, months ahead of what the EIA originally had thought, and 100,000 barrels per day over production from the previous week.

Gold will post a +.70% gain for the week after some volatile trading mid-week where gold tried to trade above 1,350 before plunging back to the 1,325 level. The significant move lower was nothing more than profit taking and traders have bought the dip and pushed gold back to the 1,334 level as we close out the week.

Bitcoin made a tremendous move higher at the end of last week triggering that green weekly Trade Triangle we've been waiting on at 3,711.04, but that move higher has stalled out. Bitcoin is once again trading in a flat range this week hovering just below the 4,000 level.