The edibles market has quickly evolved into one of the fastest growing cannabis subsectors.

With Canada set to legalize edibles this year and more US states legalization medical and recreational cannabis, annual sales of edibles in the US and Canada could hit $4.1 billion by 2022.

While Dixie Brands (DIXI, DXBRF) is still my favorite edibles company right now, I see another promising cannabis company that is already cashing in on the edibles trend.

Slang Worldwide Inc. (SLNG) is headquartered in Denver, Colorado and is an early leader in the high-growth, US edibles market.

Slang operates in ten US states, including high-growth states such as Colorado, Nevada, and California, and plans to be in ten more states by the end of the year. Its products are sold in more than 2,600 stores and across five continents.

Slang specializes in edibles and extracts, and it owns some of the most popular, best-selling products in the market.

For example, Slang’s O.penVAPE, is the second-best selling U.S. legal cannabis product with $187 million of sales from 2014 through November 2018 according to data from cannabis research firm BDS Analytics that was shared by Slang.

I Expect Slang to Prosper Because of Four Powerful Profit Triggers

# 1 – One of the Best Management Teams in the Cannabis Industry

Slang was founded by Peter Miller and Billy Levy. These two men co-founded Mettrum Health, a Canadian cannabis company that was sold to Canopy Growth Corp (CGC) in 2017 for $430 million.

Slang has some potential deals with Canopy brewing. Here’s how Bloomberg explained it, “Slang has operations in Canada through Agripharm Corp., a licensed cannabis producer that’s 20 percent owned by Slang and 40 percent owned by Spectrum Cannabis Canada Inc., a subsidiary of Canopy. Canopy has a warrant that allows it to acquire 32 million shares in Slang, or about 15 percent of the company, if the U.S. legalizes cannabis at the federal level. The warrant is tied to a collaboration agreement that would see Canopy and Slang partner on distribution, marketing and research.”

Slang is already operating in Canada and a total of five continents. However, the company has plans for more expansion into international markets. Slang will use $66 million raised in a September financing and proceeds from its public offering to expand into Europe and South America.

Slang began trading on the Canadian Securities Exchange last week and had a pretty solid showing in price and volume.

Shares started trading at $2.10 but quickly fell to $1.68. Shares finally stabilized and started grinding higher, closing the session near the daily high. 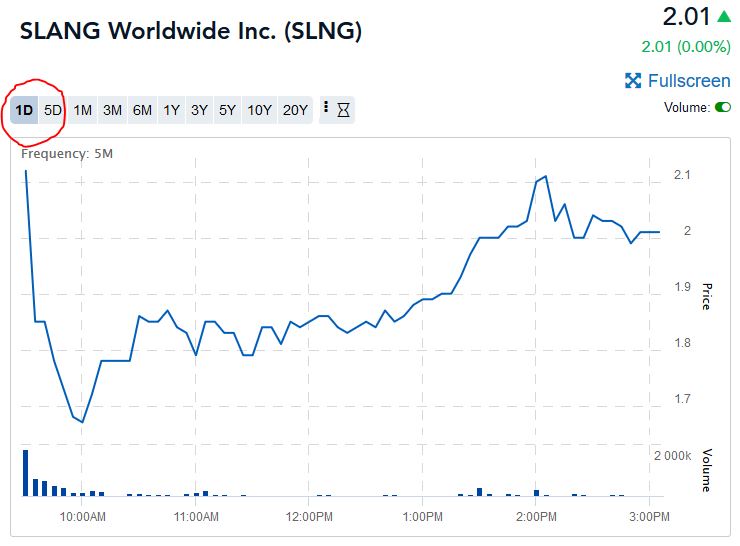 I see trading volume of close to 9 million – that’s a very solid start and this ticker should be plenty liquid for most investors.

Is there a US Ticker Symbol?

For the time being, I do not see a US ticker. However, I do expect one sooner than later.

I expect the US cannabis edibles market to be red hot in the next four years. I already see a wave of new cannabis companies going public in an attempt to cash in on that bullish trend, and I expect good things from Slang Worldwide Inc. (SLNG).