Israel just became the fifth country in the world to legalize medical cannabis exports after its cabinet voted to approve a sweeping new cannabis law.

Here are some more details from Reuters.

The bill, backed last month by parliament, allows companies approved by the health regulator and police to export medical cannabis to countries that permit its use. Israeli media said exports could start in as little as nine months.

Some lawmakers had tried to block the legislation, fearing more cultivation could push more drugs onto the streets at home.

Israeli companies – benefiting from a favorable climate and expertise in medical and agricultural technologies – are among the world’s biggest producers of medical cannabis.

This legislative move places Israel into a very small group of countries in the world, and the export news comes at the perfect time. The global cannabis market is expected to explode in the next few years.

According to Arcview Market Research, one of the most respected cannabis market research firms in the industry, global annual cannabis sales will reach $32 billion in 2022 and $57 billion by 2027.

Israel is in a great position to capitalize on the booming industry. Israel was one of the first countries to approve medical cannabis and it has one of the best pharma and medical research industries in the world.

Israel expects to begin exporting cannabis by the middle of 2019 with Germany, Austria, and Mexico as potential trade partners.

Analysts predict that Israeli’s annual cannabis exports could range between $1 billion and $4 billion as the market expands and matures in the next decade.

Shares are listed on the Tel Aviv Stock Exchange under InterCure Ltd. (INCR.TA). I see average daily trading volume of about 1.2 million so this ticker is plenty liquid.

Shares also trade in the US OTC (over-the-counter) under the ticker symbol IRCLF. I see average daily trading volume around 10,000 – this ticker is less liquid than the Tel Aviv ticker but it should still be liquid enough for most investors.

Intercure is a holding company of medical firms. Intercure made a bold entry into the cannabis sector last September when it purchased Canndoc, an Israeli medical cannabis leader.

Canndoc has been producing and selling medical cannabis for almost ten years – it was one of just eight companies granted a license to sell medical cannabis directly to consumers a decade ago.

Today Canndoc is still one of the few medical cannabis companies with significant operations, including well-developed products and revenue.

Looking forward, I expect big things from InterCure and Canndoc.

The company’s chairman is Ehud Barak, the former Prime Minister of Israel. That gives Intercure some major political clout in a heavily regulated industry.

Intercure is set to majorly ramp production. The company’s goal is to increase production from 5 tons to 100 tons in the next 18 months.

With production set to skyrocket and exports now legal, Intercure plans to expand into 10 countries in the next two years.

Intercure is looking to fund this expansion by listing its shares on the NASDAQ exchange in 2019 in order to raise an additional $50 million in capital.

Shares Going Vertical on the Chart

Intercure jumped higher in September after announcing it was buying Canndoc. 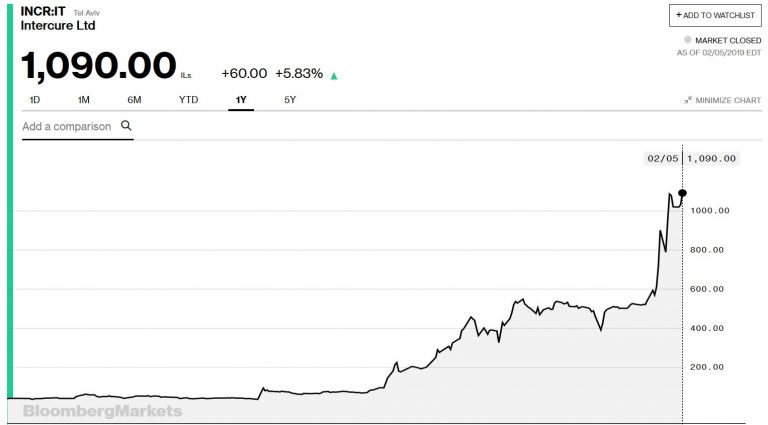 Intercure looks overbought in the short run. But in the long run, this is still a very early stage cannabis company with tons of growth potential. Its current market cap of $250 million is still relatively small even by cannabis sector standards.