The Energy Information Administration released its Short-Term Energy Outlook for February, and it shows that OECD oil inventories likely bottomed last June at 2.806 billion barrels. It estimated a 12 barrel gain for January to 2.875 billion, 10 million barrels higher than a year ago.

Throughout 2019, OECD inventories are generally expected to rise after June. At year-end, EIA projects ending the year with 2.957 million barrels, 94 million more than at the end of 2018.
For 2020, EIA projects that stocks will build another 105 million barrels to end the year at 3.062 billion. That would push stocks into glut territory. 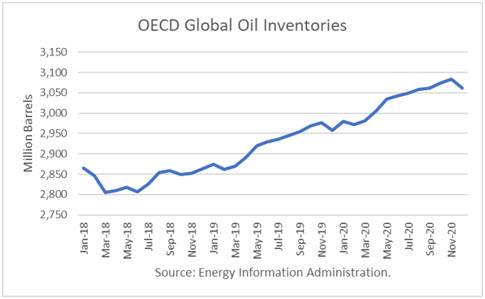 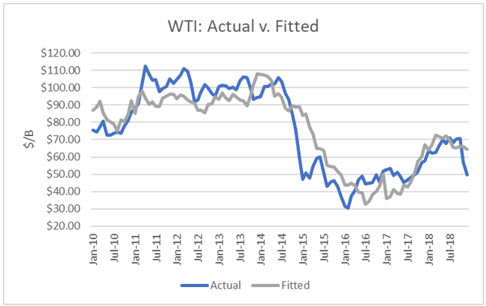 I used the model to assess WTI oil prices for the EIA forecast period through 2019 and 2020 and compared the regression equation forecast to actual NYMEX futures prices as of February 12th. The result is that oil futures prices are presently undervalued until June 2019. 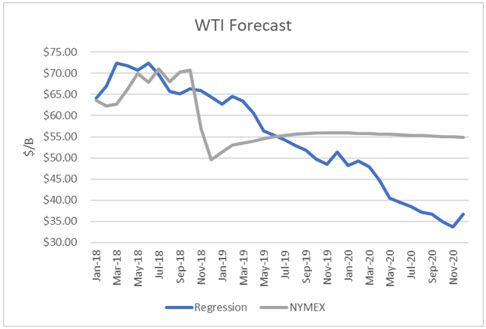 Based purely on this model, the oil price crash in the fourth quarter was overdone. However, the market was shocked by the sudden oversupply since it was expecting an undersupply once sanctions went into effect.

Following the build in January, OECD oil inventories are not projected to build again until July. That, in addition to uncertainties around Venezuela and Iran, could keep prices in the $50s in the months ahead.

However, the NOPEC legislation – No Oil Producing and Exporting Cartels Act – in the U.S. Congress is progressing. The House Judiciary Committee approved the bill, and it will be considered by the full House. There is bipartisan support.

Given President Trump’s view of OPEC, he is likely to sign it, if given the opportunity. This development could throw a wrench into OPEC’s coordinated cutback. It has already discouraged Russia and other non-OPEC countries not to formalize their OPEC+ agreement, which OPEC has wanted to ‘institutionalize.’

Russian Energy Minister Alexander Novak said on December 28th that "(T)here is a consensus that there will be no such organization. That's because it requires additional bureaucratic brouhaha in relation to financing, cartel, with the U.S. side.” He was reportedly referring to the potential to expose non-OPEC producers to U.S. sanctions if they joined with the cartel.

On Monday, OPEC Secretary General Barkindo said, “OPEC is neither a cartel nor involved in the business of fixing oil prices.”

However, in Article 2B of their Statute, it states, “The Organization shall devise ways and means of ensuring the stabilization of prices in international oil markets with a view to eliminating harmful and unnecessary fluctuations.”

The U.S. Supreme Court has explained, ‘[u]nder the Sherman Act, a combination formed for the purpose and with the effect of... stabilizing the price of a commodity in interstate or foreign commerce is illegal per se.’

If the NOPEC legislation is passed, Saudi Arabia would undoubtedly leave OPEC. The result would probably mean a production free-for-all and market crash.