Hello traders everywhere. After a tough week where we saw the market sell-off over -2% the market bounced back with some vigor. Both the S%P and NASDAQ are posting gains over +2% while the DOW was fighting to stay in positive territory after being weighed down by steep losses by Boeing in early trading, but Boeing is making a comeback as we enter afternoon trading.

In fact, the NASDAQ will post its best week of the year with a gain over +3.6% and that will also be the 11th positive week in the last 12 weeks. The S&P 500 will have a weekly gain of +2.7% and the DOW brings up the rear with a weekly positive gain hovering right around +1%. 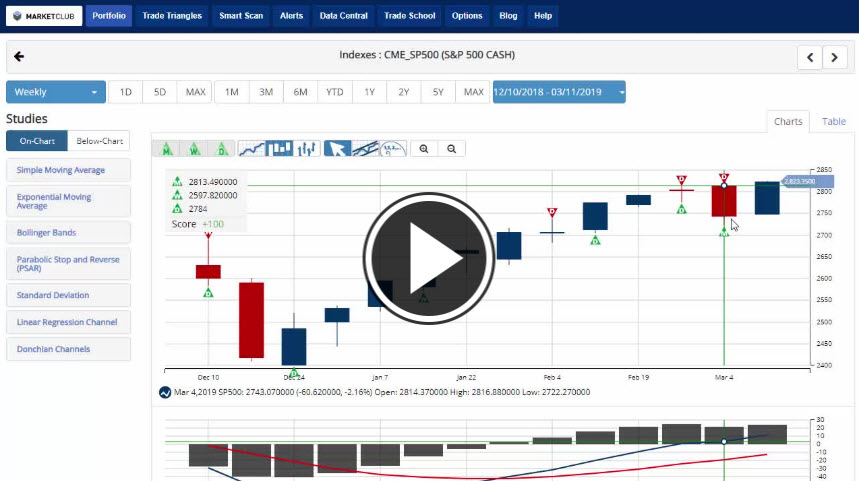 The U.S. dollar hasn't faired as well losing -.8% as traders await news on a Brexit deal. After votes on Tuesday and Wednesday, the UK parliament is back in session today for a third (and hopefully final) vote this week. After rejecting UK PM Theresa May’s deal on Tuesday then rejecting then a no deal, “hard Brexit” on Wednesday, all signs point to UK parliament voting in favor of an extension to the negotiating window, currently set to expire on March 29.

Elsewhere, gold's advance pushed its 40-day volatility to the highest this year while gaining +.45% for the week. WTI crude fell to near $58 a barrel as the International Energy Agency said OPEC nations have enough spare capacity to make up for any supply shock from the escalating crisis in Venezuela. Oil will post a weekly gain of +4%.

Bitcoin is having a relatively quiet week overall remaining unchanged for the week and holding steady around the $3,900 level. Bitcoin's daily trading volume remains elevated at highs above $10 billion, going against the technical theory that investor interest tends to drop during periods of consolidation. Therefore, the ongoing sideways trading near $3,900 may end with a bull breakout toward the recent high of $4,207.