The economic impact on the U.S. and the world economy was devasting. It caused a massive recession in 1974-75, even though the embargo was lifted in March 1974. The Saudis and other OPEC producers learned how “inelastic” (i.e., non-responsive to price) gasoline demand was and their ability to stuff their coffers even with small cuts to production.

However, this episode led to legislation to build the Strategic Petroleum Reserve (SPR) as a means to offset future supply disruptions and even deter them. At present, the SPR contains roughly 650 million barrels of crude oil located in underground salt domes across the Gulf Coast.

The drawdown capacity is rated at 4.4 million barrels per day. And supplies can begin flowing into the pipeline system with 13 days of a presidential order to commence.

Saudi Arabia appears to be attempting to starve the US of oil supplies in a “mini-embargo.” The idea would be to signal to the world that oil supplies are lower than otherwise would be reported internationally. 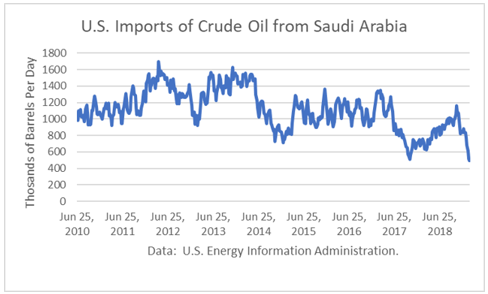 In the week ending February 22nd, imports from Saudi Arabia totaled 346,000 b/d, the lowest one-week level in the data series going back to 2010. The four-week trend of 491,000 b/d was also the lowest, and 23 percent lower than a year ago. This level does not even meet the requirements of Saudi Aramco’s Motiva refinery at Port Arthur, Texas, which has a capacity of 636,500 b/d.

The Saudi mini-embargo to the U.S. may backfire by angering him. It would be a simple matter to replace Saudi imports altogether with a drawdown from the SPR until U.S. production rises another 500,000 b/d. Furthermore, the U.S. could replace Saudi barrels with imports from other sources, Iraq for example.

The Saudi ploy to drain U.S. crude inventories in support of oil prices is doomed to failure. U.S. domestic supply has risen greatly, and the net import need has dropped dramatically in the past year. The demand for OPEC’s oil is projected to drop by 1.0 million barrels per day in 2019. In 2020, the EIA projects that the U.S. will be a net oil exporter.

Furthermore, it could backfire if Trump calls for the NOPEC legislation – No Oil Producing and Exporting Cartels Act - to be passed. The House Judiciary Committee approved the bill.