Still, the report wasn't all doom and gloom. The unemployment rate ticked down to 3.8% from 4% a month earlier, while wages rose 3.4% from a year earlier, the strongest pace since April 2009. 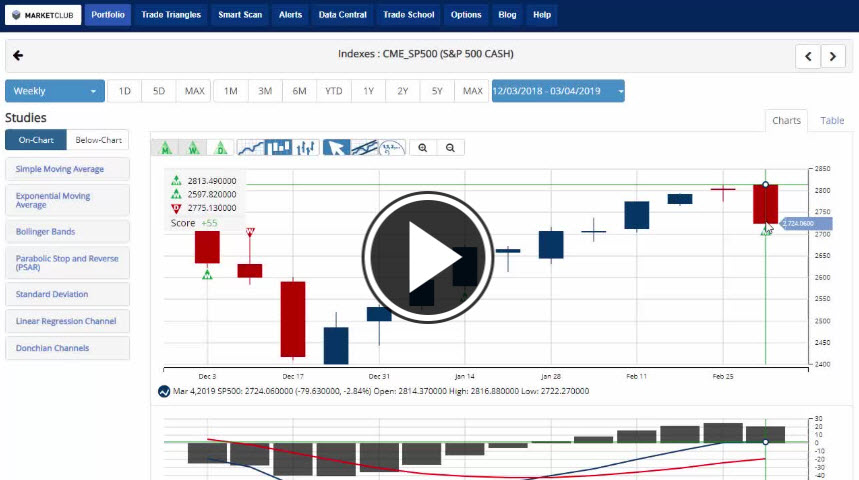 For the first time since December, all three indexes will post weekly losses over -2.6%. The DOW did finish last week with a slight loss of -.02%, the s&P 500 had a weekly loss of -.22% in January, but this will be the first weekly loss for NASDAQ, breaking a 10-week winning streak. Both the S&P 500 and NASDAQ issued green monthly Trade Triangles recent, but the DOW remains in a sideline position with a red monthly Trade Triangle.

Even with the U.S. - China trade talks taking longer to solve, a slowing global economy and a Chinese economy that showed its exports slumped 20.7% from a year earlier, far below analyst expectations and wiping out a surprise jump in January the U.S. dollar will post a weekly gain of +.94% marking its first weekly gain in two weeks.

Crude oil was down over -1% in early trading, but as we enter the afternoon it has made some gains, but it's still likely to post its second week of losses. Oil's big drop today comes on news of strong U.S. production and a buildup in the nation's crude stockpiles. American drillers are pumping at records near 12 million bpd, according to preliminary weekly data. Meanwhile, U.S. crude stockpiles surged by 7.1 million barrels in the week through March 1, the Energy Information Administration reported.

Gold jumped over +.80% on the day as concerns over weak economic growth made investors avoid riskier equities and raise their bets in the safe-haven metal. That Friday push higher will help the precious metal posted a weekly gain of +.32%.

Bitcoin continues to trade above both it's 50 and 100-day MA's but has failed to break through the physiological $4,000 the past twelve days and seems to be once again trapped in a tight trading range.